The Port of Prince Rupert is on pace for a record year amid a global resurgence in the cargo container industry.

The port's Fairview Container Terminal, which has added longer berths and new cranes to nearly triple its cargo capacity, is riding a wave of rising imports from Asia.

Freight container volumes increased by 18 per cent in the summer, compared with a year ago, contributing to an expected 23 million tonnes of all cargo types at the B.C. gateway, said port spokesman Kris Schumacher.

The port in the city of 12,000 people is marking a record year amid a rebound in volumes and prices for container ship owners.

The world's shipping lines are emerging from years of bankruptcies and consolidation after cargo-carrying rates plunged due to an oversupply of ships in a soft economy. Shipping rates fell by 13 per cent between 2013 and 2016 as carriers took delivery of ships ordered years earlier.

The crisis claimed several carriers, including South Korean giant Hanjin Shipping Co. Ltd., and forced many of the remaining companies to merge or form alliances to save costs and reduce the number ships chasing business.

"In the years to come, Hanjin's collapse could well be viewed as the crucial watershed moment in the shipping industry's recovery," said Simon Heaney, a manager of research at Britain-based Drewry Shipping Consultants Ltd.

"The industry outlook is a lot rosier than it was," Mr. Heaney said. "But carriers are not there yet."

Container rates rebounded by 15 per cent in 2017, Drewry said, but the recovery is threatened by new vessel deliveries that will nudge fleet growth past demand growth in 2018. Mr. Heaney predicts shipowners trying to stay afloat will again be forced to scrap or dock ships, delay new vessel deliveries, and cancel routes or move ships to busier freight lanes.

"Capacity is shrinking but there are still too many ships," Mr. Heaney said.

Three ships a week call at Prince Rupert's container port, and there is room on the schedule for one more, Mr. Schumacher said.

Container imports are dominated by auto parts (44 per cent) and textiles (22 per cent) while paper and lumber account for 62 per cent of exports, most of which is destined for China.

Sixty-five per cent of the inbound containers move by rail to U.S. cities – Chicago, Memphis or Detroit, while 35 per cent of the boxes travel to Toronto, Montreal or Calgary.

The cargo box terminal, now owned and operated by Dubai's DP World, opened 10 years ago in a port dominated at the time by bulk coal exports to China. The port, far from any large city, was seen as an unlikely spot to receive freight containers, which move from ship to train or truck and are used to move consumer goods and machinery, among other items.

However, the port is usually the first stop for ships from Asia. And it boasts faster transit times – by about a day – with Canadian National Railway Co. to Chicago, Toronto and other major hubs, than from Seattle or Los Angeles.

CN, whose network includes container ports in Vancouver, Montreal, Halifax and New Orleans, said its container volumes rose by 20 per cent in the third quarter, compared with the same period a year ago.

In response to the jump, CN has recalled laid-off employees, hired crews and returned to service 100 locomotives that were mothballed. This is on top of the 22 new engines that were ordered in the first quarter, said Mike Cory, CN's operating chief, on a recent conference call.

To handle the record number of containers moving through CN's box terminal in Brampton, Ont., the company added tracks and cranes and reopened a nearby rail yard. CN also plans to build a $250-million facility in nearby Milton, Ont., that will transfer containers between trains and trucks. 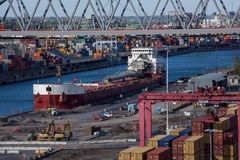