In their continuing fight for the home, BCE Inc. and Rogers Communications Inc. are racing to roll out faster networks while they capitalize on different strengths to win television and Internet customers.

In separate announcements this week, the rivals underscored investments they're making to support download speeds of one gigabit per second – the new frontier in high-speed Internet, crucial for the growing number of connected devices, data-hungry applications and advanced television platforms.

On Monday, BCE revealed plans to spend $854-million in Montreal as it extends its fibre-to-the-home push with plans to reach more than half of that city by 2020. Meanwhile, Rogers highlighted its own network upgrades – the company now offers gigabit speeds across its entire service area – with the launch of a project Thursday to connect 20 Toronto-area schools with super-fast Internet at no cost.

Although both cable and telephone companies now deliver the same products – home phone, wireless, Internet and television – they started out with different network technologies, which has led to a sort of leapfrog evolution as they each invest to match or best their competitor.

For subscribers: Cable wars: Shaw, Rogers in a fight to take back TV

In recent years, telephone operator BCE gained an edge on the television front with its Fibe TV Internet protocol television (IPTV) product, winning cable customers away from Rogers in its key Ontario market.

Rogers – which has not yet launched a next-generation television platform that can rival the advanced functions and responsiveness of IPTV – has hit back with faster Internet plans at appealing prices, making use of its speed advantage over BCE's older DSL (digital subscriber line) service.

Rogers is hoping the strength of its Internet product will help tide the company over to 2018, when it plans to launch X1, a cloud-based television platform it is licensing from U.S. cable giant Comcast Corp. But BCE is in the midst of a $1.14-billion investment in fibre services in Toronto, and says it will complete the majority of that build out by the end of this year.

Dirk Woessner, president of Rogers consumer business unit, says customers "really appreciate the quality of our Internet product," but admits that many subscribers are interested in bundles of phone, Internet and television.

"Obviously, if you have a strong Internet product, that helps you through the way," he said in an interview Thursday, adding that the traditional cable television product still works for many people. "As long as you have good working services – and we have a breadth of programming that's available – it is sufficient for many of our customers. But then, some customers want the newest solutions, so we're going to provide it for them soon."

While telephone companies must invest in bringing fibre directly to customers' homes to deliver Internet speeds of one gigabit a second, cable operators can make software and equipment upgrades to their core networks without making more costly changes to the so-called "last mile."

Rogers has completed its upgrade to the next generation of cable technology (known as DOCSIS 3.1) and said Thursday that between itself and BCE, the city of Toronto is now covered by gigabit Internet services.

As a companion initiative to its Connected for Success corporate responsibility program, Rogers launched a pilot project to serve 20 Toronto District School Board [TDSB] locations with gigabit Internet service at no cost. The TDSB picked locations that most needed an upgrade because they were working with slow service, typically smaller schools, such as East York Alternative Secondary School, where Ontario Education Minister Mitzie Hunter was on hand to announce the project's launch Thursday morning.

Telecom providers say that as people use more connected devices to stream video and other applications – such as gaming-use virtual reality technology – the need for gigabit speeds in individual homes will grow. But it's already crucial in school environments, Mr. Woessner said. "When you have 10 or 15 people accessing the Internet at the same time, speed becomes a bottleneck."

It costs cable companies such as Rogers and Videotron Ltd., which is BCE's biggest competitor in Quebec, about $250 to $300 a home to upgrade their networks and provide gigabit speeds, according to an estimate by Desjardins Securities Inc. analyst Maher Yaghi. In contrast, he estimates it costs BCE from $1,000 to $1,500 a home to make its fibre-to-the-home upgrades.

However, in both Toronto and Montreal, BCE is making use of aerial options – such as hydro poles – to string its cables, which is cheaper than building underground. Barclay's Capital analyst Phillip Huang estimates it costs about $400 to $700 to connect homes using aerial infrastructure. He said that while 60 per cent of the build in Toronto had to be done through buried infrastructure, it will only be about 10 per cent in Montreal. 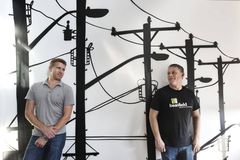