The company announced Mr. Crull's departure, effective immediately, as well as other executive appointments after markets closed on Thursday. In a statement, BCE chief executive George Cope thanked Mr. Crull for his work but also stressed the need to protect independence and trust in Bell Media's news outlets, which include CTV, the country's largest private broadcaster.

"Kevin Crull departs Bell with our thanks for his contributions to our customers and shareholders," Mr. Cope said in the statement.

Mr. Crull, 50, was angered by the Canadian Radio-television and Telecommunications Commission's March 19 decision to introduce "pick-and-pay" options for TV channels. Analysts expect BCE's revenues will suffer as a result of the new rules. The Globe and Mail revealed that Mr. Crull called CTV News president Wendy Freeman less than an hour after the decision and ordered her to exclude CRTC chairman Jean-Pierre Blais from coverage on Bell-owned networks.

At the time, Ms. Freeman told some staff she felt she would be fired if she did not comply, sources said. But with her support, senior journalists defied the order on a newscast later that night.

"Kevin has been a significant part of Bell's strategic transformation as he expanded Bell Media's leadership with major new investments in Canadian content, the successful integration of Astral and competitive innovations like CraveTV," Mr. Cope said in his statement.

"However, the independence of Bell Media's news operations is of paramount importance to our company and to all Canadians," he said. "There can be no doubt that Bell will always uphold the journalistic standards that have made CTV the most trusted brand in Canadian news."

Mr. Crull's directive marked a boiling point in a long-simmering feud between BCE and the federal regulator, which dates back to the communications and media giant's purchase of Astral Media in 2013. The CRTC rejected BCE's original bid before approving a revised offer. More recently, Bell and the CRTC have sparred publicly over a series of regulatory changes, some of which Bell is seeking to challenge in court.

In response to The Globe's reporting on March 25, Mr. Blais released a statement calling Mr. Crull's actions "disturbing." Later that day, Mr. Crull apologized for his "mistake," saying in a statement that "It was wrong of me to be anything but absolutely clear that editorial control always rests with the news team." He also said he had "relearned a valuable lesson."

Bell Media is a division of BCE Inc., which also owns 15 per cent of The Globe and Mail. Mr. Crull has been the shareholder representative for BCE on The Globe's board of directors.

It remains to be seen whether a change at the helm of Bell Media will ease the tension between BCE and the CRTC. The two sides have clashed over several recent decisions affecting the rules for traditional and mobile TV, including one that promises to allow U.S. Super Bowl ads to be broadcast in Canada. Bell owns the Canadian rights to the game, and stands to lose millions of dollars in revenue on a multiyear deal.

A CRTC spokesman declined to comment on Mr. Crull's departure.

In light of Mr. Crull's dismissal, Mr. Cope has shuffled Bell's executive ranks. Mary Ann Turcke, an engineer by training who has led Bell Media's sales and its local TV and radio division since November, is replacing Mr. Crull as president. 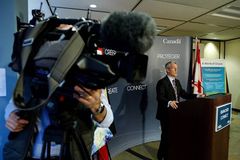