For up-to-the-minute coverage of Bay Street's biggest deals every day, exclusively for Globe Unlimited subscribers, visit Streetwise and follow us on Twitter at @StreetwiseGlobe.

Confidence is the most precious commodity for deal makers, and without more of it 2014 could be a quiet year in the business of mergers and finance.

Investment banking activity is tied to economic growth. When chief executives are positive about the outlook, and their companies are growing, they push to make transactions happen. At the moment, there's not much push.

"In the M&A [mergers and acquisitions] space, there's a lot of dialogue going on, but there doesn't seem to be any kind of urgency to get transactions done," said Jack Curtin, who heads Goldman Sachs Group Inc.'s Canadian operations. "People are going to be judicious."

There are signs of increased optimism about global economic growth, manifested in a long bull run in U.S. stocks. But there are still questions, chiefly around commodity prices and economic growth in markets such as China.

Those questions are especially crucial in a resource-driven market like Canada. In three of the last four years, more than half of the merger and acquisition activity involving Canadian companies has come from the resource sector – a business inextricably tied to growth and commodity prices.

"We seem to be sitting on a bit of a precipice: Where is the world economy going?," said Egizio Bianchini, co-head of the global mining group at BMO Nesbitt Burns. "The capital is there. The will to sell is there. The will to buy is there, but at the end of the day the will to pull the last little bit of the trigger is just not there."

Last year, that lack of will resulted in a plunge in activity by mining and energy companies. Chief executives who had made ill-advised acquisitions in previous years were turfed, prompting those that survived to duck for cover. Uncertainty about the outlook for commodity prices was reflected in a standoff between buyers and sellers. The paucity of transactions crushed profits at the many Canadian securities firms that focus largely on oil, gas and mining.

The year was saved only by an unexpected explosion of deals in areas such as real estate and retailing. That's unlikely to repeat. There are simply not many more huge deals that can be done in retailing after Loblaw bought Shoppers Drug Mart, Sobeys bought Safeway's Canadian stores and Hudson's Bay bought Saks. Real estate investment trusts, which were active buyers early in 2013, endured a selloff in their stocks and are now likely to be much quieter.

"For Canada it's pretty simple, in that to have a busy year you need an active resource business," said Doug Guzman, head of global investment banking for the capital markets arm of Royal Bank of Canada. "Mining has been flat on its back, but there are signs of life in the last couple of weeks – similarly in energy."

Among those signs are Canadian Natural Resources Ltd.'s recent $3.13-billion agreement to buy gas fields from Devon Energy Corp. and Goldcorp Inc.'s $2.6-billion hostile bid for Osisko Mining Corp. However, it's too early to call a full-on rebound.

If the global economy doesn't pick up, and the consensus shifts to a more sluggish outlook, any bounce back in resources will be snuffed out. However, the low interest rates that result will feed business in industries such as real estate and pipelines that benefit from investor interest in income.

There are other reasons to expect investment bankers to be busy. Bond markets are wide open, and equity markets are increasingly receptive, making it feasible to finance acquisitions. The technology sector features a slate of hot potential initial public offerings. A softer Canadian dollar may make Canadian companies attractive targets to foreign buyers.

Canada's pension funds are always busy, looking for acquisitions that throw off income to fund future payouts to retirees.

In addition, activist shareholders are still on the prowl, seeking to shake up companies. That often leads to assets being put on the market, such as the sale of Canada Bread by owner Maple Leaf Foods, which came about after a sustained push by an activist shareholder.

Walied Soliman, a lawyer at Norton Rose Fulbright who specializes in activism, suggests watching mid-sized companies in the $500-million to $3-billion value range. "That's where we see a lot of circling, a lot of calls to do due diligence, and where we are seeing the most nervous boards that are getting themselves prepared."

One obstacle to potential deals is Canada's takeover review process, which has spooked foreign investors. Yet another high profile takeover was blocked last year, as the government stepped in to stop the sale of telecom company MTS Allstream to an Egyptian buyer on national security grounds.

"The Canadian dollar valuation is helping with the notion of foreigners coming in, but there is still the uncertainty of how they will be treated, and that does add a wrinkle," said Kevin Morris, co-chair of the capital markets and corporate group at Torys LLP. He cited a client he spoke to last week about a deal in the telecom sector. "They were looking at it and decided not to do it."

While takeovers of big companies such as Shoppers Drug Mart mean paydays for advisers, they also contribute to a longer term problem – the thinning ranks of big Canadian companies.

"One of the limitations is that we don't have the number of significant public companies we once had," said Clay Horner, a merger specialist who is chairman of Osler, Hoskin & Harcourt LLP.

Given that, firms such as RBC and Canaccord Genuity that have built global businesses are now making as much or more money outside Canada than they are within its borders.

"Conditions are pretty good globally," said Mr. Guzman. "M&A has been the big missing piece globally, and that's started out reasonably busy in the U.S."

For Canada, mining and energy remain crucial – and there is an underlying belief that those sectors can't stay quiet for long.

"What's going to be different in 2014, and it's palpable – the mining sector is back in spades," said Patrick Meneley, who heads investment banking at TD Securities.

"Mining and energy are natural deal makers," said Roman Dubczak, head of equity markets at CIBC World Markets. "Sooner or later the bid and the offer will come together." 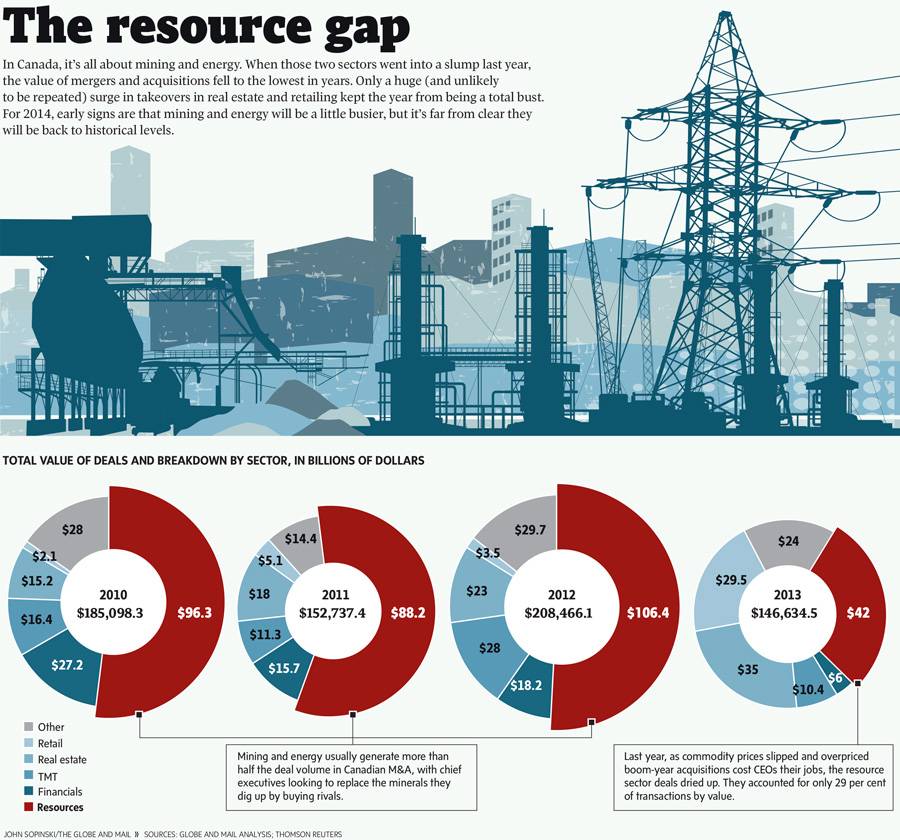