As Alberta's traditional corporate giants grapple with volatile oil and gas prices, a small but powerful company with roots in Red Deer is emerging as one of the province's future stars.

In the span of three years, Parkland Fuel Corp. has become a dominant force in the retail gas market, now owning and operating more than 1,800 service stations across Canada. Because its locations typically have convenience stores attached to them, Parkland is now the second-largest 'C-store' operator in the country, a footprint that offers scale similar to industry leader Alimentation Couche-Tard.

Not so long ago, Parkland was a sleepy company with muted growth, but it has been transformed by a strategy that leaned heavily on acquisitions. The magnitude of its deals keeps escalating and, in 2017, it inked the transformative $1.5-billion purchase of Chevron's downstream business in British Columbia, which included service stations and a refinery.

For all this growth, Parkland still isn't a familiar name for most Canadians – despite its $3.9-billion market capitalization. Yet fund managers who know the company tend to develop a deep appreciation for the potential. Sentry Investments' Michael Simpson has owned the stock for more than a decade and, in an interview, said he continues to be impressed by management's ability to deliver on its promises.

The current executive team has benefited from articulating a clear strategy – one that started with tackling efficiency and then morphed into growing by acquisition – and so far it has timed the market well. Parkland pounced when major energy companies sold assets to shore up their balance sheets, and when independent gas station owners struggled with succession issues.

The leadership team has also displayed something rarely seen in business: Humility. Parkland's chief executive officer, Bob Espey, openly acknowledges he and his team had to evolve after some early deal errors.

"We made some mistakes along the way," he said in an interview. "We had to learn how to buy effectively."

Early this decade, Parkland was a small enterprise. Its acquisition strategy picked up in 2013, with the purchases of Elbow River Marketing, which sells and transports petroleum products, and Sparlings, a propane retailer in Ontario, setting Parkland on a course to consolidate Canada's fragmented propane market.

Its pivot to become a retail fuel giant occurred in late 2014, when Parkland bought Pioneer Gas, which operated 319 gas stations in Ontario, for $378-million. A year later, the company acquired the majority of CST Brands Inc.'s Canadian gas stations, principally located in Quebec and Atlantic Canada, for $985-million. The transaction occurred after Couche-Tard bought CST and needed to divest the target's Canadian assets for competition reasons.

Then, in 2017, Parkland spent $1.5-billion buying Chevron's downstream business in British Columbia, which included 129 gas stations, largely located in Metro Vancouver, as well as a refinery in the province that supplied the stations and also added extra product for wholesale export. The deal rounded out Parkland's national footprint.

Today, the business is divided into three divisions: A retail gas and convenience-store arm that delivers a little more than half of Parkland's cash flow and operates under banners such as Ultramar and Esso; a supply and wholesale arm that delivers bulk fuel to resellers; and a commercial division that supplies propane and fuel to industrial clients.

The most recent deals got the most attention, but it was the Pioneer deal that, while small, paid unexpected dividends. "It gave us confidence," Mr. Espey explained. "We were surprised at how well we got synergies."

Once the acquisition closed, Parkland invested in the business – particularly the convenience stores – by changing physical layouts and mixing up the product selection. Soon after, the brand's same-store sales jumped 10 per cent annually.

It served as an epiphany of sorts: Parkland's targets were often trapped in larger organizations that didn't give them much love, or were owned by individuals who hadn't reinvested in them for quite some time. Spending some extra cash and focusing on employee morale could do wonders.

Parkland's senior executives talk candidly about focusing on the nitty-gritty of every single deal, rather than getting swept up in the hype of building a bigger company. "It's really easy to buy businesses," Mr. Espey said, but "it's really difficult to execute."

"What we recognized early on is that if you don't get it right, you destroy value," he added. Bringing two companies together can be a long slog and it often includes laborious, but crucial tasks, such as transferring data from the target's computer network onto Parkland's system.

When you merge two companies, "if you don't integrate them effectively and keep the employees engaged, customers leave," the CEO added. That sounds obvious, but it is often overlooked. A prime example: Sobeys Inc.'s acquisition of Safeway Inc.'s Canadian division, a deal that initially met low employee morale and suffered from the poor integration of an inventory-management system, resulting in a multibillion-dollar writedown.

To avoid such pitfalls, Parkland has invested in its own corporate development team, which external investment bankers say is top notch. More importantly, the company has also built an integration team. This discipline has helped win investors over, an evolution that was instrumental in completing Parkland's last two major acquisitions.

Before the CST purchase, Parkland hadn't tapped the market for fresh equity in five years, and during this respite, a new strategy was laid out. Yet Parkland needed to raise $200-million in equity to help finance the acquisition, so it had to ask for shareholder support.

Ultimately, investors stepped up with fresh funds – but that "was only possible because the management team had tremendous respect from their investor base," said Peter Jelley, a managing director at National Bank Financial, who has served as an adviser to Parkland.

Eight months later, Parkland went back to the well and leaned on its investors again – and this time, it needed $660-million to help fund the Chevron acquisition. In this instance, there was an even bigger wrinkle: The CST acquisition hadn't closed – which meant that the subscription receipts issued to finance it still hadn't converted to common shares. (Such securities convert when a transaction crosses the finish line.)

But again, shareholders stepped up to the support it. Both deals have now closed and Parkland's stock is up 146 per cent since Mr. Espey took over as CEO in 2011, while the S&P/TSX Composite Index has climbed 12 per cent over the equivalent period.

However, the growth has come with added debt. Total leverage as a multiple of the company's projected earnings before interest, taxes depreciation and amortization following the recent acquisitions is expected to peak at 3.5 times at the end of 2018. The same metric was only 0.85 times before the buying spree started in 2012.

Parkland is now entering a new phase. "In the early days, we had to buy businesses just to sustain [growth]," Mr. Espey explained. Now the company sees a lot of organic opportunities within its asset base.

Chief among them: Boosting profits from the convenience stores. The retail fuel business is slow growing, and any operator is lucky to eek out 1-per-cent revenue expansion annually. In the c-stores, though, Parkland has plans to roll out its own private label of products, which come with fatter margins, and to launch a loyalty program, among other initiatives.

"If we can convince the consumer to make one more trip inside the store and spend money, that's something like a 10-per-cent sales lift," Mr. Espey said. 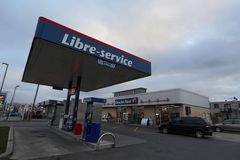