Canadian biotechnology pioneer Bioniche Life Sciences Inc. is about to enter a new era as a pared-down enterprise focusing mainly on a single product.

On Monday, the company's shareholders met in Toronto and approved the sale of its core animal health business, which in the past was its greatest money spinner.

After that deal closes on Tuesday, Belleville, Ont.-based Bioniche will spend most of its efforts getting a drug for humans to market: Urocidin, a treatment for bladder cancer.

Bioniche was once among Canada's most promising biotech innovators but it overextended itself. Then last year, it was embroiled in a nasty proxy battle that resulted in a change in its board, management and direction.

The proxy fight began when Bill Wells, the former chief executive officer of Biovail Inc. – now merged with hugely successful Valeant Pharmaceuticals International Inc. – bought Bioniche shares and began lobbying for the removal of founder and CEO Graeme McRae and some of the directors. He wanted a reorganization to boost the company's sinking share price.

Mr. Wells had initially opposed the sale of Bioniche's animal health division, but in a settlement reached last September he changed his view and agreed to that move. His associate Greg Gubitz took a seat on the board, Mr. McRae stepped down, and new CEO Michael Berendt was installed.

Dr. Berendt says it was clear the company was in too many businesses, and was burning through cash at an unsustainable rate. As well as its human health division and the animal health business, the company also made a vaccine that stops cattle from shedding E. coli – an innovative way of keeping the bacterium out of the food chain.

On a conference call with analysts and investors last month, Dr. Berendt said it is "almost impossible" for a biotech company to run three businesses well, and management has decided to focus on just one.

It found a buyer for the animal health division – Vétoquinol, a France-based maker of veterinary drugs. That's the transaction that shareholders will vote on this Monday. The deal will raise about $61-million, allowing Bioniche to pay off a good chunk of its debt and giving the company enough cash to keep it afloat for a little over a year.

But Dr. Berendt says that's not enough. He is also trying to sell the E. coli vaccine business, called One Health, which has suspended operations and laid off most of its employees. While the vaccine is an innovative and valuable product, he said, Bioniche "has been unable to convince the beef or dairy industries, or the federal or provincial governments, that vaccinating cattle to help reduce the human infection and deaths caused by E. coli is something they should support or pay for."

Even if that business is sold, the company will have to do more to get back on track.

The Urocidin cancer drug still has to secure approval from regulators in Canada and the United States, and more clinical trials will be needed. To make sure the company doesn't run out of money, it will need partners willing to make "milestone" payments along the road.

And to boost its share price, which is languishing below 25 cents a share, Bioniche will have to gain some profile beyond its home base, Dr. Berendt said. The changes will include adopting a new name.

"We basically need to complete the [animal health] transaction, show that we are going to do what we say we're going to do … and quite frankly broadcast this company beyond Canada," he said. 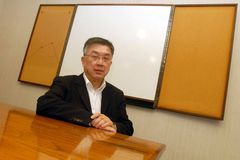