Does BlackBerry Ltd. have its mojo back under new CEO John Chen?

Since plumbing 10-year lows a month ago, the stock has risen by more than 50 per cent – even factoring in a sell-off Monday. Short interest – the number of BlackBerry shares that pessimistic investors have sold with the intent of buying them back at a lower price – has plummeted, to 107.2 million shares on Dec. 31 on the NASDAQ, down from 150.7 million shares a month earlier.

"Insolvency is off the table for now so hedge funds who are short-term in nature and were betting on bankruptcy in six months have scrambled to cover" their short positions by buying back the stock, said Jefferies analyst Peter Misek.

Mr. Chen has moved quickly to stabilize the business since joining in November. The company alleviated much of its short-term financial pressure by successfully appealing to federal and Ontario governments for an early $700-million tax refund and by partnering with Foxconn Technology Group to develop and make its smartphones, offloading much of the financial risks to the Taiwan-based manufacturer. He has quickly restaffed the senior ranks, bringing in colleagues from his days running database software firm Sybase and hiring industry veteran Ron Louks to run the device business.

Although the company reported poor third-quarter results in December, BlackBerry also disclosed it expects an additional $323-million tax refund and $192-million in proceeds from land and equipment sales in the coming year. Combined with an almost untapped $500-million revolving credit facility and proceeds from other potential divestitures, Mr. Misek estimates that BlackBerry has more than $4-billion of "adjusted liquidity."

Neeraj Monga, an analyst with Veritas Investment Research, said "with cash burn expectations clearly articulated by management, Fairfax committing an additional $250-million, and a focused approach to reinvigorating the business in place, for the next little while the bias will be to upside. It is clear that BlackBerry is not going bankrupt."

However, BlackBerry is still a long way from proving its next act will deliver success. At the Consumer Electronics Show in Las Vegas last week, Mr. Chen joked in one interview that he is "abnormal" for taking a job he acknowledged most executives would stay away from. Device sales are expected to continue to decrease along with high-margin revenues from service fees charged to users. The company has pinned much of its hopes on three speculative areas: new technologies from its QNX software division; its BlackBerry Messenger "chat" application, which has more than 80 million users but no revenue and lags leader WhatsApp; and its business of managing fleets of devices for government and corporate users through BlackBerry installed servers. The company admits its updated BlackBerry servers manage BlackBerry 10 phones has brought in "no material revenue" to date and have been largely provided to customers for free trials. It is still unclear whether these customers will update to the new servers, or if there is any interest in the company's recently added ability to manage non-BlackBerry devices which have proliferated in workplaces.

Mr. Monga said the stock will "show signs of breaking to the upside or going down again" this fall. "Until then investors need to see and digest new information coming out."

Chen takes shots at BlackBerry’s rivals as he shares his strategy
December 30, 2013 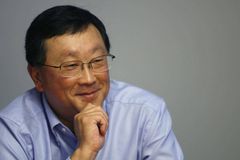 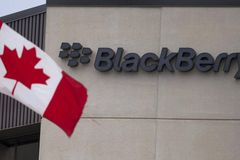