BlackBerry Ltd.'s transformation into a software-first company picked up speed in the third quarter as growth beat analyst projections, resulting in a smaller loss than had been expected.

Just over two years since taking the helm and pledging to turn BlackBerry's fortunes around, chief executive officer John Chen said Friday the company's focus on attracting and retaining corporate customers for its software and mobile device management services is starting to pay off. Software sales in the Waterloo, Ont.-based company's fiscal third quarter were up significantly to $162-million (U.S.), an increase of 183 per cent over last year and 119 per cent over last quarter.

An even better metric is that 70 per cent of those revenues are recurring, chief financial officer James Yersh said during a call with investors.

"In the beginning, everybody is saying that's unbelievable," the CEO said of his public pronouncement in September, 2014, that the company would reach $500-million in software sales for fiscal 2016.

But after a tough second quarter that ended in the summer, Mr. Chen confirmed Friday that he thinks that goal is attainable, and said in the final quarter of the year the company will not include one-time intellectual property deals in its calculations.

"I laid out a stupid milestone; thank goodness I did," he said at a roundtable with journalists at the company's headquarters.

Mr. Chen made no such commitment for 2017, saying only that he expects the company's software business will grow at or above the market. He estimates the enterprise mobility management market is growing at 14 per cent, a level he said was probably attainable without further acquisitions.

Mr. Chen said organic growth in BlackBerry's enterprise mobile management service BES12 and its real-time operating system QNX was up 43 per cent. He confirmed about 20 per cent of the revenue growth came from this year's Good Technology and AtHoc acquisitions, which closed late in the quarter.

"BlackBerry hit a software number that investors have been looking for them to hit for quite some time," Morningstar analyst Brian Colello said in a note.

BlackBerry reported a loss of $89-million, or 17 cents a share, compared with a year ago, when it lost $148-million, or 28 cents a share. Excluding restructuring charges and other one-time items, the net loss was $15-million, or about three cents per share.

Despite a generally positive quarter, with $557-million in total revenue – ahead of an expected $488.8-million – hardware sales continued to slide and were not even mentioned in the company's press release or in Mr. Chen's investor summary.

BlackBerry sold just 700,000 handsets in the quarter, despite the launch of the new premium-priced Android-powered Priv slider phone. Unpacking those details was left to Mr. Yersh to deliver in the technical breakdown.

In the second quarter, BlackBerry handset unit sales slid to a low under Mr. Chen – just 800,000 units – and the total BlackBerry ecosystem fell to 30 million users worldwide. At that time, the average selling price was about $240. In the third quarter, it rose to $315 thanks to sales of the Priv, which sells for about $800 (Canadian) with no contract in Canada.

"There's a tremendous amount of preoccupation with the handsets, and the Priv in particular, but I really don't think that stuff is going to move the needle," Richard Tse, an analyst with Cormark Securities Inc., said. "In fact, they'd be best off from a pure valuation standpoint that they get rid of that business altogether. Pure software businesses don't trade at 0.6 times sales, they trade well north of that."

BlackBerry has not been a serious force in hardware since 2012, when it sold about seven million phones a quarter, which was already a decline from its peak in 2011, when its worst quarter was 11.8 million devices. According to analysts at IDC, the third quarter of 2015 saw newer players such as TCL, ZTE and OPPO grab about 3 per cent of the smartphone market each with sales between 12 million and 17 million units.

The Android market is tough, particularly for high-priced devices, and Mr. Chen did express some regret over Priv's lofty price.

"It's a little high, but it's a very expensive phone to build. It's not like stamping out cupcakes – the price is actually justified," he said. "Under my watch … I have had to build phones that were slightly behind market in terms of power and capacity. We were determined to come out with a phone that when it comes out, it leads. I would like to have a mini Priv, but I don't have one."

Mr. Chen emphasized the first 60 days of Priv's U.S. sales were limited by a carrier exclusivity deal with AT&T, and the phone will not be available in a full 31 countries until February.

He also said Priv's price will probably fall after March as new devices from Samsung and other rivals enter the market, but by then the success or failure of Priv will inform whether the company will continue to make handsets at all.

"My first goal is to get devices to break even. I have been very vocal: If I cannot get there, I will not keep taking my investors through that," said Mr. Chen, who clarified later that even if BlackBerry stopped manufacturing handsets, it would still be in the mobile phone software business.

"We have tonnes of software and IP that absolutely could run not only on Android phones but [also on] Apple phones. We will be in the phone business one way or the other; we might not build the handset itself. All things being equal, I would like to do both."

Mr. Chen also offered a little razzle-dazzle at the end of the call, promising that BlackBerry's QNX business would unveil some self-driving car partnerships at the Consumer Electronics Show in Las Vegas in January. 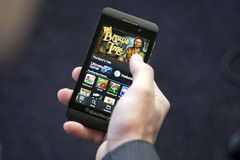 BlackBerry’s new Android smartphone could be its final device
November 2, 2015 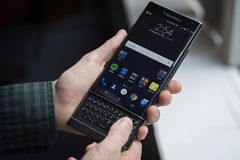