Nearly halfway into his promised two-year turnaround of BlackBerry Ltd., chief executive officer John Chen is asking for patience as market concerns shift from whether the company will survive to where it will find growth.

"When I came into this job everybody thinks that if you don't repair the balance sheet, this company is dead," Mr. Chen told reporters at company headquarters in Waterloo, Ont., on Friday. "All of a sudden, everyone says, 'What happened to the growth?'"

BlackBerry's second quarter results, released Friday, show that the smartphone maker is no longer in imminent financial danger, but its overall business remains in retreat. BlackBerry, which topped out at more than $5-billion (U.S.) in revenue per quarter in 2011, earned $916-million in revenue in its second quarter ended Aug. 30. That was below expectations and down 5.2 per cent from the preceding quarter. It was the ninth time in the last 11 quarters that revenue fell, and may not be the last, Mr. Chen told analysts Friday.

There was some good news for investors, who bid up the stock 4.7 per cent in heavy trading on the Nasdaq. BlackBerry only lost 2 cents a share excluding the fluctuating value of its debentures, compared with expectations of a 16 cent loss. The company's net loss narrowed to $207-million, or 39 cents a share, from $965-million and $1.84 a share a year earlier. BlackBerry reported rare gains in revenues from handsets, and in North America over all. The handset business earned an adjusted gross profit for the first time in five quarters.

The pragmatic Mr. Chen, a turnaround specialist who joined BlackBerry last November, described the results as "solid" and affirmed guidance for positive cash flow by the end of this fiscal year, and for the company to start earning profits the next year.

But medium-term expectations remain muted. "John is doing what he can do, he's making the right moves and controlling what he can control," said BGC Financial analyst Colin Gillis, citing the company's recent restructuring, real-estate selloff and refocusing on its core business and government users. "But you can't force the market to accept your products."

Much of Mr. Chen's recovery plan depends on devices and software not yet in market. The company this week unveiled a jumbo-sized hybrid keyboard/touchscreen Passport smartphone, booking 200,000 orders in two days. Observers believe the phone will appeal to a narrow slice of BlackBerry users with its odd, square-shaped screen and low, three-row keyboard.

The company expects stronger orders from the reboot of its six-year-old Bold keyboard smartphone, rechristened the "Classic," later this fall. Mr. Chen believes there is pent-up demand for the Classic and holds "very high hopes" for its launch, he said. "I've spoken to a lot of people and they want it. A lot of people say, 'I am waiting for this.' "

Mr. Chen said the company will unveil an unidentified new hardware "concept" in March. "We will have new devices [next year], that's for sure," he said. Mr. Chen has said the company must sell 10 million devices a year to make money on hardware, equal to the amount of new iPhones Apple Inc. sold in one recent weekend. Buyers purchased 2.4-million BlackBerrys in the second quarter, down from 2.6 million the preceding quarter.

A bigger concern is the shift in BlackBerry's non-device business. For years, its services business has been a cash cow, deriving high-margin revenues by charging monthly fees to carriers for its data service. After topping out at more than $1-billion in quarterly revenue in 2012, that business has been steadily declining. Service revenues dipped to about $424-million in the second quarter, down 18.3 per cent from the first quarter. The company warned that will continue to decline by 10 per cent to 15 per cent a quarter.

That decline is due in part to the drop in subscribers, and also stems from a decision by past CEO Thorsten Heins to bend to pressure from carriers and lower the fees the company charged for phones running on its new BlackBerry 10 operating system. Those devices do not send or receive e-mail over BlackBerry's custom-built data network like its older smartphones, but over the Internet in the same way Android and Apple products do.

The decline of such highly profitable revenue "poses a distinct threat to the company," Mr. Gillis said in a note. "We see that the company is in a race against time to build up new revenue streams before the traditional services revenue from its older phones rolls off."

Mr. Chen said it would be "denying reality" to think the company can reverse the service fee decline. Instead, Mr. Chen is pinning his hopes on new revenues from other software and services, including $100-million he expects to derive from the company's BlackBerry Messenger instant messaging service – which is available for free on all smartphones – in the fiscal year starting next March.

He also hopes to double the company's software revenue next year, to $500-million. That plan partly rests on reinforcing the company's lead in the device management business by updating software enabling large users to manage all of their employees' smartphones, and winning customers from rivals that have been pecking away at its business.

While Mr. Chen needs an ambitious plan to make up for vanishing revenues, neither he nor company watchers are under any illusions about how difficult that will be. "Upselling is difficult, especially compared to BlackBerry's legacy mandatory services fees," said RBC Dominion Securities analyst Mark Sue in a note. "We see the stock remaining volatile," pending stronger financial results.

One former senior company insider said in an interview: "The question the investors have to ask now is what is BlackBerry's business model today and going forward? Who is going to pay what and when? I am confident Chen is sweating it internally with his team."

Mr. Chen maintained, "I do have a model" for returning the company to growth and profits. "Could I be wrong on the model? Absolutely. Have I been wrong before in my life? Absolutely. Do I get it wrong a lot of times? No, not much."

Editor's Note: BlackBerry's second quarter revenue fell 5.2 from the previous quarter. An incorrect figure appeared in an earlier version of this article. 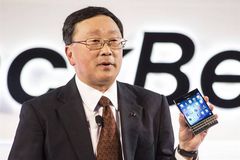 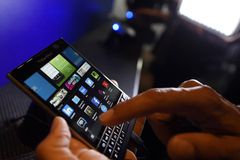 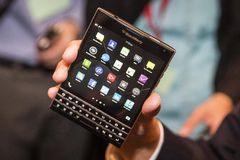 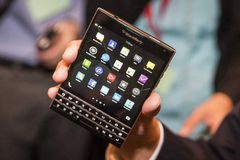 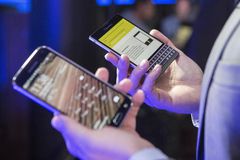