Movie renter Blockbuster Inc. has filed for bankruptcy protection in the United States, a victim of too much debt and the kind of cutthroat competition that hasn't yet dented the operations of its financially stronger Canadian division.

Blockbuster Canada vice-president and general manager Barry Guest said Thursday that the 440 stores across the country won't be affected by the U.S. legal filing.

"We have the assets and our own free cash flow to continue to execute our operating plan," he said in a phone interview. "We're very healthy and continue to grow our market share."

Mr. Guest noted that kind of intense competition in the DVD and games rental market that squeezed the U.S. parent company - from Internet rentals to rapid mail delivery - are not widespread north of the border.

"It is somewhat of a different marketplace in Canada," Mr. Guest explained.

"By-mail and vending [sales]haven't taken the same hold here as they [have] in the U.S. From those fashions there's a little less of a competitive factor in the marketplace."

The bankruptcy restructuring, filed in New York, will wipe out Blockbuster's badly battered stock, which was delisted from the New York Stock Exchange two months ago because it was nearly worthless.

The company will now restructure its business, cut its debt and reduce its size to survive as a smaller movie rental firm down the road.

Once a home entertainment powerhouse in the United States, Blockbuster has lost a large chunk of its movie buff customer base to DVD subscription service Netflix Inc. , which offers both streaming video content over the Internet and DVDs via mail.

In response to the heightened competition, Blockbuster ended late fees and started online services and kiosks of its own.

Blockbuster Canada is a fraction of its U.S. parent company, which has 25,500 employees at 3,000 stores, DVD vending kiosks, by-mail and digital businesses, all of which will continue to operate normally while the company streamlines under Chapter 11. The Canadian division has 5,000 employees at its 440 locations.

However, the launch of Netflix Canada is expected to raise the stakes in the video rental business. The company unveiled its website on Wednesday, offering video-streaming of unlimited movies for $7.99 a month.

The much-hyped debut was hindered by complaints that the Canadian Netflix website offered a limited selection of mostly older movie titles.

Other Canadian companies are also vying for the rental market, including mail-order DVD rental business Zip.ca, which also plans to launch rental kiosks in Metro grocery stores that will offer DVDs for 99 cents a day.

Cable companies are also offering an increasing library of "on demand" movie titles the same day they're released in video stores.

Mr. Guest said Blockbuster Canada plans to expand its business beyond the traditional retail stores by offering a "multi-channel" strategy that he refused to detail any further.

"It only makes sense as a market leader in Canada to be able to, in the future, expand our offering to multi-channel. It would be a natural transition for Blockbuster," he said.

"The recapitalization of our parent in the U.S. will only help us get to bigger strategies in the future."

In the United States, Blockbuster already has closed more than 1,000 stores over the past two years because so many of them weren't making money.

Mr. Guest said that about 23 locations will close in Canada by the end of this year, though there is "no plan for any mass store closing."

Blockbuster Inc. plans to reduce debt from nearly $1-billion (U.S.) to about $100-million or less by swapping debt for equity in a reorganized company with bondholders that hold about 80.1 per cent of senior notes.

It has received commitments for $125-million in "debtor-in-possession" or emergency financing from senior noteholders to repay customers, suppliers and employees during the reorganization. 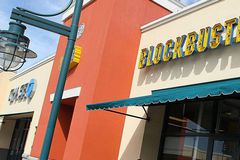