A storm of criticism is building against the compensation of executives at Bombardier Inc. as a view emerges that last year's pay for senior management is excessive, given that taxpayers helped save the company from possible ruin.

Filings mailed to shareholders ahead of Bombardier's annual meeting May 11 show the Canadian plane maker awarded its top five executives and executive chairman Pierre Beaudoin $32.6-million (U.S.) in 2016, a nearly 50-per-cent increase from the year before. It is the most Bombardier has collectively paid senior management in at least three years.

"If I were in the company's shoes, I would question the message I'm sending to the population," Quebec's Economy Minister Dominique Anglade said in the legislature Thursday. Workers and Quebeckers more broadly are shocked by the pay, she said. "And I can understand that."

The pay hikes came during a year in which Bombardier gained ground in a turnaround effort but also laid off thousands of workers, finalized a $1-billion investment deal from Quebec and pushed for federal aid that finally came with a $372.5-million (Canadian) pledge in February. A previous $1.5-billion (U.S.) investment from the Caisse de dépôt et placement du Québec in its train business allowed the plane maker to further shore up its cash position.

After touring a Magna auto-parts facility in Brampton, Ont., Prime Minister Justin Trudeau was asked several times Thursday how his government could justify the loan package for Bombardier.

"We respect the free market and the choices that companies will make," Mr. Trudeau said. "But we also have a responsibility to ensure that the investments we make with taxpayers' dollars are leading to good jobs and growth."

Quebec Premier Philippe Couillard said the matter of executive compensation is ultimately for Bombardier and its shareholders to decide. But he questioned, from an employee standpoint, whether the timing behind such raises and the message it sends was "well-chosen."

"There was clearly a lack of judgment here" by Bombardier directors, said Michel Nadeau, executive director of Montreal's Institute for Governance of Private and Public Organizations. "[Last year] was not a good year. If the share price rebounded, it's because $3-billion of public money was invested in the company."

Bombardier should have frozen the pay of its senior executives at 2015 levels in recognition of the aid received and the sacrifices made by employees, Mr. Nadeau said. He said both the Caisse and the Quebec government should push for such a freeze.

Caisse spokesman Maxime Chagnon declined to say Thursday whether the pension fund supports the remuneration being awarded to Bombardier senior executives. "As a shareholder, our basic principle is the importance of a strong link between performance and compensation," he said, adding the Caisse would look at Bombardier's filings very carefully and reveal its position in May after the meeting.

"This defies understanding," said Daniel Thouin, president of Montreal-based shareholder rights group Médac. "If directors had the least bit of common sense, they would have waited for the company to post a profit and for the brouhaha surrounding the company's near bankruptcy to pass. … We're more than upset."

Bombardier tallied a loss of $981-million last year, its third straight annual loss, as it pushed through a period of intensive cash usage to get its flagship C Series airliner to market. It is overhauling operations extensively toward a goal of generating an 8-per-cent EBIT margin on $25-billion in revenue by 2020.

Bombardier chief executive officer Alain Bellemare, hired in 2015 to put the company back on track, received $9.5-million in total compensation for 2016, up from $6.4-million in 2015. His pay includes $5.2-million in stock and option-based awards and a salary of $1-million. He also received a cash bonus of $2.36-million, almost double that of the year before.

Mr. Beaudoin, who runs the company as executive chairman in tandem with Mr. Bellemare, received $5.25-million, up from $3.85-million the year before.

In a note to shareholders contained in the filing, Jean Monty, chair of Bombardier's human resources and compensation committee, said the plane maker's leadership team delivered "high-quality results" in 2016.

"The company achieved earnings at the high end of its guidance, exceeded its target margins and launched two restructurings leading to significant cost savings," Mr. Monty wrote. Year-over-year cash performance improved by $775-million while Bombardier also successfully lowered the risk weighing on its business by securing the money needed to fund its turnaround plan, according to Mr. Monty.

Simon Letendre, a Bombardier spokesman, said compensation at the company is based on general market practices and is at the midpoint of global companies of the same size. He also noted that a significant portion of management's compensation is at risk. For example, 28 per cent of Mr. Bellemare's pay is made up of stock options whose value depends on the appreciation of Bombardier stock.

While that's true, Bombardier is also paying out bonuses for senior leadership in cash, notes Paul Gryglewicz, senior partner with Global Governance Advisors, an independent compensation advisory firm. That's strange for a company whose main problems were tied to liquidity challenges, he said.

"They could have preserved more cash" and considered an equity grant for executives instead that would be tied to the success of derisking the business, he said. That would have further aligned their interests with those of shareholders, he said. 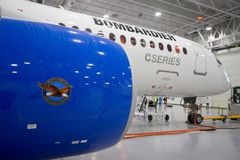