Bombardier Inc. is pressing the Canadian government for $1-billion (U.S.) in aid as the aircraft maker works to further bolster prospects for its new C Series plane after securing deals with Quebec and the province's big pension fund manager, according to a well-placed source.

The company is aiming for backing from the federal government for its new C Series airliner specifically, as a way to show prospective buyers the company and its flagship product are here to stay.

It has asked officials that its request be handled with some urgency.

Senior leaders at Bombardier believe such aid would be immensely powerful, sources say. It would send a signal to the market that Canada will stand behind the company, which carries weight beyond the support it has already won from Quebec. And it would reaffirm that the country is committed to playing in the aerospace big league, with the risk and reward that entails.

"Anything that would keep adding to the benefit of the C Series and give it more traction in the marketplace would be a good thing," Mr. Bellemare told investors in New York on Nov. 24 when asked about federal aid. "That's the reason why we keep pursuing it."

Bombardier has acknowledged it has renewed discussions with federal officials about additional support for the 100- to 160-seat airliner in the wake of the recent federal election. But it has never said how much it was looking for in the talks and continues to refuse to provide any details on the matter.

The amount being sought is in fact $1-billion, said a person familiar with the company's plans. The person declined to say whether the manufacturer was seeking a direct investment similar to that received from Quebec or another type of assistance. Bombardier spokeswoman Isabelle Rondeau declined to comment.

A deal with Ottawa would further strengthen Bombardier's balance sheet and, with it, its ability to push through the critical period of initial production, during which it will sustain losses. It will also give the company more power to get aggressive on pricing.

The single-aisle airliner is going up against the smallest jets made by Airbus and Boeing, which have pushed back hard against Bombardier's new plane with rebates supported by higher assembly line volumes. Both rivals have benefited from significant support from their home governments in Europe and the United States.

Although state support is the norm in aerospace globally, critics say the fact Bombardier is seeking yet another large investment agreement also highlights the depth of trouble it has had with the C Series as well as its failure to improve its financial situation under previous management. Some believe Ottawa should insist on corporate governance changes at Bombardier beyond those already made.

The C Series, the world's first all-new narrow-body aircraft in three decades, is two years late and significantly over budget. Bombardier took a $3.2-billion impairment charge on the aircraft program in its latest quarter and has said it will need $2-billion to bring the plane to cash flow break even in 2020-21. The company has total long-term debt of $9-billion.

"They're completely undercapitalized to take on what they have taken on," said Rolland Vincent, a former Bombardier executive who now runs his own consulting firm in Plano, Tex. "C Series sales will require discounting for many years to come, especially to win large fleet orders."

Since Mr. Bellemare started with Bombardier this year, the company has explored ways to buttress its C Series program and its long-term chances, including approaching Airbus for a possible investment. Those talks ended when their existence was leaked to the media but the company was able to strike two separate agreements to bolster its liquidity.

First it clinched a pact with the government of Quebec, which will invest $1-billion for a 49.5-per-cent stake in the C Series program. Quebec's Economy Minister has said he planned to ask the Trudeau government to match the province's investment. Bombardier then did a deal with pension-fund giant Caisse de dépôt et placement du Québec, which agreed to pay $1.5-billion for a 30-per-cent stake in Bombardier's train business.

Bombardier has already received three separate repayable loans from governments to help develop the C Series. The Canadian government, under former prime minister Stephen Harper, lent the company $350-million. The British government lent about $270-million, while Quebec contributed $117-million. Financing to help Bombardier customers buy its aircraft is on top of that.

Quebec exports expected to surge this year and next, EDC says
November 26, 2015 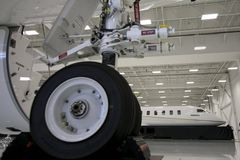