The Canadian government is pushing Bombardier Inc.'s founding family to loosen control of the aerospace company and issue $1-billion in new stock, triggering a standstill in talks over a federal aid package, according to people familiar with the negotiations.

Prime Minister Justin Trudeau's proposal to Bombardier would see his government and the province of Quebec each invest $1-billion in the company, along with a share sale that would raise another $1-billion to bolster the firm's balance sheet. Along with the $3-billion plan, Canada wants the company to do away with the dual-class share structure that allows the Bombardier and Beaudoin families to maintain control with only a minority stake.

Bombardier is balking at these demands, according to people familiar with the talks, speaking on condition of anonymity because the negotiations are private. Federal officials now believe it's up to Bombardier to make the next move.

The impasse jeopardizes a federal injection for Montreal-based Bombardier, which has already received a $1-billion commitment from Quebec for its C Series jet program. Quebec wants the Trudeau government to match its backing for the program, while the federal government prefers that it and Quebec make a direct investment in the company, the people said.

"It would be appropriate for the federal government, if it decides to participate, to focus its action on the aircraft, not on Bombardier Inc.," Quebec Finance Minister Carlos Leitao said Friday in an interview in New York.

The two governments remain at odds over how to proceed as Bombardier's founding family digs in its heels, emboldened by a recent C Series order by Delta Air Lines Inc. that buys them time to resist demands for corporate governance changes. Delta last month agreed to buy at least 75 of the new planes, valued at $5.6-billion based on list prices, in a vote of confidence for a program that had been delayed, over budget and failing to win orders.

A federal investment is "perhaps less urgent but still very important" for Bombardier, Leitao said, adding it would send a signal that "the federal government, like the Quebec government, believes in this airplane."

"It's not our intention to change anything in this regard," Bombardier executive chairman Pierre Beaudoin said April 29, referring to the dual-class share structure. While some talks continue over an aid package, the broad group of negotiators hasn't met in four weeks, the officials said.

Bombardier's shares have soared this year, bolstered by the Delta order and optimism over an aid package. A $2-billion cash injection from the two levels of government would give Bombardier some breathing room and strengthen the credibility of the C Series, BMO Capital Markets analyst Fadi Chamoun wrote in a May 12 research note.

Trudeau's point-man on the file, Navdeep Bains, insisted Thursday that negotiations aren't stalled and the government remains committed to Bombardier. Bains is minister of innovation, science and economic development.

"We're engaged with the company," Bains said in Ottawa. "As I've said from day one, we want to be part of a solution. We believe the company is very important to the aerospace sector, to the supplier base, and we're working with them on finding a solution that really sets them up for success not only in the short term, but in the long term as well."

Finance Minister Bill Morneau, speaking Thursday in Montreal, acknowledged there was a "timeline" to the negotiations but didn't say if there was a firm deadline. "It's not very helpful to negotiate in public. There will be more to discuss on this subject but I'm not in a position to do that now," Morneau said.

Talks with the government are continuing, Sylvie Gauthier, a Bombardier spokeswoman, said in an e-mail. She declined to elaborate.

The company is said to fear a foreign takeover with a change to the share structure, a threat considered immaterial by the federal government, which could block any move under Canada's investment laws, according to one official.

The Quebec government is now prepared to finalize its C Series investment – initially envisioned as a three-way deal with the federal government and the company – without federal help, one person familiar with the negotiations said. Bombardier has said it expects Quebec to complete its investment by the end of June.

"We need an additional partner," Transport Minister Jacques Daoust said in February, referring to the federal government, adding: "If I don't get this partner, I will have to see with Bombardier how I can close the deal differently."

Daoust has also said Quebec may consider a further Bombardier investment if the federal government declines an aid package.

With Bombardier and the federal government at odds, political pressure is mounting in Quebec, where Trudeau has a sizable contingent of 40 lawmakers. Some of those lawmakers consider Bombardier too big to fail and sense political pressure, the officials said. However, the Delta purchase, Bombardier's existing cash reserves and any Quebec aid push a cash crunch down the road and leave no imminent risk of collapse, the officials said. Trudeau's government still believes the company will need a cash injection over the next two years, one official said.

Speaking at the annual shareholder meeting last month, Beaudoin defended the dual-class structure as a pillar of the company.

"The Bombardier family has always sought to ensure the success of the company," he said. "It was there in good times and in more difficult times. Our multiple-voting shares allow us to invest for the long term. They also allow us to protect against the dismantling of the company." 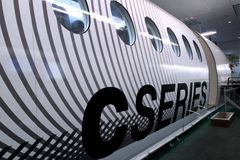