A shortage of new aircraft orders for Bombardier Inc. could force the Canadian plane maker to cut production further as its stock cracked below the symbolic $1 threshold for the first time in almost a quarter-century.

Bombardier is poised to report its worst year for aircraft orders since 2009 when it announces fourth-quarter and full-year results Feb.18, according to analysts at Macquarie Capital Markets Canada Ltd. The plane maker last week lost a key United Continental Holdings Inc. order for 40 narrow-body airliners to rival Boeing Co., although it is still in talks with United on a separate sales deal that could be even larger.

Based on data through the first nine months of 2015 and information disclosed during the fourth quarter, Bombardier is on track to report new bookings for 99 planes for fiscal 2015, Macquarie said. That's less than half the 282 tallied the year before and implies a 34-per-cent year-over-year drop in Bombardier's aerospace backlog in a best-case scenario, according to Macquarie.

"That's a red alert, in my view," Macquarie analyst Konark Gupta said Tuesday, because Bombardier's estimated order book of 324 planes at the end of 2015 equates to about 14 to 15 months of assembly work. "It's not enough. Historically speaking, they have had more than two or three years of backlog. And now we're talking about less than two years."

Macquarie's analysis does not include Bombardier's previously announced cancellation of orders for its Learjet 85 plane, owing to the program being stopped, which would reduce the overall order tally. And it doesn't take into account any new orders for business jets that Bombardier might have booked during the quarter but not yet made public, which would boost it. It also assumes all new orders were for so-called in-production aircraft (all the models Bombardier currently makes, not including the C Series and Global 7000/8000 planes under development).

Bombardier class B shares sank below $1 in Toronto trading Wednesday, less than half the price of its $2.21-a-share equity offering a year ago. The drop raises the possibility the company will be ejected from Canada's main S&P/TSX stock index. To be eligible for inclusion in the index, which is reviewed quarterly, a security has to have a minimum volume-weighted average price of $1 over the past three months and must represent a minimum weight of 0.05 per cent of the index.

"Any upward movement in Bombardier's share price is likely to come from news flow of aircraft orders, which have been muted for the last two years," Veritas Investment Research analyst Kevin Dusseldorp wrote in a recent note. He rates the stock "sell" with a price of $1.20.

Bombardier currently builds five different families of aircraft, namely, the Q400 turboprop, CRJ regional jets, and Learjet, Challenger and Global business jets. It is slowly spooling up manufacturing of its largest-ever plane, the 100-to-160-seat C Series, after a two-year delay, with plans to build and deliver between 15 and 20 of them this year. The company is also working on the new Global 7000/8000 business jets slated for initial delivery in the second half of 2018.

Bombardier's aircraft backlog for in-production models has been declining steadily since 2013, Macquarie research shows. The 243 firm orders Bombardier has for the C Series will offset weakness for other planes in the commercial aircraft unit. But the trendline for business jets, the company's most profitable products, is more alarming.

A weaker backlog for business jets, combined with slower sales and a delay for the new Global models could put more pressure on production rates this year and next, Macquarie said. Bombardier is already ratcheting down output for the Global 5000/6000 models for 2016, announcing last May it would cut 1,750 jobs in that unit to bring supply more in line with global demand. More cuts could be coming if demand continues to slow.

Several of Bombardier's largest markets for luxury jets have been hit hard, including oil-revenue-dependent Russia. Falling oil prices have weakened the country's economy and triggered a depreciation in its currency. That has left Russia's monied class, which has a preference for Bombardier's large-cabin planes with longer range, without the spending power they once enjoyed.

Boeing Co. said on Wednesday it would deliver fewer planes in 2016 and forecast earnings below expectations, sending shares tumbling as much as 10 per cent to a more than two-year intraday low.

The 737 production cut surprised analysts, who had expected Boeing to maintain rates during the transition rather than potentially cede delivery market share to rival Airbus SA.

Boeing said it plans to increase production of 737s to 57 a month in 2019, a new target roughly in line with the 60-per-month target Airbus announced in October for its competing A320 jetliner.

Boeing also said it would cut 777 production to seven a month in 2017, reflecting slower sales and the need to transition to the 777X model, with new engines, new composite wings and technologies from the 787 model, due out by 2020. 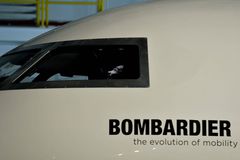