Bombardier Aerospace workers voted overwhelmingly in favour of a new reciprocity agreement on Sunday, as the manufacturer and Airbus continue to work towards finalizing their partnership to produce C Series aircraft.

The agreement would ensure that workers who switch from Bombardier to the future partnership, and vice-versa, will not lose their pensions and will keep most of their seniority benefits, including salary and vacation time.

It would also ensure that workers who are laid off from one company will be given priority for future jobs at both.

Workers voted 92.3 per cent in favour of the letter of agreement during a meeting in Montreal on Sunday morning.

Union spokesman Dave Chartrand said the agreement will create bridges between the workers' union, Bombardier and the new limited partnership once the enterprise is split into separate entities.

"When a business sells or creates a partnership, what usually happen is the workers under the group that is sold stay in that group, and there's no bridge between the two companies," he said following the vote.

"What was important to us when the announcement was made ... was to sit down with the company and the partnership and make sure that's there's labour mobility, so workers can go work for one company or the other depending on need."

Chartrand said the letter of agreement will be included in the collective bargaining agreements of both companies, as well as in future agreements once they are renegotiatied.

In a statement, Bombardier said it was pleased with the outcome of the vote, calling it "another important step towards closing the announced partnership with Airbus for the C Series aircraft."

"This is good news for our unionized employees, who will keep their benefits even if they move from Bombardier to the C Series LP or vice versa," the company said.

"It is also a positive outcome for Bombardier and our partner Airbus, as it will maintain our access to a large pool of qualified workers in the Montreal region and give us the flexibility to address operational needs within both companies."

Although they are spread over three sites, the aerospace workers are covered by the same employment contract, which is due to expire in 2019.

However, under the deal with Airbus, the limited partnership created to build C Series will now become responsible for approximately 2,000 employees at the Mirabel plant.

Several union members in attendance on Sunday morning said they were pleased with the agreement, saying it assuaged some of their feelings of uncertainty surrounding the deal.

Michel Marcotte, who donned a C Series baseball cap, said he was glad to hear there that employees who switch between Bombardier and the new Airbus-led partnership won't lose seniority or benefits.

"For the employees we'll still be like one entity, within limits. At least it keeps that," said the C Series worker.

For Bombardier worker Othmane Benzekri, the preferential hiring measures offer some reassurance to workers in an industry that is prone to cycles of layoffs and hires.

"Even if it's split into two different companies, it gives us the freedom to travel from one side to another," he said.

Under the terms of the deal announced last fall, Airbus will hold 50.1 per cent of the new partnership.

Bombardier's share will increase to 31 per cent while that of the Quebec government – which injected US $1-billion to obtain 49.5 per cent in 2015 – should decline to 19 per cent. 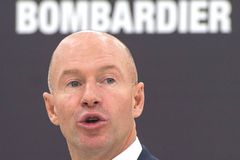