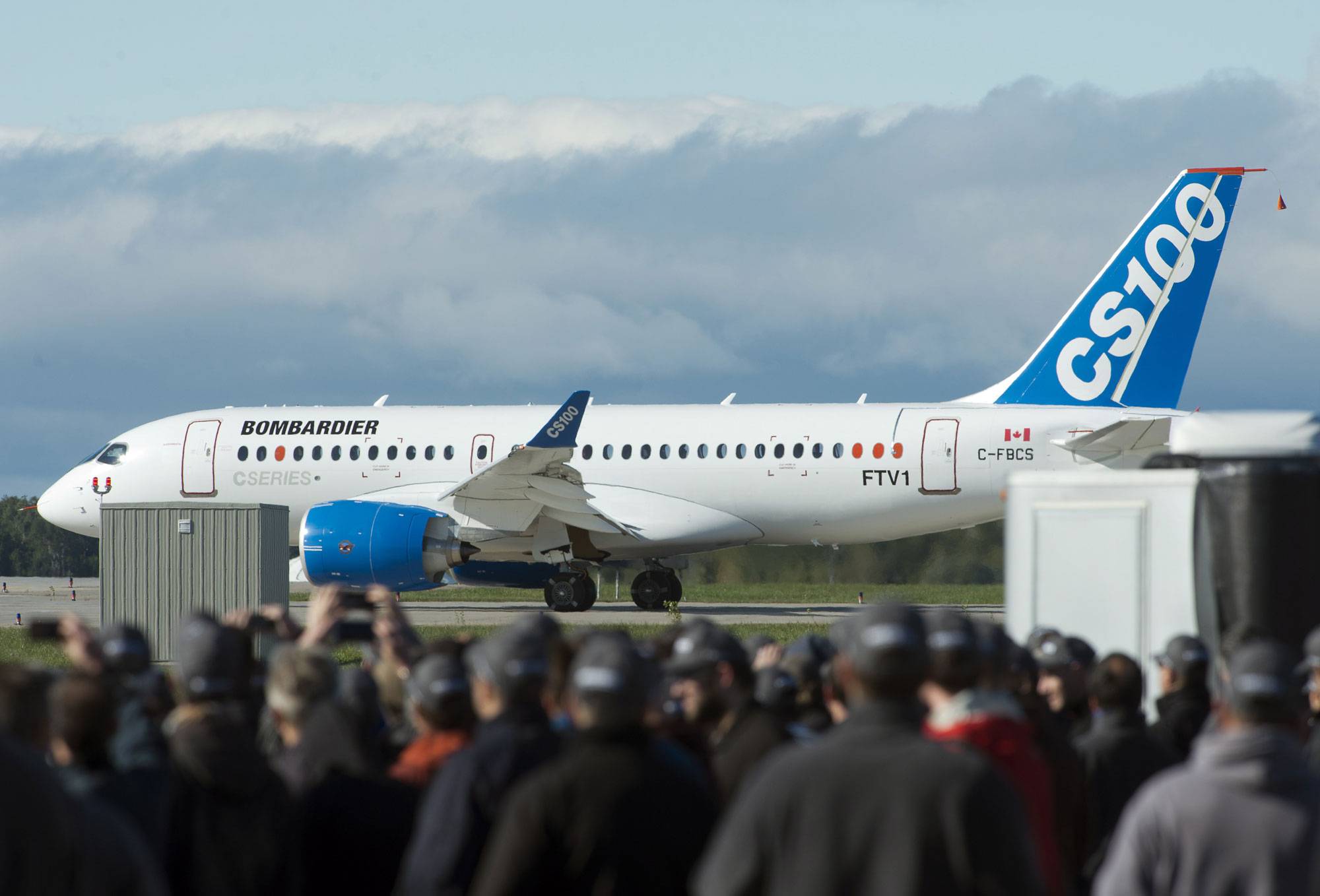 The C Series is an all-new plane that has been under development by Bombardier in various forms for more than a decade. Its composite wings and a fuselage made of an aluminum lithium alloy make it lighter than existing jets in the 100- to 150-seat segment of the single-aisle market. Pratt & Whitney has developed new engines that are more fuel-efficient than existing ones. They’re also much quieter, which should enable planes to be certified at airports where noise concerns are key, such as London City airport. The lighter weight and more efficient engine contribute to fuel consumption that is 20-per-cent lower than existing planes in the segment, Bombardier says. The transportation giant has so far sold two versions: the smaller CS100, with seating for between 100 and 119 passengers, and the CS300, which seats up to 149. A larger version of the CS300 that seats 160 is also being offered, but so far there have been no buyers. 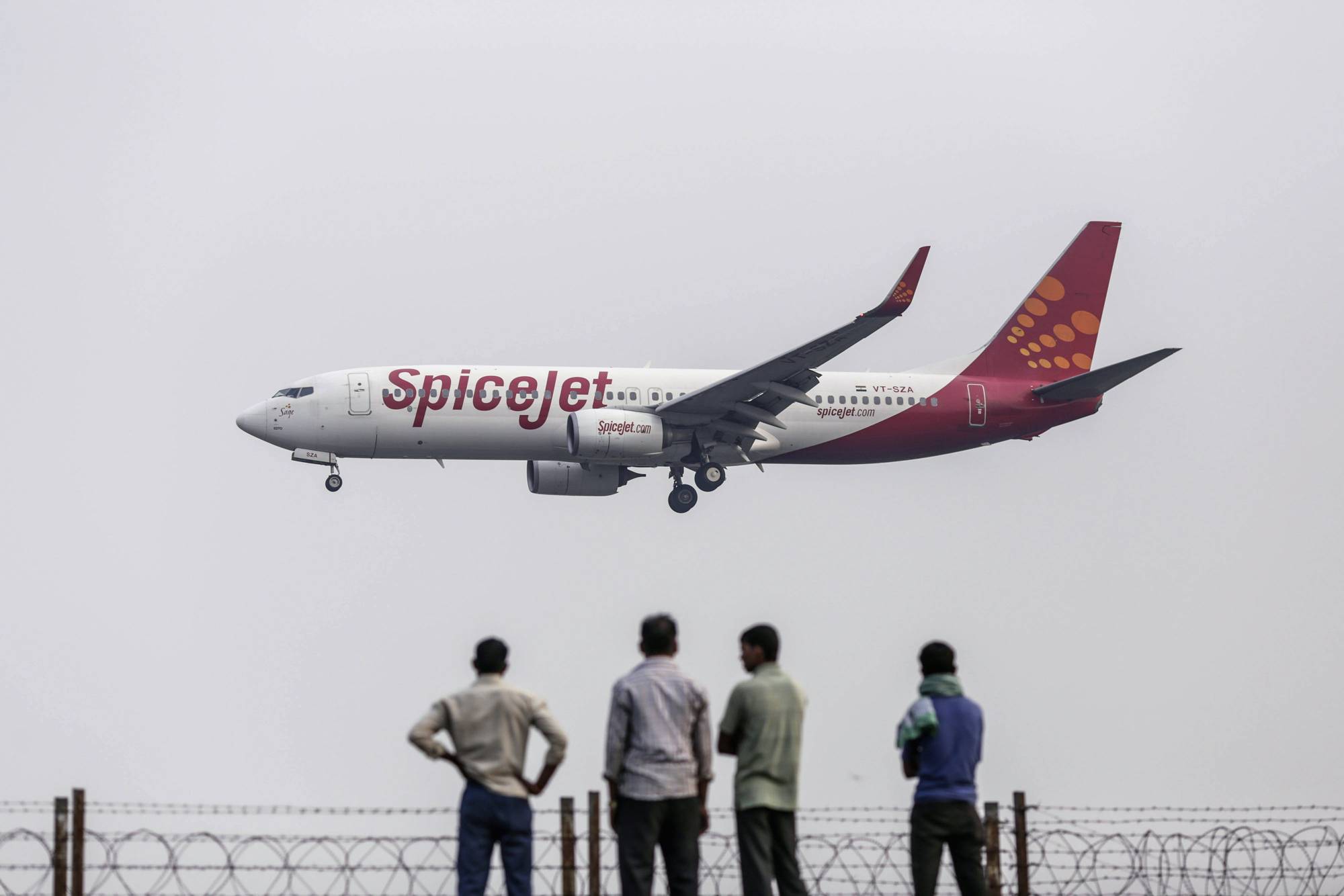 The C Series is Bombardier’s bid to move up from turboprops and regional jets into the large commercial jet market dominated by Airbus Group SE of the Netherlands and Chicago-based Boeing Co. The biggest and most lucrative market among commercial jets is in single-aisle airplanes, the workhorse planes that carry 220 or fewer passengers, mainly on trips within a single continent. Within that market, Bombardier is targeting the smaller narrow bodies, those that carry between 100 and 150 people. Airbus sells its A319 into this market, while Boeing offers different versions of its 737, mainly the 737-700. Bombardier’s 20-year sales forecast, released at the beginning of 2015, says airlines will buy 7,000 100- to 150-seat aircraft between now and 2034, generating $460-billion in revenue for airplane manufacturers. 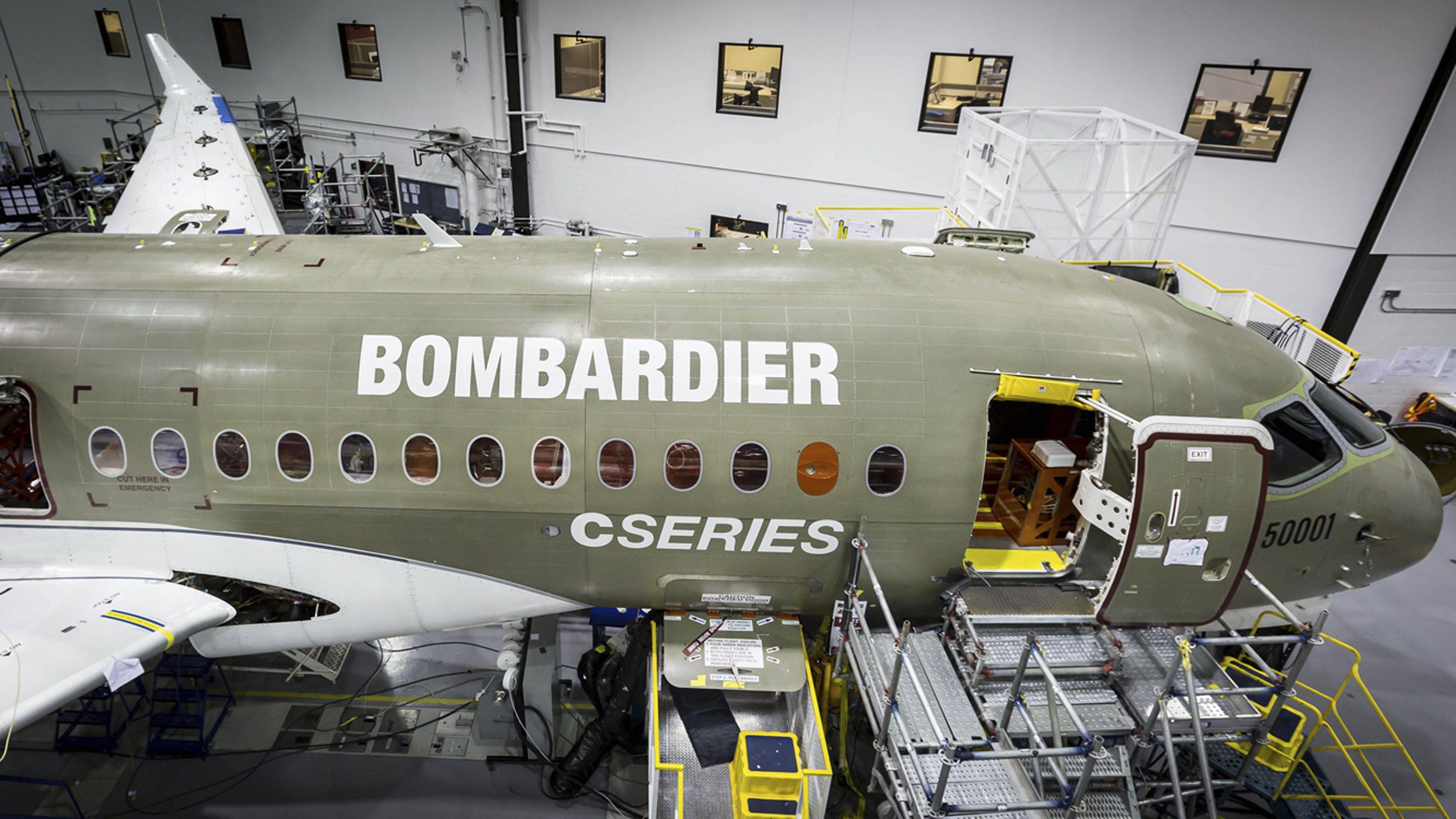 A Bombardier C Series jet is seen under construction is seen in this handout photo taken in Mirabel, Que., in June of 2013. (Handout via Reuters)

The original cost of developing the C Series was pegged at $3.4-billion (U.S.), which included contributions from the Quebec and British governments. The Canadian government has since contributed a $350-million (Canadian) loan to Bombardier for the project, which is now more than $2-billion over budget. The composite wings are manufactured at a plant in Belfast, Northern Ireland, a stone’s throw from the shipyard where the Titanic was built more than a century ago. The fuselage for the planes will be manufactured in China. They will be mated at a plant in Mirabel, Que. Although production of planes for airlines will gear up next year, the program is now not expected to generate profit for Bombardier until 2020. 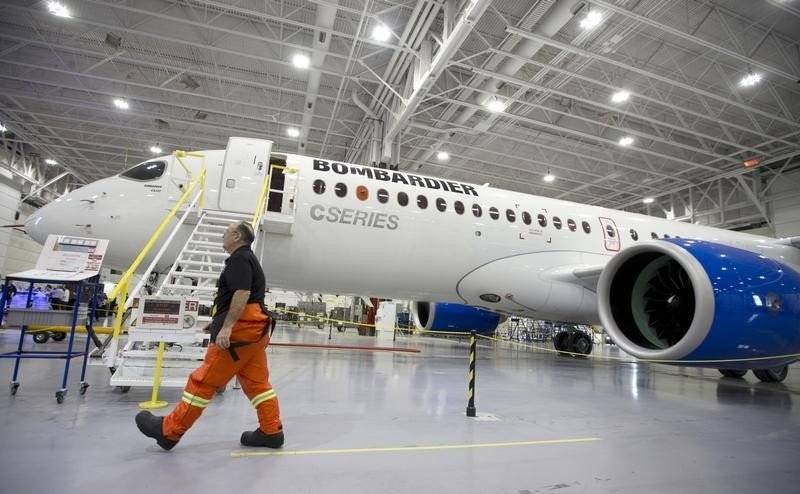 A Bombardier worker walks past the CS300 aircraft in the hangar in Mirabel, Que, on Feb. 27, 2015. (Christinne Muschi/Reuters)

The C Series has been plagued by delays that have pushed its entry into service – or the date when airlines use it to carry paying passengers – two years beyond its originally scheduled date and into next year. The biggest delay was caused when an engine failed in May, 2014, which caused flight testing to be put on hold for several months. Since then, the pace of flight testing has picked up dramatically and is 97-per-cent complete, with the plane on its way to being certified for passenger-carrying flights next year. But the company says it will need to spend another $2-billion this year and in 2016 to deliver the plane to market. 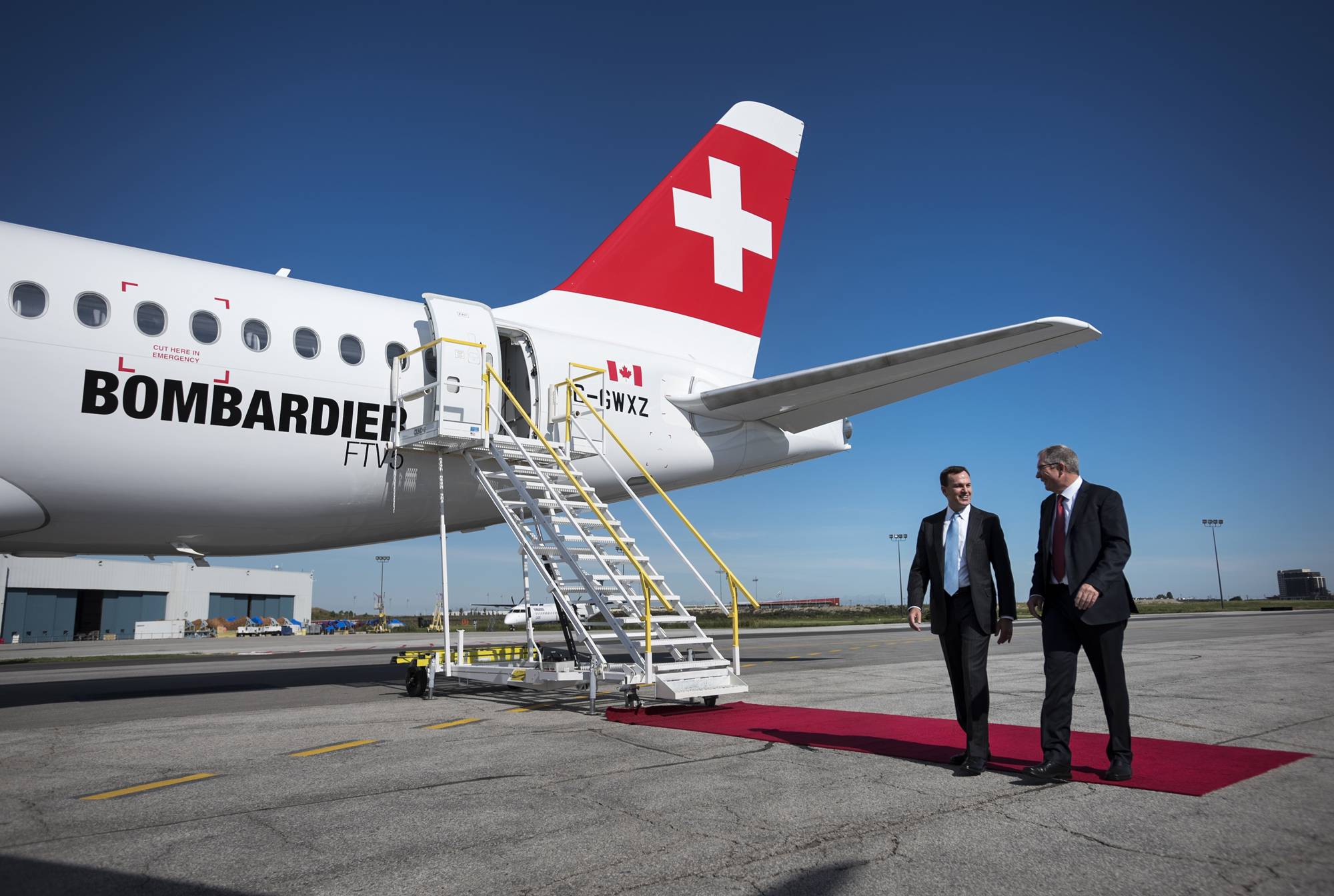 Fred Cromer, left, president of Bombardier Commercial Aircraft, and Rob Dewar, vice-president of the C Series program, walk past the new CS100 aircraft during an event at the Bombardier site in Toronto on Sept. 10, 2015. (Darren Calabrese for The Globe and Mail)

The next big step for Bombardier is getting the first CS100 delivered to launch customer Swiss International Air Lines Ltd. by early next year. The plane maker will produce between 12 and 20 of the aircraft annually, while also trying to build the order book, which stands at 243 firm orders, plus another few hundred options and letters of intent. Not a single order has been signed in more than a year, however, which has cast doubt in the minds of airlines, industry analysts and other observers that the plane actually has a future. The program has been beset by bad luck, as well as bad management. One of its key selling points was fuel efficiency, which has been effectively negated by the dramatic plunge in the price of oil. Had the program been on time, instead of two years late, the plane would have been in the air in 2013, when oil prices were high and fuel economy was top of mind for airlines.