Bombardier Inc. executives are looking to the sky as they await a picture-perfect blue ceiling and winds of less than 10 knots an hour to clear the way for the takeoff of the new C Series.

Already nine months behind its original schedule, the first flight of Bombardier's new commercial aircraft could occur any day now that the aircraft manufacturer ran some high-speed taxi tests on a Mirabel runway Friday. However, the extended weather forecast for the Montreal area, which calls for storms and rain as of Tuesday, makes the day tricky to predict.

This first flight is an important milestone for the C Series, a single-aisle airliner that was built from scratch at a cost of $3.4-billion (U.S.) and which is powered by a new Pratt & Whitney engine. Bombardier hopes the sight of the white-and-blue plane in the sky will convince airlines to purchase the C Series since the plane has only garnered 177 firm orders since it was officially launched five years ago.

Watching the C Series fly should not be a nail-biting experience, though.

"The aircraft is so thoroughly tested on the ground, through rigs and simulators, that nobody will ever conduct a first flight with any significant risk or concern," said William (Muz) Colquhoun, senior engineering test pilot on the C Series' second prototype plane – there are five in total.

Mr. Colquhoun will get to fly the C Series shortly after chief test pilot Chuck Ellis has the honour of taking it off the ground for the first time. Mr. Colquhoun joined Bombardier a year ago but has 15 years of experience as a test pilot, most recently with Pilatus Aircraft Ltd. The 52-year-old pilot who spent 22 years in the British Royal Air Force knows no butterflies, but does feel a "certain amount of nervousness" as his C Series flight nears.

"We must expect the unexpected," he said in an interview.

All the test pilots have been working on the C Series full time.

"We have been involved in the development of the aircraft from Day 1," he says. A test pilot, he said, serves as a bridge between the commercial pilots and the engineers that design and build a plane. "We live in both camps."

As the first flight is the culmination of months of work, Mr. Colquhoun is anxiously awaiting his turn on the runway. "This is a very exciting time," he said.

How long, how high and how fast the C Series aircraft will fly after its first takeoff is still shrouded in mystery, however. The flight plan might change because of dozens of factors, weather being only one. "That can only be answered by the crew on that day," he said.

"We don't want to be too ambitious on a first flight," the Bombardier pilot added. "We would like to get airborne and to slowly expand the speed envelope. Once we are happy that we have a reasonable amount of data, we will be suitably cautious. There is no point in hanging out there on Day 1."

Bombardier engineers are waiting to analyze the data collected on that flight and the following ones with the use of the flight test instrumentation systems, a series of computers that occupy a large section of the gutted prototype airplanes.

There is also a ballast system: large water tanks that are spread out across the plane and that can be move around so that Bombardier can simulate in flight different weight combinations. All those testing systems are painted in bright orange to distinguish them from the plane's regular parts, as is the tradition for plane prototypes.

The results of those tests will substantiate Bombardier's claims that the C Series will offer alluring savings to airlines with a 20-per-cent reduction in fuel burn and a 15-per-cent cut in overall operating costs.

Mr. Colquhoun and his colleagues will test the C Series planes for a year after the maiden flight. Bombardier still hasn't updated the C Series' entry of service date, but a number of analysts now expect this will occur in early 2015. 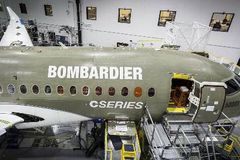 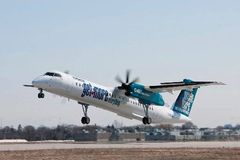 Opinion
Why Bombardier is sacrificing its Flexjet unit
September 6, 2013
Air Canada has an eye on Bombardier C Series buy
August 20, 2013 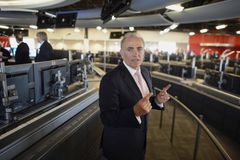