WestJet Airlines Ltd. is facing a tough decision for its new regional fleet – fast planes made in Canada, or fuel-sipping foreign models.

The Calgary-based carrier is expected to pay as much as $1-billion on 40 new turboprop aircraft for planned short-haul flights. Bombardier Inc.'s Q400 has long been seen as the leading contender. But now a European rival is jockeying to win the order, claiming its plane is superior.

The Q400 burns up to 47-per-cent more jet fuel on shorter routes than the French-Italian ATR 72, the European manufacturer argues, highlighting that the foreign-built turboprop will provide substantial reductions on soaring fuel bills amid stubbornly high oil prices.

Montreal-based Bombardier's emphasis on its Canadian content, including parts from the West and Quebec, is designed to sway WestJet. By contrast, European aerospace giant EADS co-owns the ATR joint venture with Italy's Alenia Aermacchi.

WestJet initially favoured the Q400, assembled at Bombardier's Downsview plant in Toronto, but an aggressive campaign by the ATR 72 team has tightened the race to supply WestJet with the 40 planes at a lower purchase price, industry insiders say.

The airline asserts that it needs the regional arm to improve profit and increase the number of destinations served. In January, WestJet confirmed its plans to launch the new division in 2013 to battle Air Canada, hoping to lure passengers in smaller markets and also increase flight frequencies on some existing routes.

WestJet knows that the Q400 can attain faster speeds and has a longer range, but the company has to weigh that against the fuel-efficient mileage achieved by the foreign plane, said one aviation consultant, who noted that the ATR 72 could potentially add 13 extra minutes to a trip from Toronto to Montreal that takes 70 minutes on the Q400.

Several industry experts say the Q400 still has the edge, but Raymond James Ltd. analyst Ben Cherniavsky said in an interview Wednesday that the ATR 72 can't be ruled out.

"My analysis tells me that the ATR 72 makes more sense because of its fuel economy," said Mr. Cherniavsky, who is preparing a detailed report on WestJet's plans for its regional airline.

Bombardier spokeswoman Marianella de la Barrera said the Q400 seats more passengers than the competing plane, so that has to be factored into any analysis. WestJet is considering configurations that would place 68 seats in the ATR 72 and perhaps 76 seats in the Q400.

Ms. de la Barrera said it's misleading to focus on data on fuel usage by the ATR 72 (600 series), asserting that Bombardier's plane has all-around capability on diverse routes.

"We're very proud that the Q400 is a Canadian turboprop. We have suppliers in Western Canada and Quebec," she said.

Addison Schonland, a partner at aerospace consulting firm AirInsight, said the Q400 has 4.6 cents in fuel costs per available seat mile, compared with the ATR 72's 6.3 cents. He also pointed out that the Q400's maximum cruising speed of 667 kilometres an hour outpaces its rival's 510 km an hour.

Some analysts, including Walter Spracklin at RBC Dominion Securities Inc. and Cameron Doerksen at National Bank Financial Inc., view the Q400 as having the momentum.

WestJet, which has stressed that it isn't interested in acquiring Porter, said Wednesday that it's examining rival turboprop bids as it moves to diversify its fleet of Boeing 737s.

"We're still evaluating both aircraft and hope to announce a decision later, some time in the months to come," WestJet spokesman Robert Palmer said.

WestJet said the new pact will allow the carrier to provide extra seat capacity for passengers who book on Thomas Cook's Sunquest Vacations unit next winter. "As an expansion to its successful two-year, Canada-wide partnership with Thomas Cook, WestJet will be the only airline providing capacity for Thomas Cook's tour operator arm in the Canadian market," the airline said.

Halifax-based Jazz, a unit of Chorus Aviation Inc., also flies regional routes on behalf of Air Canada but those services are separate from charters. 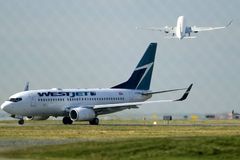 Another take on Air Canada: It's the government's fault
May 3, 2018 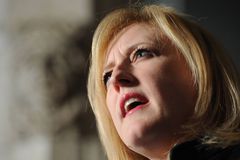