Under the current regime, Bombardier Inc. and its investors have suffered through a string of disappointments spanning years, putting the company's credibility in question. At a critical phase in its evolution, Bombardier announced a change in leadership on Thursday, as well a series of financial measures designed to preserve capital, raise cash and finance the development of its planes. Here are five things you need to know about the changes at Bombardier.

Both father and son have ceded their posts, making way for new era in the company's leadership ranks. Laurent Beaudoin is leaving as chairman, ending a storied tenure with the company that began in earnest when he became president of Bombardier in the 1960s, shortly after the death of company founder Joseph-Armand Bombardier. Under his leadership, Mr. Beaudoin transformed the company into a transportation multinational before handing the reins to his son Pierre in 2008. His reign a rocky one, Pierre announced on Thursday that he would step aside as president and CEO, assuming the role of executive chairman. He will be replaced by Alain Bellemare, who left United Technologies Corp. last month after an 18-year career, including a stretch as president of Pratt & Whitney Canada, which builds engines for Bombardier's C Series jets.

The company's namesake family has relinquished some control in the executive suite, with Laurent Beaudoin retiring and the CEO office now to be occupied by Mr. Bellemare, the third CEO in the company's history to come from outside the family. But the Bombardier family will maintain a tight grip on the world's only manufacturer of both planes and trains. Like many family-run companies, Bombardier has a dual-class share structure, with each class A share representing 10 votes. The Beaudoins and Bombardiers hold a big majority of class A shares.

The more-widely traded class B shares have not proven to be lucrative investments for several years. The financial crisis and ensuing recession saw spending on corporate jets and commercial aircraft slashed, sending Bombardier's stock into a steep decline from which it has never fully recovered. Investors lost confidence in the stock again in 2011 over weak regional aircraft sales, the loss of a $2.3-billion (U.S.) deal for the U.K.'s Thameslink rail system, and concerns about the company's C Series passenger jet program. In January, amid pressures on the company's cash flow, Bombardier suspended development of its new Learjet 85 and cut 1,000 jobs. Over the next few trading days, the stock declined by almost 40 per cent, setting a new 6-year low.

The company's changes were announced in conjunction with the release of fourth-quarter financial statements, which were discouraging. Even after a prior warning to investors, Bombardier's earnings still managed to fall short of analysts' expectations. Free cash flow fell to $590-million from $771-million a year earlier, which made suspension of the company's quarterly dividend an expected announcement, given the cash crunch. The company distributed $182-million in dividends in 2014. To protect its balance sheet, Bombardier also said it would issue up to $600-million of new equity and up to $1.5-billion of new debt. In a trend now familiar to Bombardier's shareholders, the stock declined 18 per cent shortly after the start of Thursday trading, briefly setting a new multi-year, intraday low of $2.50, before inching higher.

The fate of Bombardier still very much hinges on the C Series jet program, which has been plagued by delays and cost overruns. The company's biggest line of planes, intended to compete with smaller passenger jets from Boeing and Airbus, were supposed to go into service in 2013. On Thursday, Pierre Beaudoin said the cost of the program has risen to $5.4-billion, up by about $1-billion from a year ago. He also said the plane is scheduled to go into service in the second-half of this year, although the market has long become used to missed deadlines on the C Series. 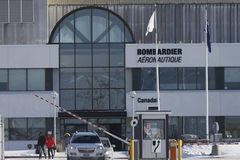 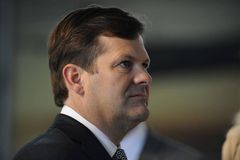