Retailers are bracing for a year of uncertainty – and even some failures – as weak players scramble to turn around their flagging operations amid growing pressures from expanding low-budget and e-commerce heavyweights.

U.S. discounter Target Corp. faces crucial decisions in reassessing its money-losing Canadian division after launching it in March, 2013. Sears Canada Inc., which has been on a downward spiral for years, struggles to keep customers. And U.S. e-commerce titan Amazon.com Inc. is adding more products and services to its site, inevitably pinching other players in its online battle with giant Wal-Mart Stores Inc.

"I think there will be important milestones in 2015 in terms of who's going to win and who's going to lose," said Sylvain Prud'homme, president of Lowe's Canada, which is mapping out its expansion, to 62 stores in three years from 37 now, in the crowded home-improvement retail field.

On the heels of two years of massive change and slowing shopper traffic to many stores in a digital age, retailers in 2015 look forward to more of the same in some segments such as electronics, books, office supplies and fashion. They will feel the urgency to keep adjusting their operations to take on rising competition.

Already in 2014, a string of retailers, such as Mexx Canada and Boutique Jacob Inc., have filed for creditors' court protection or bankruptcy. Others are expected to follow suit in the battle with low-cost foreign giants, which include H&M (Swedish), Zara (Spanish) and Forever 21 (American). Women's clothing specialist Reitmans (Canada) Ltd. is closing stores, including its entire Smart Set chain.

"The competitive intensity is such that there will be fewer players," said Joe Jackman, founder of retail consultancy Jackman Reinvention, which has advised on the transformation of Old Navy, Rexall and others. "But there is a lot of room for new ideas and relevant offerings."

There will be bright spots. Department-store chain La Maison Simons is expanding outside its Quebec base and is gaining momentum in its privately-held business. Canadian Tire Corp. Ltd. has enjoyed improved results as it updates its operations after relaunching its full e-commerce site last year and sharpened its sporting goods division, led by Sport Chek, which it acquired a few years ago.Hudson's Bay Co. is preparing for expansion, including investing heavily in its e-commerce and bringing its U.S. luxury Saks Fifth Avenue and sister discount chain Saks Off 5th to Canada by 2016.

"Next year is a pivotal year for online retail in Canada," said Richard Baker, executive chairman and governor of HBC. It is focused on improving its online selling and ironing out wrinkles. At times, for example, shoppers end up buying products on its website only to discover at the checkout that the items are unavailable.

"We're having a hard time keeping up with the demand," Mr. Baker said.

"We are spending money and spending time and energy improving it and fixing it. It's getting better and better every day."

The luxury retail battle will heat up in 2015 as U.S. Nordstrom Inc. adds more stores here and Holt Renfrew & Co. launches its e-commerce by the end of the year. But in the midst of the online war, Target doesn't even offer cybershopping in Canada.

Target will grapple with tough choices. Under new leadership, it put a big push in the fall on shoring up its inventory levels and slashing its prices after customers complained of high prices and empty shelves.

Amid other merchandising changes, it is now monitoring overall consumer sentiment toward the retailer, Brian Cornell, the chain's new chief executive officer said in November after releasing improved third-quarter results. Customer response "will inform our perspective as we continue to assess our longer term potential in Canada," he said, adding that to succeed here the retailer needs "a major step-change in performance."

Some analysts have speculated the retailer could pull out of Canada or close stores if it doesn't see meaningful improvements. But the repercussions of a stronger player taking over Target stores could put even more pressure on incumbents, retail analyst Perry Caicco at CIBC World Markets has warned.

Wal-Mart would be the most obvious buyer of Target stores if they go up for sale, he said.

Grocer Loblaw Cos. Ltd. could use some of the space for its fashion chain Joe Fresh; and even HBC, which sold its Zellers leases to Target to pave the way for its entry into Canada, could pick up some outlets, Mr. Caicco predicted.

Still, Mr. Baker said HBC is not looking at purchasing Target stores if they come on the market. A Wal-Mart spokesman did not respond to questions.

A new foreign entrant in the market could shake it up even more. "Fearless" European discount grocers, such as Aldi, Lidl, Rewe or Netto, which have snatched business from traditional players overseas could set up shop here, Mr. Caicco said. "We expect an entry announcement in 2015."

Even without new players, retailers will need to up their game because they can expect to get little help from the underlying 2015 economic currents, Mr. Prud'homme at Lowe's said. The chain, which has enjoyed six consecutive quarters of same-store sales growth, is counting on improved product offerings and online selling to keep stealing market share from rivals, he said. He anticipates consumer confidence to remain relatively flat and gross domestic product to rise roughly 2 per cent in 2015.

Lowe's is still interested in an acquisition in Canada if a willing candidate emerged, Mr. Prud'homme said. The company tried unsuccessfully a couple of years ago to take over the struggling Rona Inc., which is now working to turn around its operations under new leadership.

Retail consultant Ed Strapagiel predicts retail sales will rise 4.9 per cent to $530.8-billion in 2015, almost the same as the 4.8 per cent expected this year. E-commerce sales, on the other hand, will pick up in the double digits, although comprise about 12 per cent of total sales, he said.

A "marginally improved" Canadian economy in 2015 "will help some retailers and consumer goods companies, but not be enough to save the really bad ones," Mr. Strapagiel said.

Bargain hunter's mantra: 'Grab our stuff and get to the front'
December 26, 2014 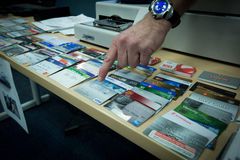