Premium parka specialist Canada Goose is taking its first major step outside of its core outerwear category as it launches a line of sweaters for up to $650 a pop even as it rapidly expands globally and beyond winter clothing.

The Toronto-based company, which went public this year, is betting that consumers will be ready to open their wallets for Canada Goose knitwear to keep them warm in the same way that its jackets serve a similar purpose.

"We're launching knitwear in a small way at the beginning – it's going to be hard to get," Dani Reiss, chief executive officer of Canada Goose Holdings Inc., said in an interview Monday as the sweaters began to appear in select stores and online.

"We envision this becoming important over time … We're known for warmth – we're known for function – and these products provide all of those attributes."

Canada Goose, whose shares were snapped up by investors after a March initial public offering (although they have lost some steam since), is moving rapidly in new directions amid stiffer competition from rivals also producing $1,000 parkas. Now, it is wagering that its status-symbol logo and name will help win it more business in knitwear.

Brian Tunick, retail analyst at RBC Dominion Securities, said in a report in the spring that other fashion companies, such as Michael Kors, have been forced to take additional price markdowns to woo customers when expanding into new categories. They have felt the heat of rivals offering similar products, including online competitors.

"The Canada Goose customer seems most willing to consider Canada Goose's foray into the lightweight jacket, gloves and parkas categories – categories we do not consider unreasonable given their 'above the waist'/cold-weather positions," he said. "This customer affinity appears to be taking hold."

Sales in the $26.35-billion (U.S.) North American sweater category, which includes sweatshirts, rose 3.7 per cent in 2016, according to market researcher Euromonitor. Those sweater sales have been growing at a compound annual rate of 3.3 per cent between 2011 and 2016, although they're forecast to rise by just 2.1 per cent until 2021, the researcher says. (The data doesn't break out high-end knitwear.)

Mr. Reiss added that, globally, the sweater market looks attractive. His data, compiled by Euromonitor, show that overall global sweater sales are set to increase almost 24 per cent to $104.8-billion in the next five years.

"Knitwear is a large category," he said. "It's a natural first step for us to get into an adjacent category that is not outerwear."

But he said Canada Goose will ensure its knitwear items are top quality, as it does with its coats. "We're not the kind of company that just puts logos on products."

To keep quality high, the company is making its knitwear in Italy, even though it touts its coats as made in Canada, he said. Its sweaters, for men and women, range in price from $295 (Canadian) to $650 including styles that combine down and Merino wool.

Wendy Evans of retail specialist Evans & Co. Consultants said some Canadians may be disappointed that Canada Goose knitwear isn't made in Canada. And she said the company will have to gain more brand awareness outside of this country. Even so, sweaters are "a great brand extension" for Canada Goose, she said.

Mr. Reiss acknowledged Canada Goose initially will not enjoy as big profit margins with its knitwear as it does with its outerwear. (Its overall gross margins stood at 52.5 per cent by its March 31 year-end.) The company will need to invest in marketing and distributing the knitwear more widely before it will achieve the same margins as those of outerwear, he said. Last year, Canada Goose generated annual sales of more than $400-million and eventually aims for $1-billion.

The company is moving slowly into the new category, adhering to its strategy of product scarcity to help create more demand. "I believe it will sell out quickly," Mr. Reiss said. "I think the demand for the product will exceed the supply by quite a large margin."

Canada Goose knitwear will be sold at some Holt Renfrew, Harry Rosen, Saks Fifth Avenue and Nordstrom stores as well as in its namesake shops in London, Chicago, Boston and Calgary and its e-commerce site.

In the meantime, Mr. Reiss is considering introducing other product categories, including boots and bedding. "We continue to evaluate all options," he said. "We're not going to be making bathing suits and flip flops any time soon." 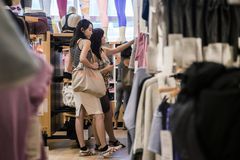