Investment by auto makers in Canada doubled last year from 2014 levels, but the country failed to win any of the three new assembly plants that were announced for North America, pushing Canada's losing streak for new plants to a decade.

Auto makers announced investments worth $1.5-billion (U.S.) in their existing Canadian factories in 2015, according to data compiled by the Center for Automotive Research, an industry think tank based in Ann Arbor, Mich.

Mexico won $4.5-billion in investment, down from $7-billion in 2014, but was chosen by Toyota Motor Corp. as the site of a new vehicle assembly plant – the eighth new assembly plant announced for Mexico since 2010.

The lion's share of new investment went to the United States, which will receive $29.3-billion in new spending, including a new Volvo Cars Corp. plant and a Daimler AG commercial van factory.

The assembly plants that are now under construction – plus expansions under way that will increase vehicle production at several existing factories – will begin turning out vehicles just as the North American market is expected to hit a sales peak in a decade-long recovery from the 2008-09 recession.

The flood of new production capacity that is already coming on stream or is set to hit the market later this decade has raised concerns that auto makers will begin to rein in spending on new factories. If that is the case, auto makers will have bypassed Canada for an entire investment cycle, meaning the country is unlikely to reverse its new-factory losing streak any time soon.

Automotive credit is tightening and is expected to hit sales in the United States analysts at Montreal-based Pavilion Global Markets Ltd. said on Monday, echoing comments made by U.S. analysts in recent weeks.

"Mexico and Canada likely will also feel some consequences from a peak in the U.S. auto cycle," Pavilion's analysts said. "Both countries' auto sectors depend on U.S. demand and are integrated closely with the U.S. industry. A peak would hurt both countries, but especially Canada, where there has been evidence of a loss of competitiveness in recent years."

"We are closer to the end of the [sales] cycle than the beginning," Mr. Robinet said.

Ray Tanguay, the former president of Toyota Motor Manufacturing Canada Inc., who is now a special auto adviser to the Ontario and federal governments, said last week that it's possible that a new cycle of automotive investment won't begin until 2020.

Mr. Tanguay was appointed in part to advise the two governments about what they need to do to win some of that new automotive investment that has been flooding into Mexico and the southern United States.

The largest was Fiat Chrysler Automobiles NV, which said last week that it has spent $3.7-billion (Canadian) since September, 2014, to design and develop a new minivan and retool the Windsor, Ont., plant where the vehicle is built. The company has not said how much of that money has been invested in Canada.

General Motors Co. said last February that it will join with suppliers to spend $560-million at its Cami Automotive factory in Ingersoll, Ont.

Toyota Motor Canada will invest about $500-million in its Cambridge, Ont., plant to build RAV4 crossovers, which will replace Toyota Corolla production. The Corolla is moving to Toyota's new Mexican plant.

While they may pause new investment in assembly plants, auto makers are spending billions of dollars developing battery and hybrid-powered vehicles and autonomous cars in an industry that is being disrupted by new technologies and high-tech new players such as Apple Inc. and Google parent Alphabet Inc.

"We've had decades of being a leader in building cars and [auto] parts," Mr. Duguid said. "All of that can continue if we can be a leader in disruption. The jurisdictions that step up and lead the technological disruption will be the ones that will do well over the next 20 or 30 years." 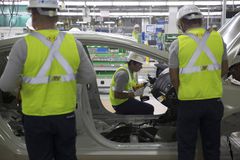 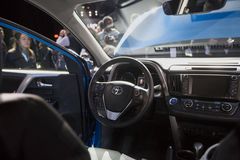