Higher stamp prices, more parcels delivered and better stock market returns at its massive pension plan helped the troubled Crown corporation – which includes Purolator and other businesses - to a small $67-million profit in the second quarter on revenue of $2-billion.

But company officials aren't nearly ready to declare the job done. Canadians continue to send fewer letters to an ever-growing number of addresses, leaving Canada Post in a constant struggle to break even.

"Basically, the erosion of mail volumes is unstoppable," Canada Post spokesman Jon Hamilton said. "We're working to outrace that erosion while trying to build a new platform to serve Canadians."

Canada Post announced a massive overhaul in December that included a steep stamp price hike, the phase-out of home delivery for millions of Canadians and up to 8,000 job cuts. The measures are projected to boost revenues or cut costs by as much as $900-million a year by 2018.

Mr. Hamilton said other national postal systems are closely watching Canada Post's aggressive efforts to cope with a global phenomenon of dwindling mail volumes as individuals and businesses shift to other methods of communicating. Canada Post is required by law to remain financially self-sufficient while still delivering mail to all Canadians.

"We're all going through the same issues," he pointed out.

The U.S. Postal Service, like Canada Post, has tried to raise prices and focus more on delivering parcels to online shoppers and businesses. But it's been much less aggressive at cutting services and closing post offices. As a result, it continues to run up staggering losses – roughly $2-billion a quarter.

Britain's recently privatized Royal Mail is making healthy profits as an independent company, but only after the British government took on many of its legacy debts, including huge pension obligations.

The harsh reality for Canada Post is that its largest business – delivering letters – continues to dwindle. Through two quarters of this year, the post office delivered 117 million fewer letters than it did in the same period last year – a drop of 4.7 per cent. The post office said the one-time effect of provincial elections in Ontario and Quebec helped keep the decline to just 2.3 per cent in the second quarter.

So Canada Post is trying to transform itself from a letter delivery company that ships parcels on the side to a parcel company that also carries letters.

Parcels continue to be a good business. Parcel volumes grew by 2 million pieces in the second quarter, up 6.5 per cent, as more Canadians buy goods online. As a result of price hikes, parcel revenues rose more than 11 per cent in the quarter.

"The biggest glimmer of hope is that the parcel revenue is increasing as we chase e-commerce," Mr. Hamilton said. "We're seeing less and less mail, and more and more parcels. Canadians are essentially telling us what they want us to be."

Canada Post has projected that it will lose $274-million before taxes this year, in spite of its restructuring.

Through two quarters, the company said it is now "tracking ahead of plan" and those improvements are expected to continue for the remainder of the year.

"We're encouraged by these results, but we have a long way to go," Mr. Hamilton remarked.

The most significant piece of Canada Post's transformation is the end of home delivery for roughly 5 million Canadian households, which will be shifted to so-called community mail boxes by 2018.

The company is ending delivery to 100,000 homes by the end this year. In 2015, another 1.17 million homes will be cut off. The next batch of households slated to lose home delivery next spring include parts of Calgary, Winnipeg, Hamilton, Ont., Montreal's South Shore, Halifax and various communities in the greater Toronto area, including Milton, Thornhill, Unionville and Whitby, Ont. 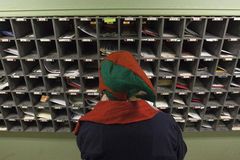 Demise of Canada Post delivery not an issue in Oakville, Ont.
February 20, 2014 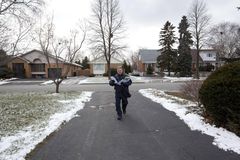 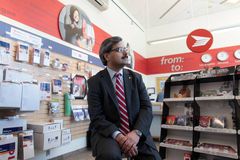 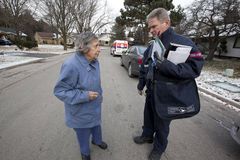