Canada and the United States have finalized new rules for securing trains in hopes of preventing disasters such as the deadly derailment at Lac-Mégantic, Que., where a runaway oil train exploded in the middle of town.

But the wording of the two announcements highlights a deep disparity between the two countries' oversight of the sector. The new U.S. rules are much more detailed and stringent than the Canadian requirements, which are vague and appear open to interpretation by the railways.

In separate announcements on Wednesday, Transport Canada and the U.S. Federal Railroad Administration enacted a series of procedures for securing trains, essentially turning emergency measures introduced after the Lac-Mégantic tragedy into long-term requirements for the industry.

In July, 2013, a parked train carrying 72 tanker cars of crude oil rolled down a hill and derailed in Lac-Mégantic, causing massive explosions and killing 47 people. The train was held in place by an insufficient number of handbrakes, which the train operator set on the tanker cars. It was the worst disaster in Canada's modern-day rail industry.

Under the new rules made official in each country, a standard number of handbrakes must be set when trains carrying hazardous material are parked for the night and operators must verify this information with another person at the railway before leaving the train.

The U.S. regulations require train operators to verify that the train has been properly secured with another "trained and qualified employee." That means the person with whom a train operator verifies his work – such as how many brakes were set and how – must be specifically versed in braking systems, rather than confirming with an employee, such as a dispatcher, who may not be a specialist.

In Canada, the regulations are more general, stating only that the rail operator must verify with "another employee" at the railway. There is no stipulation that the other employee undergo any special training. When asked this week for a clarification on what expertise is required for the second employee ensuring the train has been secured, Transport Canada officials were unable to say.

The U.S. rail authority believes the only way a train can be properly secured is if the second employee double-checking the conductor's work is "qualified" and has been "trained on the railway's securement requirements," the FRA said in a statement.

"Verifying that a train has been properly secured is a common-sense solution to prevent accidents," U.S. Transportation Secretary Anthony Foxx said.

Relying on the right skills to determine whether the train is secure is a concern given the events of the Lac-Mégantic derailment. The train's engineer had several discussions with a dispatcher at the end of his shift. However, transcripts show the dispatcher did not discuss proper securing of the train prior to the accident.

Had the engineer discussed the securing of the train with someone who had knowledge of brake systems, that person would have likely realized there was a problem that night.

The parked train was being held in place mostly by the air brakes, which failed when the lead locomotive was turned off after an engine fire was extinguished. The train began to roll a few hours later, when the handbrakes on subsequent cars were not enough to hold it in place without the air brakes backing them up.

The Transportation Safety Board of Canada's investigation of the accident found several factors led to the disaster, including highly volatile crude oil from North Dakota, which was much more explosive than regulators and the rail industry believed was possible at the time. The board also listed faulty train securement as a major cause.

In October, the Canadian government issued an emergency directive to the rail industry requiring "more robust" steps to secure trains. "There remains sufficient residual risk that without additional layers of defence, uncontrolled motion of railway equipment could still occur, with possibly catastrophic consequences," Transport Canada said at the time.

The new steps laid out how many brakes must be set by the train operator when parking a train, depending on how much it weighs and the slope of the hill it is sitting on. Previous Canadian regulations required only a "sufficient number of handbrakes to be applied," but those regulations did not prescribe a specific number. The new requirements also require train operators to test the adequacy of the handbrakes by releasing the air brakes, which are controlled by the locomotive engines, to see whether the train moves. 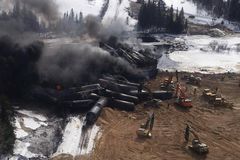 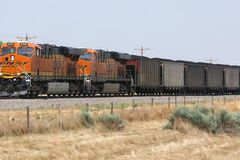 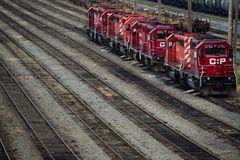