Canada's meat industry says controversy over the temporary foreign worker program has made it increasingly difficult for processing plants to hire enough staff to remain competitive.

There are concerns that changes to the federal program the industry expects the government to roll out in the coming weeks won't help it fill hundreds of vacant jobs.

"We do feel that we are going to have a severe critical labour shortage. It is happening already," Ron Davidson, a spokesman for the Canadian Meat Council, said Tuesday from Ottawa.

"It has been getting worse for the last year and we fear that the new changes will be blanket changes to the program, and that it will be very difficult for our meat plants to remain sustainable."

Davidson said the labour shortage became more of a challenge last year after problems with the program in the mining and banking sectors made national headlines. The government responded by tightening the rules.

He said it has become more difficult since then for companies to get applications to hire foreign workers at beef or pork slaughter plants approved by Ottawa.

"The government introduced new requirements that have made it increasingly progressively difficult to get approvals. We are not now getting the numbers of workers that we require to supplement the Canadian work force."

In recent months, applications for the program are being refused, he said.

Masswohl said there is concern federal government changes to the program might not recognize a legitimate need for temporary foreign workers in the livestock and meat-processing sectors.

The government has been lying low due to negative reports in the media and hasn't given the industry a clear sense of its planned reforms, he said.

"They are kind of in this hunkered-down mentality. We just want to make sure that they don't overcompensate and throw the baby out with the bathwater."

Masswohl suggested that without enough foreign workers, companies will have to export more live cattle to the United States.

Cargill said its High River plant is exceptionally strained when it comes to labour and must hire foreign workers to round out its production teams.

"Without this program and access to labour, we would not be able to keep our facility in High River operating competitively," Brigitte Burgoyne, a Cargill spokeswoman, wrote in an e-mail.

"Without a full labour force we cannot maximize value of cattle being processed or the efficiency of our plant operations."

Burgoyne said when Cargill hires temporary foreign workers, it is with an eye toward them becoming permanent Canadian residents. More than 90 per cent of the foreign workers it has hired have made this transition, she said.

Cargill said it works closely with the United Food and Commercial Workers union on its program. All workers receive the same pay and benefits.

Officials with Employment and Social Development Canada were not available for comment.

The government has said that reforms are coming that will ensure that Canadians are always first in line for available jobs.

The number of temporary foreign workers has ballooned under the federal Conservatives to as many as 338,000 working in the country now from about 100,000 people in 2002.

'Buy American' driving a truck through NAFTA’s loopholes
May 12, 2018 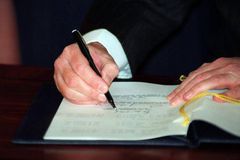