Canada's vast network of bank branches will shrink in 2017, with dozens of locations closing as institutions cut costs and invest billions in technology as more customers migrate online.

Banks aren't giving up on branches just yet – many existing locations will be overhauled to focus more on giving advice, leaving tasks such as processing routine transactions to technology.

But as large banks including Toronto-Dominion Bank, Canadian Imperial Bank of Commerce and Bank of Nova Scotia have collectively recorded billions of dollars in restructuring charges in recent years, pressure to shrink their real estate footprints and trim staff has intensified, even as executives are wary of alienating customers by pulling back too quickly.

As housing prices surge, so does mortgage fraud

Bank branches are often singled out as examples of institutional stodginess, but also hailed as critical touchstones for gaining customers' loyalty. And as online alternatives proliferate, executives in charge of deciding the fate of branches across the country are being pulled in two directions.

At Scotiabank, 80 per cent of basic payments and transfers are now done online, often through a mobile device. "And that number's not going to go down, it's going to go up," said CEO Brian Porter, speaking at a conference of bank executives hosted by Royal Bank of Canada on Tuesday.

Over at TD, 80 per cent of sales come from physical branches, according to CEO Bharat Masrani. "Let's not underestimate the power of the physical distribution," he said, calling the bank's branch network "a sales machine."

All this is happening as banks spend massive sums of money on technology, much of it new, from back-end systems to apps for retail customers. Scotiabank expects to spend $2.5-billion to $2.6-billion on tech this year, at least 60 per cent of which will go to maintaining existing systems, while the rest is spent on new innovations.

Scotiabank has been as aggressive as any bank about shuttering unwanted branches, having closed about 80 locations in the last two years. The bank expects to cut another 5 per cent of its remaining branches, which now number fewer than 1,000 in Canada.

At the same time, it has opened another 20 branches, some of which are experiments with more modern formats – Express branches, with only three or four employees; and Solutions branches, which cater to customers making big decisions such as buying a first home, saving for education or holiday planning.

CIBC expects to trim its 1,100 banking centres, as it calls its branches, nearer to 1,000 by 2019. "We've taken the view that transformation happens over time," said CEO Victor Dodig, and to rush clients out of branches too quickly would only breed dissatisfaction.

The remaining CIBC locations are being revamped to be "smaller" and "smarter," Mr. Dodig said. The bank is spending "in excess of a billion dollars a year" on technology projects. About 45 per cent goes to maintenance.

TD has traded in a one-size-fits-all model for its branches for seven different models, and has opened self-service branches in Calgary that have no tellers, adding WiFi and iPads.

And Bank of Montreal has opened a number of "smart branches" designed to "mix the technology with human contact," said CEO Bill Downe. These branches have no tellers, but are instead experimenting with virtual staff who appear on screens built into bank machines. The few employees in the building are "much more like a coach" for customers, he said.

Editor's note: The online version of this story has been corrected to show that CIBC will reduce its number of bank branches by 2019. 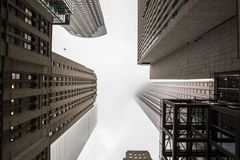