When Zane Caplansky went to Toronto's Olympic Island Festival in 2010 to serve his signature smoked meat sandwiches and brisket sliders, he had a revelation. With a captive and hungry audience of music fans there to hear the likes of Arcade Fire and the Sadies at an all-day concert, it should have been a windfall for the eponymous Caplansky's Deli. But Mr. Caplansky couldn't keep up with demand.

"We were making everything by hand," he says, retelling the story. "Customers were frustrated, and across from us, there's this poutine truck serving fast all day."

Unlike Mr. Caplansky's mobile setup, the poutine truck was fully equipped to provide fast service that could deliver to the high volume of customers there. People who preferred Caplansky's didn't want to wait in line for three hours, and so the deli lost a lot of potential business. The choice for Mr. Caplansky was clear: He needed to get in the food truck business.

The next summer, Caplansky's Deli debuted Thunderin' Thelma, a $90,000 food truck affectionately named after his nana.

Emblazoned with an image of Mr. Caplansky, one of a new breed of food-truck operators who go well beyond the traditional hot dogs an hamburgers, his offerings were an instant hit on the local food scene.

They followed the lead of American counterparts in cities such as Portland, Austin and Los Angeles.

The rise over the past several years of such food trucks, which offer fresh foods from creative young chefs looking to fill a gap in the market, is not limited to Toronto. They have been heralded as invigorating the food scene in cities across Canada, but business isn't always easy.

In Tofino, British Columbia, Jason Sussman and Kaeli Robinsong founded Tacofino in 2009, and their friend Ryan Spong joined as a business partner a year later. There was a certain amount of excitement for what this new type of food truck could offer – the lower startup costs meant new entrants could more easily get into the business, experiment with different locations, and distinguish themselves from traditional street food like hot dogs by offering fresh, creative dishes.

Other food trucks, with names like Thailicious (Ottawa), Attila the HUNgry (Edmonton) and Steakout Truck (Calgary) have popped up around the country. Even in chilly Winnipeg, 15 food trucks now roam the streets.

"The revolution is you have these great chefs, and they're making food with fresh ingredients," says Mr. Spong, whose business specializes in Mexican meets Asian fusion.

While food trucks only represent 1 per cent of the U.S. restaurant industry, that's still $650-million, according to a 2012 U.S. study by Intuit. Growth is expected to continue, with a fourfold increase projected by 2017.

Despite the numbers, Mr. Caplansky and Mr. Spong point out that food trucks face unique challenges.

"People think that owning a food truck is a gold mine and a recipe for success, but it really isn't," says Mr. Caplansky, who founded the Toronto Food Truck Alliance.

"We have all the same concerns as a brick-and-mortar restaurant, plus mobility."

Mobility has its difficulties. Trucks break down, and few mechanics are willing to work on them. Poor weather is also a concern, because as delicious as kimchi fries and curry burritos may be, people do not like to wait in rain or snow.

"It's a tough business on the street," says Mr. Spong, who adds most vendors also need a standalone venue in which to prepare food, whether a restaurant or commissary. "If you have to have a standalone kitchen, and staff for both, then you have a very high break-even each day."

In addition to the startup costs of purchasing a vehicle, Mr. Spong says Tacofino pays over $3,000 a month in costs unique to the vehicle, not including the permit fees.

Given all the challenges, food trucks have their skeptics.

"It's not a viable business model," says Arron Barberian, who co-owns Barberian's Steakhouse in Toronto and is chair of the Toronto Restaurant Industry, a lobby group.

"The restaurant business is a very difficult business, and when you add the additional difficulties of a truck, it doesn't work," adding that he doesn't have anything against food trucks, but believes they're a fad.

Many food truck owners argue municipal regulatory and fee changes make it more difficult for their model to succeed.

In 2013 Montreal lifted a 66-year ban on food trucks, but included regulations that applicants must have an established restaurant, cannot be parked within 60 metres of a brick and mortar restaurant, and must pass a taste test of expert judges.

Food truck operators say Toronto's permit fee is prohibitive at more than $5,000 a year, while and trucks must be 50 metres away from established restaurants.

Despite making 125 permits available in May, only nine food trucks have decided to purchase, the majority of trucks choosing to rent from private property owners such as commercial parking lots and serving festivals and events, which can be lucrative and come with a relatively predictable volume.

Mr. Caplansky does not plan to buy one of the permits, and has not enjoyed the regulatory process.

"It has been the most frustrating, most difficult, most painful experience I've ever undertaken," he says. "The fact that only nine mobile vending permits have been purchased speaks for itself."

City officials from Vancouver, Toronto and Montreal each stressed that the regulations were meant to balance competing business interests while meeting planning and health requirements.

Despite his frustration, Mr. Caplansky remains upbeat about the potential for food trucks.

"Six or seven members of the Food Truck Alliance are now starting up brick-and-mortar restaurants -- food trucks served as an incubator for them." 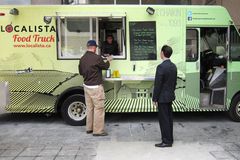