Deloitte Canada has found a surprising answer to the mystery why Canadian companies chronically underinvest in the things that would make them more productive.

The hitch: More than a third of Canadian companies mistakenly believe they are spending as much or more than their competitors when, in reality, they are not, according to research being released Thursday by Deloitte.

"A third of Canadian companies are materially underinvesting, and they don't even know it," Deloitte Canada vice-chairman Bill Currie said in an interview. He called the findings "disturbing."

The results may help explain the large and widening gap between Canadian and U.S. productivity – now at roughly 20 per cent, Mr. Currie said.

The average Canadian worker contributes $42 (U.S.) in gross domestic productive for every hour worked. That compares with $52 for Americans, according to the study The Future of Productivity: A Wake-up Call for Canadian Companies. That performance ranks Canada 13th in productivity out of 16 leading developed countries.

Economists have long focused on structural reasons for the productivity gap, such as Canada's heavy reliance on resource extraction, a preponderance of smaller companies and the thinly spread population.

But the Deloitte research – part of a three-year productivity project – suggests the problem may be as much a function of business culture, as it is about the structure of the economy.

"Attitudes and behaviours in Canadian firms about their investments contribute significantly to the persistent and growing productivity gap," the study concluded. "Underinvesting firms don't know they're underinvesting."

Deloitte bases its conclusion on a major survey of 884 Canadian businesses that found that 36 per cent of Canadian companies incorrectly believe they are investing more than their peers in R&D, technology and new machinery.

Deloitte labels these companies as "overconfident" because they invest below the median, relative to firms of similar size and in the same industry.

Mr. Currie said he and his colleagues were surprised to find so many Canadian companies detached from the realities of their own business environment.

The tricky part is convincing these chronic under-spenders that they are at the root of the country's productivity problem.

"The challenge is convincing 36 per cent of our companies to solve a problem they don't know exists," Deloitte said.

Mr. Currie said these companies are everywhere in Canada – large and small, and in all industries. "We expected to find a difference in behaviour by sector and geographically, and we did not get that."

Deloitte estimates that closing the perception gap could significantly narrow the difference in Canadian and U.S. productivity.

"Putting a mirror in front of businesses and saying, 'you have to invest in yourself,' is important," Mr. Currie said.

He suggested that Canadian companies are too inward-looking. They may track their spending relative to their own business performance and past practice, but don't spend enough time studying competitors and the marketplace.

He pointed out that industry associations could be doing a better job of helping companies to benchmark and share data on investments.

An ongoing frustration for many experts and policy makers is that Canada has taken significant steps to improve the country's productivity performance, with little to show for it.

For example, Canada has stabilized inflation, opened up to trade and investment, reformed capital taxes and introduced some of the most generous R&D tax credits in the developed world. 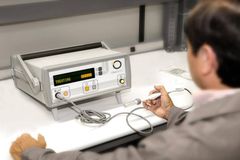