A coalition of U.S. grain companies has complained to the U.S. railway regulator about deteriorating service and new and higher charges at major North American railways.

The criticisms echo those levelled in Western Canada, where poor rail service has left some farmers short of cash, sparked a scolding from the federal government and led to the ouster of one railway chief executive officer.

The National Grain and Feed Association, a Virginia-based group of 1,000 companies that buy and sell wheat and other field crops, says the Class 1 railways, including Canadian National Railway Co. and Canadian Pacific Railway Ltd. are reducing service and charging higher fees in "aggressive efforts to impress Wall Street investors" with better operating ratios.

The group said rail-industry layoffs and reduced locomotive fleets have "degraded service to unacceptable levels" and left the carriers with no ability to meet any surge in demand. Shippers are faced with long delays sending or receiving grain and have to rely on more expensive trucks to avoid more shutdowns of mills and factories, said the letter dated March 10 to Ann Begeman, acting chair of the Surface Transportation Board (STB).

"These issues far transcend the routine imperfections in rail service performance to which rail customers unfortunately have become accustomed, and cannot be explained away by the vagaries of weather," said the letter, posted by the STB on its website.

The STB is an independent government agency that adjudicates service and rate disputes between railways and reviews merger proposals.

Dennis Watson, an STB spokesman, could not say what steps the regulator might take in response to the complaints, if any. "The STB is aware of it and they have let the public know about it," he said.

The government of Canada has told the leaders of both Canadian railways to describe how they will clear the grain backlog and maintain traffic flow on their networks.

CN and CP blame the network congestion on a harsh winter and surging freight volumes.

CN apologized to customers last week and said CEO Luc Jobin would be replaced by marketing chief Jean-Jacques Ruest, who will serve until a new leader is hired.

Mr. Ruest said on Wednesday train speeds are rising as winter recedes. But it will take months before new locomotives, crews and track improvements will be felt across the company's network.

CN's grain carloads rose by 2 per cent in the most recent week, but are down by 15 per cent year to date, compared with the year-earlier period, according to company data. During the same time, container carloads are up by 8.5 per cent.

At CP, grain carloads are down by 8 per cent this year, while six other freight types have increased, including energy and containers.

The numbers underscore a complaint by Canadian grain companies represented by the Western Grain Elevator Association. The group says railways are focusing on the more competitive and lucrative freight, knowing grain will sit.

A CN spokesman declined to address shipping fees. CP did not respond to a request for comment.

Christopher Smith, the CSX spokesman, disagreed with the U.S. grain group's contention the company's service was poor. "Putting aside complaints from anonymous sources at unspecified points in time, the facts reveal an operating model that has created a more fluid freight network, faster transit times, increased reliability and greater frequency of service for our agribusiness customers," he said in an e-mail.

The National Grain and Feed Association did not respond to an interview request.

In its letter to the STB, the U.S. grain group singled out CN, CP and CSX for raising prices on a long list of items that are separate from actual shipping charges, and noted shippers are facing higher fees "across the freight rail landscape."

According to CP's website, this includes a new $1,000 fee if the customer's rail cars have "faded stenciling" or a "slightly torn placard that is still completely legible." The charge for correcting a bill of lading rose by 280 per cent to $400, the U.S. grain group said. 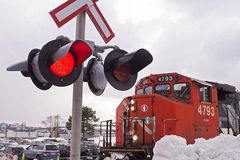 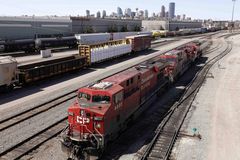