Canadian Tire Corp. Ltd.'s focus on digital and cost-saving efforts paid off in its first quarter, shifting the retailer further into new cyberterritory.

The company recently launched a catalogue that marries print with online while the retailer tested an array of digital initiatives. And it is considering allowing people to push the "buy" button and purchase items from its Sport Chek sporting-goods chain on Facebook, said Michael Medline, chief executive officer of Canadian Tire, in an interview on Thursday.

He said the retailer would be giving Facebook users the opportunity to buy Sport Chek goods without having to leave the social-media platform, adding to their shopping convenience. Few major retailers have stepped into so-called social commerce by selling products directly on social media with a "buy" button.

"What you want to do is cut out the time and friction with transactions," Mr. Medline said after the company reported first-quarter results that beat analysts' estimates. "Look at how busy we all are. Any friction in having to move around, even online, is too much friction, too much time."

The "buy" button is just one of a number of ideas that Canadian Tire is toying with as it moves into new cyber frontiers and invests heavily in improving its digital and e-commerce operations.

Last month, Canadian Tire rolled out a new catalogue, its first in nine years, allowing shoppers to tap into online information from the print catalogue by using the retailer's mobile app to access its website.

The catalogue is having such a big effect on Canadian Tire's e-commerce business that immediately after the launch of the book, the retailer's weekly online sales doubled, Mr. Medline told the company's annual meeting.

On the Facebook front, Sport Chek has been boosting its marketing on that social medium, including its move to digital flyers. Facebook chief operating officer Sheryl Sandberg called out Canadian Tire for its innovative efforts two years ago.

"Our transition to new-world retail through investments in e-commerce, loyalty and digital is helping us to meet the changing needs of our customers," Mr. Medline said.

He added: "Digital disruption is happening on a scale larger than any of us could have imagined, and no industry, including retail, will be immune from those changes."

Amid the changes and investments, Canadian Tire's profit slipped 3 per cent to $85.6-million from $88.3-million a year earlier, while profit per share rose to 90 cents from 88 cents a year ago, when there were more shares outstanding. Analysts had forecast 84 cents in the latest period, according to Thomson Reuters.

Canadian Tire Class "A" shares jumped more than 4.5 per cent to close at $145.37 on the Toronto Stock Exchange. Its shares have soared more than 23 per cent since the beginning of January.

Mr. Medline said in the interview that at first he was skeptical about the idea of an "old-school" print catalogue but after his team told him about the digital concept, "I was blown away."

He said products featured in the catalogue, called the Wow Guide, have performed "extraordinarily" and "created a buzz around Canadian Tire."

He said Canadian Tire stores in the Ottawa area are testing a number of online concepts and "most things we test work. … If you fear failure, then you don't test anything." Still, when it tried to put lockers in stores for e-commerce order pickups, "our customers didn't like it" and the retailer abandoned the idea. Many Canadian Tire products, such as barbecues, don't fit in a locker, he said.

Canadian Tire spokeswoman Susan O'Brien said later that Facebook has become one of Sport Chek's primary advertising partners. "We are constantly working with them to test new strategies including opportunities related to social commerce."

She said the team has discussed a Facebook "buy" button, although a market test isn't imminent. On the mobile front, Sport Chek is working to become a leader in mobile marketing because mobile is so critical in enabling a purchase, she said. 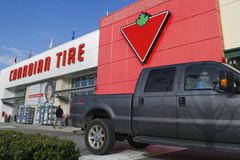 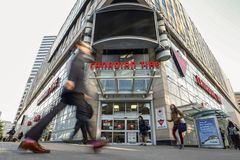