Known for years as a stodgy retailer with little digital savvy, Canadian Tire Corp. Ltd. is rapidly coming of age.

Using its Sport Chek sporting goods chain as a digital testing ground, Canadian Tire – which abandoned e-commerce in 2009 – is now offering about 90 per cent of its products for sale online, following a small pilot that started in November.

In March, Sport Chek, which operates a separate e-commerce site, ran a two-week test, switching entirely to online flyers from its heavily-circulated print advertising flyers. It offered digital promotions on Facebook, a move that was so unusual that it prompted a mention from Sheryl Sandberg, chief operating officer of the social media operator, during the company's quarterly conference call.

"You should be able to get a screw driver or bag of salt delivered to your door as easily as you can order a pizza in 30 minutes – if that's what our customer wants us to do," Mr. Wetmore said on Thursday.

Sprinting to catch up on a number of fronts, Canadian Tire is betting that its fast-growing Sport Chek chain, which was part of the company's acquisition of sporting goods retail leader Forzani Group Ltd. in 2011, will help reinvent its retail business model.

It has teamed up with Communitech, a government funded digital lab in the Kitchener-Waterloo region. The centre was instrumental, for example, in helping Sport Chek's in-house team build a digital community board at its flagship West Edmonton Mall store for $12,000. A previous prototype, built by a third party at one of its Toronto outlets, cost the company $1-million, Duncan Fulton, chief marketing officer at Canadian Tire's FGL sports division, said.

"One important lesson is that when you have the talent in-house, you can do it more quickly and more cheaply," Mr. Fulton said in an interview. "And if digital is going to be a huge strategic advantage for us, you never outsource a strategic differentiator. Instead, you have to grow that capability in-house."

Communitech also helped Canadian Tire build kiosks in stores to help shoppers locate products. The retailer is working with the centre on 10 other, top secret projects, Mr. Fulton said. "You have to be prepared to make mistakes and fail at things."

After some early stumbles, Sport Chek is making progress in its digital evolution. A two-week test that saw it forego traditional flyers in favour of Facebook ads resulted in an in-store sales rise of 12 per cent and sales of the specific items promoted in the circular up 23 per cent from a year earlier, Mr. Fulton told reporters.

The shift to online flyers from traditional print circulars could save the retailer millions of dollars. A growing array of merchants are vowing to reduce their print flyers; Canadian Tire distributes about 11 million weekly.

Sport Chek, which spends about $20-million annually on print flyer advertising, could shave those costs by 20 to 40 per cent by moving to a digital flyer, Mr. Fulton said. It will do more digital tests this year, and if they continue to be successful, Sport Chek will reduce print circulars by 25 per cent in 2015 and scale back "a large majority" of them by 2016, he said.

Mr. Fulton emphasized that parent company Canadian Tire, which spends more than $100-million a year on flyers, isn't close to doing away with them "any time soon … But one day it will be insane to remember the days that we put out 11 million pieces of paper to advertise offers, given where digital is going today."

Sales rose to $2.46-billion from $2.43-billion. Sales at stores open a year or more slipped 0.5 per cent at its Canadian Tire stores, while both its Mark's stores and FGL Sports, which includes Sport Chek and Hockey Experts, saw increases of 2.9 per cent and 6.4 per cent, respectively. 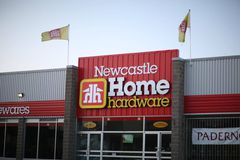