The latest version combines elements of a traditional case study with a so-called "hackathon" that allows for collaboration by computer hardware developers and software designers.

At the first DiploHack recently held in Ottawa (the idea originated in Europe), six teams from Canadian business schools had 48 hours to solve a regional conflict using social media and Big Data.

Unlike a traditional case competition, teams of students, diplomats, military experts and others worked together, as in a startup contest, to imagine how to help innocent civilians caught in the crossfire of war.

A team from Ryerson University's Ted Rogers School of Management, one of three winners at the event, developed a game-like application that teaches those living in a conflict zone how to test the veracity of photos and video shared on social media.

"When we looked at social media in Ukraine, we noticed a lot of people used it for propaganda purposes," says Anatoliy Gruzd, director of the social media lab at Rogers and a member of the Ryerson team. "So the challenge for regular social media users is to figure out what is true and not true."

During the competition, the teams tapped resources and experts from Canada's SecDev Foundation, one of several co-organizers that included the embassy of the Netherlands and the Canadian Department of Foreign Affairs, Trade and Development.

In turn, the experts had exposure to creative ideas generated by students.

"Being able to understand how they are using things [technology] and how they think about things is important," says SecDev spokeswoman Alicia Wanless.

Led by MBA student Nick Lin, the team from Ryerson in Toronto this week started a crowdfunding campaign to raise money for the app, known as Truth Detective.

Mr. Lin, who graduates this year, says that working with teammates from diverse backgrounds, most of whom he had not met before the hackathon, exposed him to the reality of the workplace.

"Coming from an MBA, you know which direction you are going," he says. "But sometimes you miss the bigger picture. With people with very diverse backgrounds you get solutions that are unexpected."

"You are working on a complex problem that you probably would be facing at work and you also have to deliver a specific product," he says. "The same principles apply [as in real life]."

He envisages more such competitions for computer-savvy students to work with experts to deliver practical solutions to pressing global problems.

"This is hacking in a good way," he says. "It was a positive term until it became corrupted and now the hackathon movement is trying to take it back."

With its enviable land, air, rail and water connections, Prince Rupert, B.C., is a hot ticket – one that could get hotter given the lineup of often contentious resource projects proposed for British Columbia's northwest coast. (Last month, one First Nation band rejected an offer of $1.1-billion over 40 years to secure its approval for a liquefied natural gas pipeline.)

Given the economic potential and political tensions in the region, Simon Fraser University's Beedie School of Business has announced a new executive MBA for northwestern B.C. The program, focused on issues tied to the region's extractive resources, will be taught in Prince Rupert.

"Prince Rupert's economy is a key hub of global trade networks," EMBA program director Mark Selman stated in a press release from Vancouver-based SFU. "As the economy changes, opportunities – and the expectations of employees – both increase and become increasingly important."

A student team from the University of Ottawa's Telfer School of Management won top spot at the 2015 Enactus Canada competition and will represent the country at the Enactus World Cup in South Africa this October. Enactus is a student leadership organization that promotes social, environmental and economic progress through entrepreneurial activities.

The Telfer team devised a recycling program that diverted more than 100,000 discarded cigarettes from city streets and raised $73,000 in revenue.

The British Columbia Institute of Technology's school of business has received initial accreditation for 15 programs from the U.S.-based Accreditation Council for Business Schools and Programs.

Completion of the process depends on BCIT addressing several conditions attached to the initial accreditation, including a reassessment every two years to ensure the school meets the terms.

Isabelle Bajeux-Besnainou, the incoming dean of McGill University's Desautels Faculty of Management in Montreal, will take up her duties a few months ahead of schedule in September instead of January of 2016. Currently associate dean of undergraduate programs at George Washington University's school of business in Washington, Dr. Bajeux-Besnainou's appointment was announced last month. 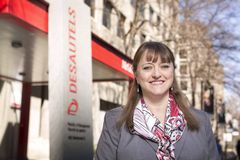