Canada's popularity as a destination for MBA studies took off this year, fuelled in part by anti-immigrant politics in the United States, according to new survey of applications to business schools worldwide.

But Canadian officials warned that the jump in applications reported this month by the Graduate Management Admission Council leaves no room for complacency.

"This is our opportunity," says Niki da Silva, managing director of the full-time MBA program at the University of Toronto's Rotman School of Management, of an almost 30-per-cent rise in international applications over last year. "We have to be anti-Canadian in this moment and really talk about what we are doing. We don't tend to do that but we need to."

Her comments, echoed by officials at other Canadian schools, come in response to a GMAC survey this year of 351 business schools in 40 countries that found graduate business programs in Canada and Europe were twice as likely as those in the United States to report higher applications from abroad. Of 37 Canadian schools in the survey, 77 per cent of MBA programs experienced growth in international applicants compared to 32 per cent in the United States. Even with Brexit woes, two-thirds of schools in Britain recorded overseas applicant growth.

"This is the first time in the past five years that the majority, in fact three-quarters [of Canadian schools in the survey], are saying they are growing international volumes," says Gregg Schoenfeld, director of research for GMAC.

"From a speculative point of view, it seems that the U.S. political climate has essentially driven candidates to Canada."

But Canadian officials say recruitment strategies cannot depend on U.S. President Donald Trump's populist moves against immigration. "[People] want to tell the story that it is all about Trump but I don't think it is all about Trump," says Andrew Gemino, associate director of graduate programs at Simon Fraser University's Beedie School of Business in Vancouver.

Other factors weigh in Canada's favour, he notes, including a competitive currency and federal immigration policies that permit students to stay and work after graduation. International student applications for Beedie's fall 2017 MBA class climbed 20 per cent above last year, with 55 per cent of this year's 53-member class from outside Canada.

Business schools recruit internationally for a diverse mix of students, but Dr. Gemino sees risks in an over-reliance on foreign applications. "We see this [spike in applications] as potentially an aberration and we are worried about it [international students] as a long-term market," he says.

China and India are top recruitment targets for Canadian schools, but Dr. Gemino notes those two countries are building their own business schools. Over time, students from China and India may choose to stay home for their MBA.

"If we are just banking on the fact that we currently have this demand and it builds out a whole new model, we might get stuck with a very low enrolment model in five to 10 years," he warns.

The current application spike has short- and long-term benefits for Canadian schools.

For example, the bigger-than-usual application volume for the incoming class of 350 MBA students this fall gave Rotman officials the luxury of drawing from an even deeper pool of candidates. In turn, the class becomes a potential outlet for word-of-mouth recommendations.

"How do we create 350 ambassadors for the school every year?" asks Ms. da Silva, of the task ahead to turn graduating students into recruitment allies. "Talent brings talent."

Other pacts are in the works with education institutions in China.

"One of our key strategies is internationalization and having a global context," says Dan Shaw, director of Rowe's MBA program, with international students making up about 10 per cent of the class.

Given Atlantic Canada's declining population, international students are seen as crucial to the long-term survival of programs.

At the faculty of business on the Saint John campus of the University of New Brunswick, just four of the current class of 78 full-time students are from Canada. A school recruitment drive in Latin America that began two years ago paid off this fall with half a dozen students from Brazil, Colombia and Ecuador, with even larger numbers expected next year, according to faculty dean Fazley Siddiq.

The school's recruitment strategy is to send top officials for one-on-one contact with prospective students. "We really have to work hard for every student," he says.

American domestic politics may have had some impact on class numbers at UNB Saint John (some international students applied from the United States), but Dr. Siddiq says the one-year length of his faculty's MBA and welcoming immigration policies are draws as well.

"They see our MBA program as a gateway," he says, noting some students are choosing Canada over turmoil at home. Still, like other Canadian deans, he sees danger in resting on past laurels."There is no time for complacency," he says. "You have to be out there year after year." 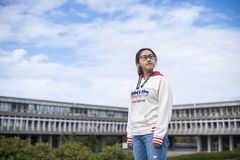 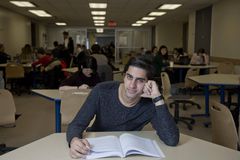 International business students flocking to Canada
June 8, 2017
International students flooding some Canadian B-schools with applications
March 20, 2017
Follow us on Twitter @globe_careers Opens in a new window
Report an error Editorial code of conduct
Due to technical reasons, we have temporarily removed commenting from our articles. We hope to have this fixed soon. Thank you for your patience. If you are looking to give feedback on our new site, please send it along to feedback@globeandmail.com. If you want to write a letter to the editor, please forward to letters@globeandmail.com.
Comments