Jeremiah Brown knows full well the difficulties that can occur when a high-performing athlete attempts to make the transition to the regular world of work.

After winning a silver medal in the men's eights rowing at the London Olympics in 2012, the Hamilton native took a job with Toronto-Dominion Bank, immersing himself in finance, risk and credit. But something was awry.

"Here I was thinking I had these marketable skills and I was set up for success and I was, but getting to that level [in a new career] takes a chunk out of you," the 29-year-old says now. "It really takes a complete effort, everything you have to try and get there, and it left me reeling in a lot of ways."

Mr. Brown, who had previously played as a university football lineman for his hometown McMaster Marauders as he studied commerce, was left to deal with bouts of anxiety and depression as he attempted to adjust to his new life.

"There's this identity shift that has to happen, there's a reeling in of the ego that has to happen after the honeymoon of the Olympics is over," he says. "So I dealt with it just like a lot of athletes deal with it and most athletes in some ways or another deal with this."

Now, as the athlete wellness manager for the Canadian Olympic Committee's Game Plan initiative, Mr. Brown is hoping to help the current crop of Olympic and national team athletes avoid some of the problems he and so many of his peers encountered as they moved away from athletics.

Game Plan, which launched in late September, is the product of a partnership between the COC, the Canadian Paralympic Committee, Sport Canada and the Canadian Olympic and Paralympic Sport Institute Network, and it will be delivered at the seven Canadian Sports Institutes across the country. It encompasses five key elements that will be vital in helping athletes move past their sporting endeavours: education, skill development, networking, health and career management. The Ivey Business School at the University of Western Ontario has also partnered with the program to provide expertise in career development.

"What we do is very different here, so it's not one-off coaching sessions or one-off classroom sessions, it's all an integrated program that follows the students through their development," says Sharon Irwin-Foulon, executive director of career development and corporate recruiting at Ivey in London, Ont.

Ms. Irwin-Foulon says the program will begin with nationwide conferences at the seven Canadian Sports Institutes, beginning this month in Vancouver. That's where Game Plan is being unveiled to athletes, examining things like mental health and personal branding, followed by one-on-one work with Game Plan advisers, who are professional career transition coaches.

"There's two pieces to what we're helping them with – there's the career-specific programmatic stuff, and on the other side we're going to try to help them figure out how to offer education with the university," she says. "So at some point we're looking at exploring what certificate kinds of programs we can offer as a business school."

Ms. Irwin-Foulon has personal experience with top-level athletes given that her goddaughter happens to be 17-year-old Jessie Fleming, a member of the Canadian women's national soccer team, and who will, barring injury, be a part of the squad at next year's Rio Olympics. But while she says that Ms. Fleming already knows that she wants to be an engineer following her playing career, and is currently in school educating herself with that goal in mind, not everyone is as fortunate. Ms. Irwin-Foulon references top-level skiers who spend much of the year globetrotting to wherever there happens to be snow, so a traditional schooling experience is not readily available to them. That's where Game Plan comes in, with the advisers helping out at the seven centres nationwide.

"There was Own the Podium [a program to fund athletes] and this is sort of like Own the Podium 2.0," she says. "What they're trying to do is cut out the noise in the athletes' head so they aren't worrying at the same time that they're competing, that they feel they've got a plan."

But getting athletes to think about their futures long before they cross the finish line for the last time is another key facet of the program.

"We're trying to change the culture of sport in Canada and we're trying to make athletes think about this earlier," says Mr. Brown. "We're working with our sports organizations to do that, we're partnering with Corporate Canada to provide resources and opportunities for athletes in career development and networking in their education."

While he accepts that given Game Plan's fledgling status, there will likely be a trial and error when it comes to education, Mr. Brown says the COC is having discussions with postsecondary schools like Ivey to see what the possibilities are. Things like flexibility around course selection, timing of exams and dealing with professors one-on-one are all things that need to be ironed out. But he also contends that a lot of the hallmarks of top-level athletes – resilience, grit and drive, for example – are often characteristics that can't be taught.

Hopefully for future employers, those qualities prove as enticing as they did for Ivey.

"I'm passionate about talent and these are dedicated, ambitious, driven people and have been excellent at what they've done," Ms. Irwin-Foulon says. "That's a special profile for us to work with, but it's also in line with our brand." 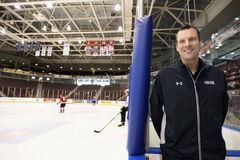