Before moving ahead with a $70-million expansion and renovation of the Sauder School of Business, officials at the University of British Columbia made two key decisions.

One was to stay put rather than move to a "greenfield" site distant from the school's enviable location in the heart of the campus. That meant undergraduate commerce students would continue to have easy access to their science and arts course electives on the main campus.

The other decision was to gut much of the building interior, modernizing classrooms and lecture halls to capture innovations in teaching and learning. The expansion added 55,000 square feet to the 216,000-square-foot building.

The school officially opened earlier this month, marking what outgoing dean Daniel Muzyka describes as "a bit of our renaissance and a renaissance in learning styles."

"We had to have more technology to enable learning and we wanted a larger variety of spaces for different learning styles," says the dean.

For example, traditional classrooms put a lecturer at the front of the room, with students in stadium-style seating. The new classrooms feature tables and chairs, flexibly-arranged, enabling students to work in groups and the professor to move around the classroom.

"If an interesting idea arises in class and students have something to say about it, the professor can have groups of five or six of them get together and have a discussion and then come back for a facilitated conversation," she says.

In its redesign, the school now runs larger classes of first- and second-year accounting in a 260-seat lecture hall equipped with microphones and a big television screen at the front of the room. When students are called on to speak, their faces pop up on the big screen and, with microphones at each desk, they can be heard by others in the class.

Ms. MacDonald says the new technology makes it easier for students to recognize their classmates and, despite initial jitters, gain confidence in public speaking.

Elsewhere, the school reconfigured the library to create private study rooms for group work by students and moved advisory and other services to the front of the building to be more accessible to students.

For their part, students played a significant role in paying for the renovation, contributing $21-million of $52-million raised privately from alumni and donors. The balance of the $70-million makeover came from university reserves and other sources.

By referendum, undergraduate business students agreed to contribute $500 each a year, starting this fall, to a maximum of $2,000 for their four-year commerce degree. MBA and Master of Management students agreed to put up $1500 and $1000 respectively during their studies.

"Students recognized we did not have the facilities we needed," says Jack Leung (cct), president of the Commerce undergraduate student society. "We have world-renowned faculty and very supportive alumni, but we did not have a building that reflected the quality of our students and our education."

In contributing financially, the students had a voice in the design, such as a request for 24-hour access to designated areas of the building. They also can rent the school's ninth-floor penthouse, with its commanding view of the Pacific Ocean, for conferences and competitions.

"It is their home and students feel that," says Mr. Leung.

At the University of Calgary's Haskayne School of Business, a select number of commerce students pursuing their chartered accountant designation will be able to complete their articling on campus, starting in May.

The opportunity for on-campus work experience stems from an agreement between the university and the Institute of Chartered Accountants of Alberta.

Typically, graduates seeking their CA designation can only gain the necessary practical experience at an approved accounting firm. The university now joins several other Alberta companies and institutions selected by the institute as approved training offices.

Under the agreement, the university will train six students – the first selected in May – during a three-year term of work in various university departments that report to the vice-president of finance and services.

In May, the Beedie School of Business at Simon Fraser University will offer a new six-week course for socially-conscious students with an entrepreneurial bent.

The school expects to select about 24 undergraduates – likely a 50-50 split between business students and others on campus – for the "social venture accelerator program."

The for-credit program will provide $500 in seed money to teams of students, who will be judged on their ability to transform an idea (such as training immigrant women or composting restaurant food waste) from concept to reality. 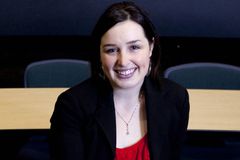