As a mature student juggling the demands of a full-time manager position at Bank of Montreal with those of a two-year executive MBA program at the John Molson School of Business, Stéphane Martel was concerned about having enough gas in the tank.

But since Molson at Concordia University overhauled its program two years ago, introducing such wellness initiatives as the Healthy Executive, there was a ready-made solution to ease Mr. Martel’s worries.

“To be a great leader you need to have the energy because you spend a lot of hours at work and to keep up with the family aspect as well,” he says. “The program is sort of optional so you take as much as you want out of it.”

As an active 38-year-old – he says he habitually goes to the gym four or five times a week and rides his bike to work whenever Montreal’s weather allows – he wasn’t so much concerned with weight loss as just maximizing the nutritional bang for his buck.

So as part of the Healthy Executive module – which he admits helped draw him to enrol at the Montreal school – he met with the program’s nutritionist, Thea Demmers. She examined his eating habits and made a few key recommendations, such as adding carbohydrates to his breakfast, increasing his vegetable intake throughout the day and drinking at least 3.5 litres of water daily. Equally as important, she met with Mr. Martel’s wife, Kim Lambert, who does all the cooking at home and is the person he credits with allowing him to stick with the nutritional guidelines.

The results were almost instantaneous.

“My energy levels after a couple of weeks started going up,” Mr. Martel says. “To have access to a nutrition specialist to really sort of pinpoint what you’re doing wrong and give you suggestions really made a big difference.” 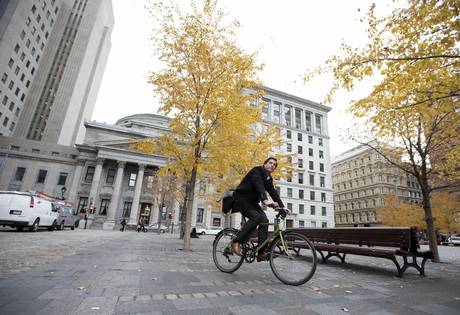 Stéphane Martel was already active when he signed on for Concordia's Healthy Executive program, including riding his bike to work in Montreal, but has found improved improved fitness and energy with adjustments to his diet. (Christinne Muschi for The Globe and Mail)

Jordan LeBel, director of the Molson executive MBA program, says ensuring students stay fit was part of the reasoning for adding the Healthy Executive module. But given that the school is looking to attract the next generation of chief executive officers and vice-presidents, there’s a bigger component at play.

He says the school brings in a number of guest speakers, such as a director of innovation at a company that had quantified the return on investment of a workplace wellness program.

“Should I put in a workplace wellness program in my company and how do I do it?” Mr. LeBel says of the sort of questions that the next generation of business leaders will be asking as a result.

Understanding that education extends beyond the borders of the academic classroom is an idea that has taken hold at other business schools, too. The Smith School of Business at Queen’s University, the ninth-ranked MBA program in the world according to Bloomberg Businessweek, has had its own wellness program in operation for nearly 10 years.

The reason the Kingston-based school put such an emphasis on its Fit to Lead module is two-fold. One is that it really wanted its experiences to extend beyond the four walls of the classroom.

“Second, we really did believe that when our leaders spent some time focusing on their health and wellness they’d be better in class with their focus and concentration and energy levels and hopefully take some of those skills and continue to be better leaders and better managers,” says Ryan Stoness, the program’s manager.

While participation in the program is purely optional, Mr. Stoness estimates that between 80 and 90 per cent of students participate in it, with most students taking part in three to five activities each per week. While the basics of personal training, nutrition coaching, mental skills coaching and lifestyle coaching are all covered, the Fit to Lead program goes a little further with collaborative and invigorating intramural sporting activities, such as kayaking, rock climbing or dodgeball.

The program even tries to break up the monotony of the classroom. “At lunchtime we do what we call no-sweat lunch classes,” Mr. Stoness says, “so people in their business gear would come and spend 10 or 15 minutes with us doing some stretching or meditation.”

It also applies two classroom-based themes, which it calls Fit Tips – really a quick tip of the day on things such as managing stress – and Fit Breaks, a two- or three-minute activity designed to get students on their feet and moving.

Managing stress is also a key component of the Fit to Lead program, so it educates students on how to relax effectively, particularly at the end of the day.

The component entails “learning what a presleep routine could look like,” Mr. Stoness says. “A lot of our clients have a high level of stress and have a hard time letting go of some of that stress, so it’s really the combination of stress management and thinking about how do I get my body to unwind so that it can successfully fall asleep?”

Roxane Ducasse, a 26-year-old Ottawan who moved to Canada from Haiti at a young age, has just a few months left in her MBA at Queen’s. But she admits the Fit to Lead program was a big part of the school’s appeal to her, particularly as most of the activities are tailored to the students. Boot camp, for example, which takes place twice a week in the summer, goes off at 7 a.m. and lasts 40 minutes, allowing enough time for the students to get ready for their first class at 8:30 a.m.

“All the activities they do are around our schedule,” she says. “You [also] know that there is going to be somebody there to work out with you, so that’s something I’ve really appreciated so far.”

Ms. Ducasse has also been a regular participant in the program’s running club and the intramural sports, but with one eye on her preferred future in operations management, she has also embraced a more sedate sport with weekly participation in a golf clinic.

“I’ve gone to that a few times,” she says. “Getting a little bit of the basics of golf will be useful in the long run in case you’re ever invited [to a corporate golf day].”