At this year's World Economic Forum in Davos, Switzerland, among those hobnobbing with A-list influencers was a four-person MBA team from the University of Victoria's Gustavson School of Business.

After winning a sustainability-focused case competition at the forum in January, the Gustavson team attended some high-profile meetings and social events with political leaders and corporate chiefs.

Along with bragging rights, student competitions like the one in Davos (sponsored by Corporate Knights and York University's Schulich School of Business in Toronto) are proving valuable as well as a place to connect top business students and talent-hungry corporate recruiters.

"They [students] have an opportunity to do some fairly serious networking at this event," says Gustavson dean Saul Klein, whose team won in Davos for the second year in a row.

There, team member Bhupinder Dulku met European business leaders, portfolio managers from the United States and others. At one point, he handed his camera to Calgary Mayor Naheed Nenshi for a photo with Prime Minister Justin Trudeau, a forum speaker.

Dr. Klein says the Davos competition on sustainability fits the focus of his school. "To be able to showcase that the students coming out of our programs can do well in this kind of international competition really highlights the importance of what we are doing," he says.

For sponsors, student-run competitions are a place for spotting talent.

"We are looking at the young leaders we want to have come and work for us," says Terri Williams, vice-president of corporate social responsibility for Bank of Nova Scotia, a sponsor of several youth-oriented competitions including those run by Enactus, a student-led organization for social entrepreneurship.

She estimates Scotiabank has hired almost 100 Enactus competitors since 2011.

One is Tyler Baird, a 2013 commerce graduate of Ryerson University's Ted Rogers School of Management and a member of the team that won the national Enactus competition that year for a project in Kenya teaching farmers to keep bees.

"I was able to meet a lot of people from Scotiabank through the competition," says Mr. Baird, who attended bank career information sessions at the Enactus event and met former Dragons' Den panelist and entrepreneur Arlene Dickinson, then a small-business "champion" for the bank.

He joined Scotiabank in 2014 and now works as a small-business adviser at a branch in east-end Toronto. He sees a direct link between his involvement in Enactus and his new career.

"If you are not out there building relationships and meeting with industry leaders, then you are at square one when you graduate," says Mr. Tyler, who tends bees himself outside of banker's hours. "It can be pretty intimidating trying to look for that job."

"Our [corporate] partners are there and actively hire who they need at the event," says Zac Hogg, vice-president corporate and external for CABS. "It is a partnership we try to leverage."

Typically, student teams work for months on presentations, with finalists offering solutions to often-real business problems to a panel of judges, including senior business executives.

"You have all these students who are the best from their schools or the most keen and engaged," says Mr. Hogg.

At Wilfrid Laurier University in Waterloo, Ont., teams from the Lazaridis School of Business and Economics have won top honours at Jeux de Commerce Central for the past seven years.

Associate professor Sofy Carayannopoulos, lead coach for Lazaridis teams in the past two years, says "employers recognize the ability of those to think on their feet and express themselves – skills that now distinguish one student from another."

On the sidelines, corporate sponsors run career information booths and sometimes underwrite postcompetition events as another venue for informal networking.

At last year's JDC Central competition, fourth-year Dalhousie University commerce student Duane Davis used the event to meet some of the corporate sponsors, including Emco Corp., a wholesale distributor of plumbing and other products.

He met Steven Zecchin, a profit centre supervisor at Emco, then responsible for recruiting top candidates to the company's management development program.

"We are looking for leaders and for people who are making a difference already," says Mr. Zecchin, noting the competition is also a way to raise Emco's profile with students.

"The great value of the competition is that there is opportunity everywhere for employment," he says. "You are there showing yourself after months and months of preparation and skill development to really impress a number of employers."

Last year, after his Gustavson team won $6,000 for its first-place finish for the sustainability competition in Davos, MBA student Jesal Shah interviewed for a job with the government of British Columbia.

"I got to talk about the [Davos] experience in the interview," he says. "They were very impressed with that background and pedigree."

Looking back, he says, "You are not getting the full business school experience unless you do these competitions. You are selling yourself short."

How we won The Economist’s global case competition
April 5, 2016 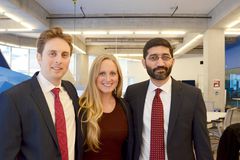 How we hit a home run at baseball case competition
May 19, 2015
How we won a business case competition in our very first try
April 10, 2015
Follow us on Twitter @globeandmail Opens in a new window
Report an error Editorial code of conduct
Due to technical reasons, we have temporarily removed commenting from our articles. We hope to have this fixed soon. Thank you for your patience. If you are looking to give feedback on our new site, please send it along to feedback@globeandmail.com. If you want to write a letter to the editor, please forward to letters@globeandmail.com.
Comments