Some Australian business schools are offering no-cost or low-cost MBAs to eligible women in an effort to boost the country's female representation in business programs – and, eventually, executive level positions.

But could Canadian business schools learn something from this initiative?

"I think so," says Christina Paylan, an MBA student at Concordia University's John Molson School of Business in Montreal and former president of the school's Women in Business Club.

"It would be more appealing and get more women interested in doing their MBA because the return on the investment is often not the same for women," she explains, referring to the glass ceiling for female executives who are not paid the same as their male colleagues despite the same positions and education.

This has a direct impact on how potential MBA candidates look at taking on this program, Ms. Paylan says. "Some women are thinking, I'm paying the same price and I'm not getting the same opportunities and outcome in the end so why should I do it?"

But the Macquarie Graduate School of Management (MGSM) is one Australian school that decided the financial burden shouldn't be a barrier.

Ranked the country's leading business school by the Financial Times, the Sydney-based facility says its new Women in MBA program will pay out $4-million (Australian) – the equivalent of $3.8-million – to provide 100 women the opportunity to get their MBA free (or almost). The school is looking to get another $4-million from industry to support the venture.

MGSM dean Alex Frino told the Australian Financial Review newspaper that this move is "crucial," adding his school has set a goal to become the first top 50-rated business school in the world to achieve gender balance.

So far, about 20 women are confirmed for the program from companies that include airline giant Qantas, Johnson & Johnson, Canon and the Royal Australian Navy.

Zeger Degraeve, dean at the Melbourne Business School, says he believes the financial challenges faced by women are a serious, but fixable, obstacle. The percentage of women in his MBA program sits at 33 per cent, but Dr. Degraeve, like MGSM, would like to see this grow to 50 per cent.

"It's reducing the barrier… because those women already have family commitments and they usually have young families with certain financial demands like mortgages, so facilitating our programs and actually making the financial challenges better will be a huge help," he says.

Dr. Degraeve acknowledges his school doesn't offer free MBAs, but there are some low-cost options already in place to help with the financial burden. He says he is open to more.

"For instance, in our senior executive MBA program we have the dean's scholarship for women and it's a $50,000 scholarship, so it's almost a full fees scholarship," says Dr. Degraeve. "In our other MBA programs, about 33 per cent of the scholarships are awarded to female candidates."

In Canada, Queen's School of Business in Kingston recently announced two scholarships for women in its EMBA and EMBA Americas programs for 50 per cent of tuition, $95,000 and $129,800, respectively.

There were already four $30,000 scholarships in place for women entering the $77,000 full-time MBA program. The scholarships are funded through the Forté Foundation, a consortium of top companies and North American business schools that supports the development of future female leaders.

"I think these initiatives are fantastic and we're always trying to promote business education for women through our sponsorships and through other initiatives," says Teresa Pires, assistant director of recruitment and admissions at Queen's.

Ms. Pires says the objective is to get the number of women enrolled in the program up to a stable 35 per cent. It's an attainable goal, she says, as the graduating class of 2015 is 42 per cent women (but has dropped to 32 per cent for next year's cohort).

There is the risk, however, of looking at these scholarships through too narrow a lens, as programs such as MGSM focus on the number of women in the program.

"It's something to grapple with, what is the right number?" asks Sharon Irwin-Foulon, executive director of career management and corporate recruiting at the University of Western Ontario's Ivey Business School in London, Ont.

Ivey has five scholarships for women in its MBA program, with one in particular – the TD Bank Financial Group Women in Management Award – valued at $40,000, almost half the program's $82,000 tuition.

Ms. Irwin-Foulon says she is in favour of getting more women into MBA programs and executive positions as a whole, but worries there might be too much focus on the number of women instead of making sure the opportunities are out there for the most valuable candidates.

"Certainly we give lots of scholarships and I think it's in every university's best interest to nurture and bring women in, but I think where I'm getting nervous … is bringing women in just for the sake of having a bigger number," she says.

If the focus remains on the candidate's quality, she adds, then the numbers will simply happen organically.

"We run the risk that if we don't admit the right people, they won't flourish and thrive in the program and then don't do well in the market." 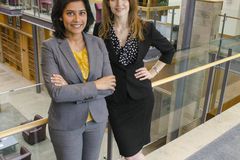