A self-described serial entrepreneur, he has managed to launch a steady stream of diverse and successful businesses, from gaming software to bottled spring water, by letting his creative juices move in different directions at once.

“I like disrupting existing industries with innovation,” says the 41-year-old, whose latest venture, the aptly named Flow, is a naturally alkaline water with a high pH level sourced from his family’s 25-acre property in Mildmay, Ont., 45 minutes southwest of Owen Sound.

“When I see a gap in the marketplace and know I can make a change, I am quick to rush in.”

A quietly intense man, Mr. Reichenbach sits perched at the edge of a chair in Flow’s Toronto office in the Liberty Village neighbourhood, dressed in a blue suit and tan leather shoes without socks. His cropped hair is white and his smile genuine.

“I’m driven by passion,” he continues. “I like to be part of creating things first and foremost. Some people like jumping off buildings or working out. My flow is starting companies and seeing my ideas grow into something tangible.” 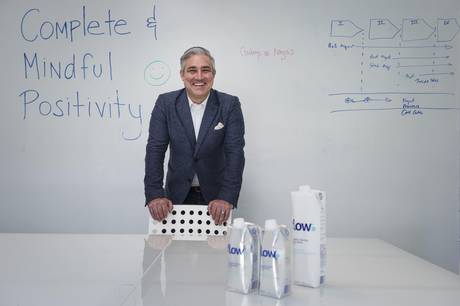 The second born son of the businessman-lawyer who helped found the Formosa Springs water company in the 1980s, Mr. Reichenbach was just a boy when he realized he liked being his own boss.

He started delivering newspapers at 11 and by 13 was managing his own team after consolidating his rural community’s paper routes. When he was 16 he opened Rave New World, a beachwear clothing store with an in-house DJ that catered to vacationers in the Ontario coastal towns of Port Elgin and Southampton. At 18, he turned to concert promotion, busing kids from his rural area to attend electronic music shows two hours away in Toronto. Around the same time, Mr. Reichenbach started holding parties in bars charging a cover that patrons were only to happy to pay as he delivered on a good time.

And then this teen entrepreneur thought to get serious, in a manner of speaking.

In 1995, at the age of 20, Mr. Reichenbach enrolled in Fanshawe College’s business marketing and administration program in London, Ont., but he didn’t last long because “I had started making money,” he says, laughing.

His concert promotion business had picked up momentum, and in the commercial world existing outside academe, Mr. Reichenbach had graduated from bars to booking arenas and opening his own nightclubs. Among them was Atomic, the Ottawa dance music club which Mr. Reichenbach ran until he was 28, launching the careers of many a DJ.

While in Ottawa, Mr. Reichenbach transferred his Fanshawe credits to Algonquin College, where he earned an advanced diploma in international commerce in 2000. A year later, he relocated overseas to London, where he used his contacts in the music industry to launch one of the world’s first ringtone publishing companies. Reaching a point where formal training would better help him realize more of his entrepreneurial dreams, he signed up for the MBA program at the University of Liverpool, graduating in 2005.

“I was curious to understand how a large organization worked,” explains Mr. Reichenbach, who now lives full-time in New York with his creative director wife Tammy Eckenswiller. “What were the details and the mechanics needed for operating one?”

Mr. Reichenbach didn’t lose much time finding out. Since obtaining his MBA, he has launched another four businesses and counting.

They include Flow, the first bottled water in North America to be packaged in a recyclable Tetra Pak box; Rabbit, a video chatting platform that lets users connect with limitless numbers of people; Magmic, a mobile publisher and developer of games and entertainment; and Guest Driven, a new hotel software tool to be used for mobile check-ins.

“What I learned from my degree and that has proven to be very useful is scalability. An MBA teaches how to scale everything, from human resources to accounting. I found that invaluable,” Mr. Reichenbach says.

“It’s one thing to build a company from one to 50 employees and quite another to take it from 50 to 5,000. I wanted to know how that could be done.”

According to Mary Kilfoil, an assistant professor at Dalhousie University’s Rowe School of Business in Halifax who teaches courses in entrepreneurship, economics and innovation, serial entrepreneurs like Mr. Reichenbach are “opportunity creators, ... people who can spot an opportunity and who have the skills and talent to act on it before moving on to the next one.”

Recognizing opportunity sparks innovation in business, and it is why business schools like hers are focused on creating the innovators of tomorrow.

“People have previously tended to silo things and think of the business school as grooming people for managerial positions with banks and top companies. But that’s a narrow definition,” Dr. Kilfoil says.

“There’s a renaissance around innovation and entrepreneurship right now and it’s about producing individuals who have the knowledge to figure out if an idea has traction. Does it address a need? If not, move onto the next idea.”

Similarly, Alexander Kalil, a former portfolio manager in his 70s who teaches at McGill University’s Desautels Faculty of Management in Montreal, encourages MBA students to take an open-minded approach to business creation.

“All entrepreneurs can be painted with the same brush,” Prof. Kalil says. “To achieve success they do what they love to do and have a career and not just a job, and when a good entrepreneur sees a good opportunity, he or she seizes it to pursue it.”

Mr. Reichenbach is that good entrepreneur.

“What inspires me?” he asks rhetorically. “When I see a gap where strong consumer interest is being underaddressed by a corporate culture with an unwillingness to change, I’m right in there.”