As companies have downsized and stripped out layers of management, promotions in organizations have became fewer and farther between. To get ahead, people are increasingly looking to hop to another employer for more opportunity. A Globe and Mail online survey this week found that 49 per cent of 5,797 respondents said they are looking for a new job this year.

In the United States, 60 per cent of employees surveyed by staffing service Right Management Inc. said they intend to look for opportunities with another employer this year. And a separate Right survey found that 54 per cent of 558 organizations have already seen top talent leave for other jobs in the first half of this year.

Executives are hopping to new jobs with increasing frequency. A recent survey by networking organization ExecuNet found that executives now stay with an organization for only 2.8 years on average before moving on, down from 3.3 years in 2006.

A mercenary approach to jobs as stepping stones may actually slow executives' progress to the top, according to a new analysis by Monika Hamori, a professor at the IE Business School in Madrid that appears in the July Harvard Business Review:

Finding: Footloose executives are not more upwardly mobile than their single-company colleagues, according to Prof. Hamori's analysis of the career paths of 1,001 chief executive officers in Europe and the United States. The average number of jobs the CEOs held before their big promotion was three, and they reached the top an average of 23.1 years after starting their career. But for every extra job above three in the résumés of job hoppers, advancement to the top took as much as an extra year longer than that average. Executives who had worked for six separate employers, for example, took 26.75 years to reach the CEO level.

Lesson: In interviews she did with more than 20 executive recruiters, Prof. Hamori was told that employers look for a track record that includes long stints - at least five years and ideally closer to 10 - with each employer, that include internal promotions. "Recruiters say this indicates an executive who works well and is valued by employers," she said.

2. Fast ascent may not be the best ascent

Finding: Executives who moved up the quickest earliest in their career reached a ceiling that delayed their next move because they became too specialized, the study found. Only 40 per cent of executives who changed jobs on their way to the top consistently moved up to a bigger company or job title. Another 40 per cent took lateral moves and 20 per cent moved to roles with a lesser title, narrower responsibility or to a smaller company.

Finding: Sixty-four per cent of the executives who started their careers with Fortune 500 companies later moved to smaller firms, the study found. Many reported they felt that they got promotions faster in the smaller organizations because of their earlier track record at a big, well-known company.

Lesson: It's a good strategy to join a well-known company early in your career because future employers will assume that if you can make it in the big pond, you are qualified to swim in both big and little ponds.

Finding: Those who switched from one industry or specialty to another weren't any less likely to continue to advance in their careers, the study found, with 29 per cent of the executives having made at least one jump to a completely different industry, and another 23 per cent shifting to a markedly different job function in their industry.

Lesson: Be strategic. If there are limited opportunities to rise in your specialty, look for other careers that will value your skills and expertise.

Career moves: After taking a new job in March, 2008, he left after four months because his manager moved to a new company and took him along to become director of customer management. That job lasted only a year before a downsizing and a severance put him out of work in July, 2009. Previously, he had held three other jobs, two for nine years and one for seven.

Major issue encountered in job hunt: Any position that lasts less than three years raises red flags, he found. He said hiring managers asked him: "If you left them after four months, what is to stop you from leaving us in four months?"

How he answered: "I turned what might have been negatives into positives," he said. For example, about the four-month job: "I said it was a unique situation. I was very happy with the job and they treated me well and in fact I was doing things so well that the manager took me with him."

Keep it short: In interviews with potential employers about the short stints, he has learned to keep things concise. "I spoke positively about the employers and said the jobs were valuable experiences. Anything I would say beyond that would potentially raise further questions. As long as they get a satisfactory answer, they will accept it and move on."

Insight: "I think organizations now accept the fact that it can take time to get traction and some jobs don't work out. But it better not happen often."

HOW HOPPING CAN HELP

Hopping is broadening: A variety of successful roles translates into broader skills and experiences that can make you more employable.

It highlights flexibility: If you have experience only in one role or organization, employers may question your flexibility and enthusiasm for change and growth.

Short may be a trend: More employers are hiring on short-term contracts and may be looking for someone who doesn't expect loyalty.

It broadens your reach: Experiences in different organizations will expand your network and industry insights.

Perks can be greener: Competitors looking to fill a gap with your skills may be willing to pay you a lot more than your current employer.

It can speed growth: Upward mobility these days often means going from a large, mature company to a smaller, entrepreneurial one.

It can avoid a dead end :The recession has highlighted a reality that some industries are stagnating. Survival depends on looking for growth opportunities.

You can dodge a bullet: If your industry is facing layoffs, moving voluntarily looks better on a résumé than a long stint of joblessness.

HOW TO HOP GRACEFULLY

Resign with thanks: Tell your employer, in writing, how much you enjoyed working there but you've received an offer you just can't refuse

Smooth the transition: Stay long enough to help transfer your responsibilities, and do it with a smile, not a smirk, on your face.

Don't burn bridges: Avoid the temptation to be critical of others in the exit interview.

Provide adequate notice: Future potential employers will check back to make sure you didn't leave a mess behind in previous jobs.

Update your status: Post an explanation of your move on industry association and social media websites to inform your network of positive reasons you left, and quell any potential rumours about the change.

HOW TO PLAY DOWN SHORT-TERM ROLES

Don't list blips: If a job lasted only a month or two and was not related to your career, you may choose to leave it off your résumé. But don't cover it up if asked about it.

Group them together: Create a heading on your résumé such as "contract assignments" or "projects" or "consulting."

Human resources consultancy Right Management Inc. asked 1,308 Canadians and Americans why they changed jobs in the past year. (The numbers add up to more than 100 per cent because people had more than one reason.)

Percentage who switched because of downsizing or restructuring.

Percentage who moved for new challenges.

Percentage who changed because of poor relationship with a manager.

Percentage who said their contributions to the company were not valued.

Percentage who left for better compensation and benefits.

Percentage of executives identified by their companies as having high potential who said in June that they are planning to leave their employers by this time next year.

Percentage who planned to jump ship in a similar 2006 survey

Percentage of high-potential employees who consider themselves "highly disengaged" in their current job.

Average number of employers that U.S. chief executive officers have had in their careers.

Percentage of CEOs in the United States who stayed with the same employer throughout their careers.

Percentage of "lifer" CEOs in Europe.

Sources: June survey of 20,000 employees in 100 organizations by the Corporate Executive Board; study of 1,001 CEOs by Monika Hamori, professor of human resource management at the IE business School

Employers are increasingly viewing a job applicant's work history with more than five employers as a red flag, said Jeffrey Flaum, managing partner of Denver-based organizational consultancy Green Peak Partners. That conclusion is based on interviews with hiring managers of 55 companies and a study of the 72 chief executive officers and presidents that they hired over the last five years.

The study, released in June, looked at the average job length for these top executives who received the highest rankings from employers on their potential to be able to manage people and achieve solid financial performance. Those ranked highest had job histories that included tenures of at least six years and the best scores were for people with nine years or more with the same organization. None of the executives with no long-term jobs or more than seven different employers were ranked higher than three, on a five-point scale.

"Executives who change jobs frequently are seen as trying to outrun a problem and that problem often has to do with a lack of fit in the organization," Mr. Flaum said. "Job hoppers are also seen as lacking perspective in the results of their leadership decisions because they will typically leave before the changes take effect."

Employers are leery about seeing a record of tenures of less than three years, he added, "because they say they're going to come here and they may be great, but they will probably leave and leave problems in their wake." 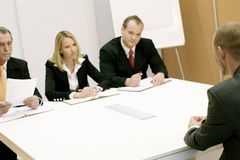 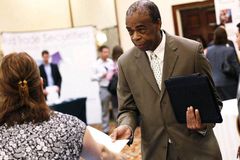 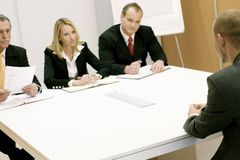