While most women and men say they believe in equality between the sexes, a significant proportion of those polled in recent years say they don't identify themselves as feminists, considering the term dated and freighted with negative connotations.

A perfect example of such thinking surfaced late last year when Time Magazine included the word "feminist" in a list of terms that should be banished in 2015, in what I can only hope was an item written by a misguided intern who was promptly dismissed. The magazine later apologized.

My own brand of feminism often centres on giving women equal opportunities in business and access to capital. I've often called this business feminism, but others have called it executive feminism or financial feminism. In other words, we're talking about women and money.

You might not realize it, but women and money are a hot topic. At last month's Oscar ceremonies, Patricia Arquette took the opportunity during her acceptance speech for best supporting actress to demand equal pay for women. Compare that with Amy Pascal, the former co-chairman of Sony Pictures Entertainment, who admitted in an interview with Tina Brown in February that she paid women less because they settled for less and she was running a business.

"People want to work for less money, I'll pay them less money. I don't call them up and go, can I give you some more?" she said at recent Women in the World Conference in San Francisco. She later chastised women for being too grateful for their jobs, telling them to walk away when they are offered less pay. Naturally, this assumes that women know how much their male colleagues earn in the first place.

For years, politicians, experts and pundits have said that putting more money in the hands of women is good for business and the economy. A new report from the International Monetary Fund found that countries could increase their gross domestic product by as much as 30 per cent if only they allowed for greater participation of women in the work force.

Activists pushing for women's economic empowerment see this trend in action. Just ask Shahnaz Taplin Chinoy, the San Francisco-based founder of the charity Invest in Muslim Women. When she gives underprivileged women in Lucknow, India, the opportunity to learn embroidery skills, their earnings increase fivefold in three months and she notes that they often use their extra pay to send their daughters to school.

In other words, in Third World countries or in our backyards, it pays to invest in women. So when the latest research paper by Barbara Stewart a partner and portfolio manager at Cumberland Private Wealth Management, came to the conclusion that we will all be "business feminists" soon, I needed to take a closer look.

"Smart women are the next big thing and everyone knows it," Ms. Stewart wrote in this year's piece entitled The Future of Work and Finance, to be published on International Women's Day, March 8 . She contends that though feminism has taken a hit in recent years, it will make a comeback as a business issue.

She came to this conclusion by interviewing 50 successful professionals, both male and women across the globe, many of whom are beginning to realize that including women makes smart business sense.

She relates a conversation with Hakan Nyberg, the CEO of Nordnet, a Scandinavian Internet bank. Mr. Nyberg told her that he didn't give much thought to the company's private banking brochure until he received an angry e-mail from a top client, who happens to be a 64-year-old woman, with the subject line "What were you thinking?" Mr. Nyberg took a closer look at the glossy brochure and noticed it contained photographs of nine good-looking men, all around 35 years of age, and not a single woman. In his estimation, this was not a good business move.

Being a feminist in business today isn't about doing the right thing or the just thing, Ms. Stewart said. She sees businesses embracing feminism because it helps in the search for talent and understanding customers. "It might even result in higher share prices," she added.

In other words, companies who embrace business feminism have a competitive advantage, since women are not only earning more money than before but, according to Ms. Stewart, are becoming more financially confident. Savvy financial services companies, she observed, are fine-tuning their marketing approach, moving away from ads that talk down to women, demonstrating how "shopping for stocks is just like buying tomatoes," she quipped.

Ultimately, the economic advancement of women is not only good for business, but good for the economy. In the simplest terms, if it can make us all richer, it may be time for holdouts among us to give the big bad F word a second chance.

Some mobile workers more equal than others
February 27, 2015 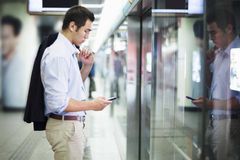