Prime Minister Justin Trudeau recently shuffled his cabinet and, say what you will about his choices, there is one thing I couldn't help noticing: What's with all the hugging?

While the Prime Minister's penchant for hugs is no secret – Maclean's magazine counted 22 hugs and 32 kisses when his first cabinet was sworn in – I can't help but wonder when, and if, we hug too much in professional settings.

I worry since I am also a hugger. Sure, I shake people's hands when I meet them, but, after knowing someone for a while and developing a rapport, my instinct is to give most people a hug. In my mind, it breaks the ice professionally and brings authenticity to new relationships.

However, not everyone agrees on hugging and entering into close contact with individuals we work with can be tricky. The key to navigating hugs at work, according to Mark Bowden, a Toronto-based expert in body language and human behaviour, comes down to being clued into the company's culture, or "tribe."

"There are small groups that we fit into, our tribal groups, that follow the same norms even within a broader culture. So, we need to look at the profession and then the sub-tribes in that profession," he explained. For example, there may be someone in a very specific role at a bank that hugs, but another person, with the same job description, at another bank, may not be open to hugs.

Hugging also means different things to different people. That proximity may be friendly to some, but come across as overly controlling to others.

While there is no easy way to navigate the decision to hug professionally, he recommends watching "the tribe" and seeing how they perform. If you observe many hugs, then you can decide if that's right for you. Keep in mind that if you don't like hugging, entering into that hugging tribe and deciding not to partake turns you into a social pariah who doesn't conform.

If you are on the other side of the hugging spectrum and aren't sure if your hugs will be appreciated, Mr. Bowden recommends seeking permission by saying, for example, "I like to hug. Is it okay to hug you?"

While that question remains uncomfortable for many – since it opens up the door for someone to say "no" – asking consent to hug is already being taught in schools.

"My kids, 11 and 7, are told at school that if they want to give someone a hug … what they are being educated around is asking permission before giving that level of physical contact," he said.

Another option for huggers is keeping an eye open for "gateway gestures" that would lead you to believe that hugging is okay, for example, or just pats on the back or shoulders.

In other words, observe and take things slowly because "if you rush into that hug, it's difficult to stop when it's started," Mr. Bowden observed.

While we don't know the motivation behind Mr. Trudeau's decision to hug his entire cabinet – it could mean he's inviting them into a "family" or bringing them under his command – it appears that Canadians, as a tribe, may be more into hugging than other nationalities.

"I've been in Canada for 11 years and I'm always surprised by the amount of hugging that goes on. Canada is a very warm, inviting place, so I would generally expect to see plenty of hugging in Canada," Mr. Bowden said.

It's a sentiment shared by Richard King, a Vancouver-based recruiter who often visits U.S. workplaces, who likes to hug, but also acknowledges that it can be fraught with human resource issues.

"The past six years of working for U.S.-based companies taught me a lot about being Canadian," Mr. King, who works from home in Vancouver, said.

"Whenever I visit the studio in the U.S., I gave and received lots and lots of hugs. During one such visit, an HR manager took me aside and said, 'Richard, no one hugs at work but for some reason when the Canadians come for a visit, it's a big hug fest,'" he said.

However, Mr. King said he's conscious of how easily hugging can get out of hand and worries how much is too much? His rule of thumb is to hug upon arrival and then again when it's time to say good-bye.

So unless you are very astute in determining the values of your "tribe," be cautious with your business hugs. If you get the sense that it was a mistake, you can always follow up with, "Sorry, I'm Canadian. We tend to hug. Just look at our Prime Minister."

Empowering women in the workplace by excluding men
January 21, 2017
How will we define ourselves in a ‘post-jobs’ society?
January 7, 2017 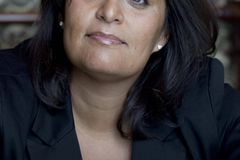 Will skills and title matter as much in the future of work?
December 10, 2016
Follow Leah Eichler on Twitter @LeahEichler
Report an error Editorial code of conduct
Due to technical reasons, we have temporarily removed commenting from our articles. We hope to have this fixed soon. Thank you for your patience. If you are looking to give feedback on our new site, please send it along to feedback@globeandmail.com. If you want to write a letter to the editor, please forward to letters@globeandmail.com.
Comments