Who is better at networking – men or women? An executive recruiter posed this question to her audience, at a speech I attended, after she described what she said were two typical gender-related scenarios.

The recruiter said the man was more effective because he connected with more people. But if networking is about leaving a lasting impression, how much do you think someone is going to be remembered after a slap on the back, and a short "Hey, how are ya – good to see ya" encounter?

The two scenarios do, however, illustrate an important difference in the way men and women approach networking. Research shows that men do have larger business networks, and interact with them differently than women do with theirs.

A female friend's recent experience at a conference with Fortune 500 executives reflects this. The men handed out a lot of business cards and added their LinkedIn connections, but at the end of the conference, they probably knew little more about each other than "their job title, likely inflated, and the size of their budget and value of their stock options, also likely inflated," my friend said.

In contrast, my friend said that before she and another woman had even exchanged names, they had swapped pointers on where to shop to how to manage the work/kids juggernaut.

Networking observers say that for men, networking is largely about selling themselves or a product, or trading information. They want their conversation to lead to a tangible result, such as a business lead, a sale or an introduction. They get straight to the point.

Women, on the other hand, will often initiate an exchange with a pleasantry or a compliment ("Love your shoes") and, like my friend, will converse on a range of subjects, regardless of potential professional benefits. Rather than thinking quid pro quo, they think "How can I help her? How can I connect?" One networking commentator on LinkedIn put the difference succinctly: Men "start with a statement of their status ... Women create community."

Another key difference is that women use networks for what psychologists call "social comparison," a process by which we understand ourselves and learn how to behave by comparing our attitudes and behaviours with those of others. This leads to lots of questions ("How did you handle that boss who hated you?" or "What did you do when your teenager was skipping school?"). But the greater tendency among women to compare themselves against others can be a double-edged sword. While it provides valuable social support and information, it often leads women to underestimate themselves, and to see themselves as wanting, especially in relation to men.

As one woman who recently attended a networking event for senior women said to me: "All they did was complain about the old boys' network and how they needed to learn how to network." In fact, the women were networking: They were connecting, gaining social support and learning they weren't alone in their feelings. Unfortunately, they were evaluating their activities through a male lens, and denigrating their own strengths. They were also missing an opportunity to leverage their networking into something more productive than a collective estrogen whine.

Sadly, women often don't take advantage of their ability to connect. Here's where they can take a lesson from the guys. Whereas men talk matter-of-factly about their accomplishments, women tend to undersell themselves lest they be seen as boastful. Or where a man might bluntly ask, "Could you please introduce me to ... ?" women are so nuanced about asking for assistance that a person whose help they seek might not even realize a request has been made.

Equally disturbing is the number of women attending networking events who say, "I feel so guilty coming." Can you imagine a man making a similar comment about a professional development experience? Women also often leave immediately after the event. Maybe they worry that they are being self-indulgent in taking time away from work or will be perceived as less committed to their job.

To women, I say, forget the guilt. You are at a disadvantage. It's not only about having the skills to network; you also need time and avenues. Women still carry a disproportionate burden (of housework and child and elder care responsibilities), leaving men with more time to develop relationships on evenings and weekends, for example by playing golf or attending sport events.

Men also have more time for what American researchers Monica Forret and Thomas Dougherty found in a landmark study to be two of the most powerful networking strategies: increasing their profile inside their organization, and participating in extracurricular professional development.

Interestingly, the researchers found that these strategies influenced career advancement more for men than women. The likely explanation is that women had less time to engage in extracurricular activities or pitch themselves for time-consuming, visibility-enhancing assignments. The researchers also speculated that external networking was more effective for men because they had access to more powerful people to network with. So women, take advantage of your networking opportunities. Speak up. Reach out. My research shows that supporting other women's careers is one of the greatest sources of satisfaction for women at midlife. 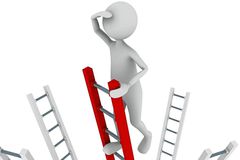