Mark Cutifani and I meet in the strangest places. My first encounter with the CEO of Anglo American, one of the world's biggest mining companies, came last September at a Vatican mining conference in Rome. He and other mining bosses were learning how to inject a bit more of the Holy Spirit into their digging activities.

The second time was two months later at a gold mine in Chelopech, Bulgaria, of all places. The little mine wasn't Anglo's. It belonged to Toronto's Dundee Precious Metals and Mr. Cutifani was there to learn how the Canadians had reduced costs by some 50 per cent through a range of technologies, such as novel underground WiFi and data networks. "This is where the innovations are, in the small mines," he said at the time, decrying the lack of technology in Anglo's own mines.

The third meeting came in March, at Anglo's headquarters in London, near Trafalgar Square, at the heart of what used to be world's greatest empire. The location is appropriate. Anglo American was founded in 1917 by Sir Ernest Oppenheimer with £1-million ($1.85-million) in capital from British and American sources (hence the name Anglo American). Like Britain, it would establish outposts around the world. From its foundation in South Africa – home to its vast gold, platinum and diamond operations – it would expand into base metals in Canada, coal and manganese in Australia and iron ore, ferronickel and copper in Latin America. At one point, Anglo was the world's mightiest mining company.

That's no longer the case. It now has the dubious distinction of being the smallest of the Big Five global mining groups – the leaders are BHP Billiton, Vale, Rio Tinto and Glencore Xstrata – and did its best to alienate investors in recent years through massive cost overruns, uninspiring leadership, mediocre engineering and a labour dispute in its South African platinum mines which has yet to be resolved. In 2009, Xstrata (before its merger with Glencore) took pity and offered to buy the ailing company. Anglo's then CEO, Cynthia Carroll, rejected the overture, vowing to restore the company's fortunes.

The effort failed. As the shares tumbled, Ms. Carroll, who was the first female CEO in the company's history, and the first outsider, resigned. In came another outsider, Mark Cutifani, an Australian by way of Sudbury, Ont., and South Africa, with a licence from the board of directors to shake up the place. That was a year ago. Today, the new focus is on boring but worthy pursuits, like capital discipline and shareholder value, not the fun but destructive activities like growth for the sake of growth. "We were forcing growth through the system and that's partly how we got into trouble," Mr. Cutifani says.

We are having breakfast in the dining room on the main floor of Anglo's offices, just beyond the lobby, whose display cases are full of colourful minerals, old photos and curiosities such as a life-size lioness cast in silver-coloured alloy. Breakfast is, sadly, rather bland. When I worked in the mining camps in Ontario to fund my university years, we gorged on eggs, bacon and sausages for breakfast, and I had assumed the canteen at Anglo would serve up similarly robust fare. Instead, it was yogurt, toast and croissants. At least the coffee was in the mining spirit – it was bad.

Mr. Cutifani, 55, the father of seven children from two marriages, is a good talker, amiable and, like another mining Aussie, Rio Tinto CEO Sam Walsh, speaks his mind. Unlike the polished Mr. Walsh, Mr. Cutifani could be a miner from Central Casting. He is fairly short, but with a crew cut and a stocky build. He looks like he could thump a man half his age; he loves Led Zeppelin and is a sports nut who leans toward Aussie Rules football and other exertions near the more violent end of the athletic curve. He discovered winter sports when he worked for Vale Canada (formerly Inco) in Sudbury in the middle part of the last decade. "I love all sports," he says. "My kids played hockey in Sudbury and we used to go see the Sudbury Wolves [hockey team] play."

When we met in late March, he was limping slightly. The decades of hard sports had finally caught up with him and he underwent surgery on his left hip in January, though he expected to be running again in a couple of months.

Unlike many mining bosses, Mr. Cutifani knows mines from the bottom up. The son of working-class parents – an Italian father, who was a crane operator for most of his career, and an Irish mother, whose family worked in pubs – cruising through school without a job was not an option.

He worked his way through university in the coal mines near his hometown of Wollongong, about 80 kilometres south of Sydney, and did so again after graduating with a mining engineering degree.

He then swapped coal for gold, rose into leadership roles and, by his mid-30s was landing big jobs, including one he his happy not to highlight on his résumé. The position was managing director of Sons of Gwalia, one of Australia's largest gold producers. Gwalia suffered from price hedges that had been assembled before Mr. Cutifani's arrival. A misguided acquisition under his reign did not help. As the losses mounted in 2003, he resigned and the company collapsed a year later.

By then Mr. Cutifani was far, far away, in Canada, working for the Inco division of Brazil's Vale and, oddly, loving his new life in the frozen north. "Within three months of moving to Toronto they sent me to Sudbury," he said. "I came back and told them I think I can take 30 per cent out of the costs. So they told me to go work in Sudbury. At the end of six months, my wife [Luana] decided to have a look at Sudbury and she loved it. We loved the lakes, the lifestyle, the friendships. She didn't want to leave."

Mr. Cutifani hit the big time in 2007, when he switched hemispheres again, this time to become CEO of AngloGold Ashanti, one of South Africa's largest gold producers (and once part of Anglo American). Mining in South Africa is not like mining anywhere else, he learned. "You have to be sensitive to history, to apartheid," he said. "People were removed from their houses because of the colour of their skin. The starting point for conversations is very difficult and it starts with fundamental mistrust. You have to work very hard to build a link and the basis of trust and it takes time. You have to give more of yourself to demonstrate you are who you are before you can move into a constructive conversation."

Last year was a good time to be available for a CEO's job in the mining industry. After many billions of dollars of writedowns on acquisitions and projects launched at the top of the market, the big spenders knew their time was up and the head hunters swung into action. Mr. Cutifani was scouted for a few top jobs and chose Anglo, the weakest of the biggies and the one with the least room to manoeuvre, thanks to its heavy exposure to South Africa and its delicate labour and social relations. The mining world's biggest challenge, in other words.

Thanks to impairment charges and soggy metals prices, Anglo was losing money. Mr. Cutifani embarked on an efficiency drive. Out went the corporate jet and about 2,000 office jobs. In came productivity improvements like the one he pioneered in Sudbury, which he expects will boost operating profits by as much as $2.5-billion (U.S.) a year. About 10 per cent of Anglo's 63 mines and smelters are to be sold. Anglo will put a new focus on engineering skills. Capital allocation is being tightened up to reduce the likelihood of cost overruns, like the catastrophe at its premier Brazilian iron ore project, Minas-Rio. Anglo made two mistakes there. It paid too much for the project – $5.5-billion – then lost control of the costs, which will take the price tag up to an astounding $14-billion. "Anglo American's biggest challenge was Minas-Rio," he says. "That's the project that hurt us."

Next on the to-do list is resolving the South African strike, now in its 11th week, that has shut Anglo's Rustenburg platinum mines and those of two rivals, Impala Platinum and Lonmin. The strike, over wages, has put 30,000 Anglo employees alone out of work and has cost the three companies more than $1-billion in lost revenue. Mr. Cutifani has made it clear that he cannot afford to double the workers' wages. "We would damage our own industry, we would damage Anglo American and South Africa, so we're not going to go there," he says.

I ask if he's prepared to shut the South African platinum mines if the standoff doesn't end. "Yup," he says, without hesitation.

And with that, Mr. Cutifani went back to work. With his shirt sleeves rolled up, and minus a jacket, he looked like he had some digging to do.

Favourite book: Lord of the Rings

Suits are made by: Canali

Board directorships include: chairman of De Beers SA 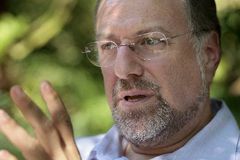