Calin Rovinescu stares past a trolley loaded with improbably large raw steaks and traces a large circle on a tablecloth with his finger.

"There's Toronto!" he says, stabbing his forefinger in the heart of the cloud-white expanse. The surrounding sphere, Air Canada's chief executive officer says with a dramatic flourish, "is our future."

Mr. Rovinescu is mapping his vision for the recovering airline at his favourite lunchtime haunt, 40 Westt Steakhouse. Nestled in one of the many nondescript strip malls that flank Montreal's Pierre Elliott Trudeau airport, the restaurant is a short drive from Air Canada's headquarters.

Ignoring a waiter flourishing plates of uncooked steaks as thick as phone books, Mr. Rovinescu leans intently over the table to launch into a rapid-fire discussion of his plans for the airline he rejoined 18 months ago. Raw ambition is today's special.

"Toronto can be a global world-class gateway," the Air Canada CEO says. "It is a big driver of our future strategy."

Mr. Rovinescu comes by his dramatic flair honestly. The Montreal lawyer began his career advising aspiring film production companies. Now he's promoting an expansionary script for an airline that only a year ago was inching dangerously close to bankruptcy protection.

Air traffic is growing, the balance sheet is repaired, the airline has won a global service award and he is pursuing a bold plan in a fragile economy to expand its lucrative international business-class service. Toronto is key to this strategy because it is at the centre of a large radius of mid-sized U.S. cities that have seen business-class services and international flights pared back by struggling U.S. carriers.

Air Canada launched daily flights to such cities as Cincinnati, Pittsburgh, Syracuse, N.Y. and Memphis earlier this year on the bet that passengers would prefer to fly to Toronto to grab business-class seats on Air Canada's international flights.

By luring U.S. fliers with these new cross-border flights and a new set of international routes to Copenhagen, Athens and Barcelona, Mr. Rovinescu says Air Canada has in the past year more than doubled the number of U.S. passengers who have travelled to Toronto for international destinations.

Air Canada does not release specific details about Toronto traffic, but Mr. Rovinescu says the carrier's total share of cross-border traffic between Canada and the U.S. now stands at 34 per cent.

There are, however, obstacles to this global dream. The Toronto hub can't work, he concedes, unless the airport catches up with other global gateways by building an efficient transit line into the city. It also needs to relax visa rules for visitors who touch down briefly for international connections. Then there is the matter of Pearson Airport's heavy fees.

At the moment, these obstacles are mere details to Mr. Rovinescu. The battered airline that he joined "when the chips were down" in March, 2009, against the advice of some friends, is now "squarely in the middle of a very good story."

Draping his arms across the back of a black leather banquette, he pauses to take a deep breath as he savors the past year. "How could I be anything but optimistic based on what has happened in the last 18 months?" he says.

The most surprising thing about Mr. Rovinescu's leadership at Air Canada is that he is there at all. In 2004 he abruptly pulled the ripcord on his job as Air Canada's chief restructuring officer just as the airline was pulling out of a court-supervised debt makeover. A plan he championed to sell a stake in Air Canada to Hong Kong's Victor Li was in tatters. And his aggressive demands for wage and benefit cuts were so unpopular with the airline's unions that he was known in some quarters as Roving Barbeque.

Mr. Rovinescu says he left a five-year stint with Genuity Capital to rejoin the airline, because "there was a certain amount of unfinished business."

On a corporate level, his challenge was to rescue a company that was being strangled by debts, a massive pension deficit, shrinking traffic and more nimble competitors.

On a personal level, he had to hone leadership and team-building skills that were not always evident during his previous term at Air Canada or during his long career in the sharp-elbowed world of takeovers and restructurings as a corporate lawyer with Stikeman Elliott LLP.

Today Mr. Rovinescu sounds very little like the brash table thumper in the early 2000s who incensed the airlines unions with his demands for cuts to pensions and other benefits. Leadership, he says, pointing his finger again at the middle of the table, "has to come from the centre." He says "I can't deliver" unless the airlines 23,000 employees are "empowered," "inspired" and "motivated."

Air Canada has made strides eliminating what he calls a lingering sense of "entitlement" in the ranks that stems from its past as a Crown corporation. These gains will be tested in the spring of 2011 when most of its union contracts come up for renegotiation, but borrowing another page from the CEO-is-a-coach manual, he says he has faith the unions will be "responsible and constructive."

"People have seen how much we can accomplish when we work together," he says.

A contented and engaged labour force, he says, will be the key to improving Air Canada's service record. Consider, he says, the duty manager who made a tough call in February about a flight in Vancouver.

The manager was in Air Canada's Montreal control room when Vancouver staff phoned to say the flight was delayed because passengers would not budge from an airport television broadcasting the last period of the men's gold medal Olympic hockey game. Although the late plane meant the manager's performance for on-time arrivals would suffer, he ordered staff to hold the flight until the game was finished.

"That was a cool thing to do and I was proud that he made that call," Mr. Rovinescu says.

On the menu: After enduring a few Fred Flintstone jokes about the Stegosaurus-sized steak he initially ogles, Mr. Rovinescu opts for a modest repast of bass and spinach.

Home life: He makes his home in Montreal with his wife Elaine Rovinescu. They have a daughter and son.

Favorite artists: With the help of his fine-arts-trained daughter, he collects works by young contemporary Canadian painters.

Achievement: "I came in when the chips were down and led the company to a different level. It is personally very gratifying."

Goals: To continue to improve the airline's service reputation, while ensuring long-term profitability. 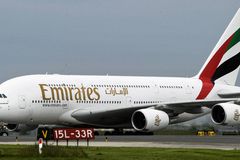