The donors: Family and friends of Judith Buys

The gift: Creating the Beyond First Impressions Project

The cause: YWCA Peterborough Haliburton

The reason: To provide dental services to domestic-violence victims

When the YWCA in Peterborough, Ont., began planning a program to offer free dental services to women who'd been injured in incidents of domestic violence, the agency's board members knew that Judith Buys would want to get involved, given her years of community service.

Dr. Buys, a local dentist, had been a long-time supporter of the YWCA's shelter for women and children, and she often donated her services. She died in August, 2016, at the age of 55 after an accident at a cottage. A group of friends and family, including Dr. Buys's husband, local physician Dr. James McGorman, came together to help launch the YWCA's project as a tribute to her. It's now called the Beyond First Impressions Project in Honour of Dr. Judith Buys and 10 local dentists have volunteered to provide free services to women living in the YWCA's 25-bed shelter. The group also raised $152,000 to cover additional services for women fleeing domestic abuse.

During the fundraising, "Judith's memory has been revisited over and over," said Kathryn Moore, a YWCA board member and project chair. "It has been heartwarming to see how her memory and connection to the program has been instrumental in ensuring its success."

Education: The gift that keeps on giving
May 8, 2019
Arthur Mauro has a vision for Winnipeg as social-justice leader
December 15, 2017 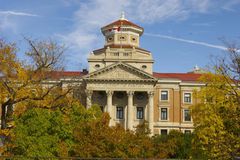