When Isadore Sharp opened his first Four Seasons Hotel in a seedy Toronto neighbourhood, all he wanted to do was make a decent buck off a real estate deal before moving on to the next project.

Fifty years later, he has built one of the most recognized brands in the world. He did it by a strict adherence to what he called the golden rule: "The simple idea that if you treat people well, the way you would like to be treated, they will do the same."

He's no longer running the company - he relinquished the chief executive officer title to Kathleen Taylor in 2010. But he continues to serve as chairman of Four Seasons Hotels Inc., is actively involved in promoting the company's brand and values around the world and has a say in all of its major moves.

The company - which was taken private in 2007 in a $4-billion deal backed by Bill Gates and Saudi Prince al-Waleed bin Talal that left Mr. Sharp with a 5-per-cent stake - will mark its 50th anniversary today with a modest celebration in Toronto and the launch of a website showcasing the company's social responsibility initiatives.

A grander party was planned, but executives felt it was inappropriate following the disaster in Japan. Mr. Sharp spoke recently about the company's legacy and future.

What has been the key to Four Seasons' longevity?

The major hotels were railroad hotels - they were about convenience when travellers got to town and they had different standards. They were the grand old hotels with magnificent halls, and the physical presence of the buildings gave them their image. I looked at it very differently, I didn't think buildings could sustain your position because new buildings will always come along. So we looked at it from the service point of view.

What's been the biggest change?

The accommodations have been dramatically improved. You would sleep, wash and then go out. But today, the hotel is used as an office. The bathrooms are much more comfortable. The space is better. But the biggest change has been in the technology, and how it gives us access to a database - knowing more about our customer has been the biggest change and it has a major impact on sales strategies.

Were there phones in each room at your first hotel?

We had phones, but they were single lines. We were one of the first to put a second phone in the bathroom.

Well, it used to be pretty hard to rush to get to the telephone. There was no answering service then, nobody could leave a voicemail. So we dealt with the situation and installed phones [beside the toilets]

How have you adjusted to a more secondary role?

It's something you don't do overnight, we prepared over a long period of time. I still retain responsibility for what I've always done - I'm still in charge of the development concepts and the aesthetics of the company.

What state is the hotel industry in right now?

A recovery is taking place. Of course the problems in the Middle East and what's happening in Japan will clearly change the results that we were expecting to come from those countries. But in the long term, especially in the Middle East, what is happening will be a benefit for everybody. Businesses will start going back there looking for opportunities.

What role does a multinational corporation have to play in times of unrest or disaster?

We try to assist where we can. An example is Egypt: We have four hotels there. Part of each employee's salary comes from the service charge on the guests. Well, business has dropped off a cliff. The salaries have reduced substantially. But our owners there recognize the importance of the employees, so they are trying to make up part of that lost income. We also try to move people out from there, move them to other hotels. That keeps down the cost at the hotel, and helps the employees.

We've gone through problems, but it's a growth industry. It's a global market - the demographics of the part of the world that was at one point considered undeveloped - China, India, Asia, Latin America - are all part of our economy now. That's a huge force coming into the commercial world and hotels make up an important part of that. This industry is rock solid.

New Four Seasons CEO looks to put her own stamp on chain
September 9, 2010 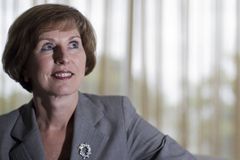