After 25 years in the corporate world, including CEO positions at HMV Canada and BMG Music Canada and stints at senior jobs in the United States, Paul Alofs jumped to the non-profit sector to run the fundraising efforts at Canada's leading cancer hospital, the Princess Margaret.

In nine years there he has helped raise $550-million, and now he is leading a new quest for $1-billion to finance research into personalized cancer treatments. Mr. Alofs is also about to launch a book, Passion Capital, offering his view on how institutions can harness workers' energy and intensity.

Why did you shift from the corporate world to run a major non-profit charity?

My mother passed away from cancer in 2002. That was the huge motivator [and]inspiration. Also [I talked to]a fellow who was providing executive coaching and advice. One thing he said that really stuck with me was, if you can find something in your life that makes you cry, and you can do something about it, then that's what you should be doing. That was a profound inspiration to me.

Were you also looking for a new challenge from a work perspective?

[I had]a short but very profitable stay in the dot-com world in 1999. So I had a little bit of money [and was]able to say, what exactly do I want to do next with my life? I was doing some other not-for-profit work and I was loving it. I started to think, okay, I've got all of this energy that I want to put forward, so what do I want to do next?

How does your business background inform how you run this organization?

In terms of engaging people behind a strongly held vision, and engaging individuals to put their heart and soul into their work. The not-for-profit sector is served by volunteers. These are people who work for free and a lot of them report that this is the most fulfilling part of their week. [I realized that if]companies could engage people's passion, they could be much more successful.

You don't like the term "not for profit." Why not?

Referring to this sector [in terms of]what we are not, as opposed to what we are for, is the wrong starting point. The sector has to do with capturing people's stories, creating a cause and then trying to find the support to do something important for society. We generate social capital and good for society, [and that is]more important than a lot of other sectors that just generate profit.

What is a better term?

I think "social profit" is a great way to talk about it. We provide a social value to the community.

Do people resist the idea that charities need to be more entrepreneurial?

Yes, [but]there is a new world out there. Government does not have the money, [so]where is it going to come from? [We need]the best practices of the private sector, [while]recognizing the heart and soul and the passion that comes from people engaged in the social profit sector. Organizations that serve social causes need to be way more entrepreneurial and business-driven than they traditionally are.

Your hospital's fund-raising lotteries garner some criticism. Why do you use that means of raising money?

The largest private sources of funding for cancer research in Canada are the two Princess Margaret lotteries. People say, "That's terrible, that's wrong, you shouldn't have to run lotteries to support a top research centre." [But]that is the reality of life. With all the cutbacks that are coming, organizations like ours will have to get a lot more creative about how we generate funds.

What is your response to those who say you spend too much on prizes, marketing and administration for the lotteries?

People win beautiful and amazing real estate that we have to pay for. We outsource [the lotteries]to a company based in Saskatoon. They do a spectacular job, and we don't need to hire all those people. Without that funding we wouldn't likely be one of the top five [cancer research hospitals]in the world.

How do you get attention from donors?

It is extremely competitive. We cut through the clutter by having a very focused statement of belief, and having the bold ambition to conquer cancer in our lifetime. That gets attention. We have an incredible number of events where doctors talk about how we are using the money. Whether someone buys a lottery ticket, or gives us a donation for $1-million, they can meet the doctors who are using their money.

How important is marketing and advertising to the fundraising sector?

What I have found is that 90 per cent of success is about the performance of your product or your organization, and about 10 per cent is about marketing. All of the success of Princess Margaret is about what goes on at the hospital. We've been recognized for our fundraising success and our marketing success, but without the people who deliver the care, the research and the science, there is absolutely no way we would be successful as a fundraising organization.

What do you mean by "passion capital"?

While I worked in the private sector it was all about financial capital [and]intellectual capital. Then there is technological capital. But to me all those were wanting. One of the things I've learned here is when you can align someone's passion with their action, it becomes an incredible force. The world's most valuable asset is passion capital.

Would you ever go back to the private sector?

Working in a cancer hospital all day is hard. But instead of pushing me away or making me feel burned out, it has engaged me and inspired me. [If I went back to the private sector]it would have to be something I was deeply passionate about.

What is your advice to young people who would like to work in the not-for-profit sector?

I think young people who will go on to really have great careers – both personally fulfilling and also very successful – will be individuals who go back and forth between the private sector and the social enterprise or not-for-profit sector. You will see people in a startup company, working for a large business, working maybe for a government department, [then]working for some social enterprise. The true leaders … will have spent time going back and forth between sectors.

Bachelor of commerce, University of Windsor

1999: Worked briefly as head of online music site MP3.com, then returned to Canada as a private investor. 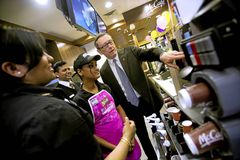 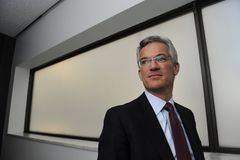 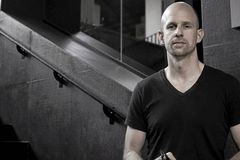