Imagine a world of work without overtime, unsavoury projects or unexpected deadlines. There are no grinding commutes, no annoying co-workers, no set hours, no uncomfortable chairs, not even any walls.

This may sound so idealistic it seems unrealistic. But for millions of people around the world, this is the reality of work.

Powered by a new generation of virtual office environments, nimble employers looking to gain an edge or cut costs are increasingly outsourcing to remote contractors. Millions of freelancers across the globe – from Web programmers to writers to accountants – now pay their bills exclusively through online work.

The trend, say the companies driving it, comes amid a global upswing that could permanently alter the future of non-physical "knowledge work."

"By 2020, we think one in three people in North America will be working online," said Gary Swart, chief executive officer of oDesk, the largest online platform designed to connect employers with freelancers. The Redwood City, Calif.-based service has more than 2.7 million freelancers and 540,000 customers worldwide. More than 24,000 Canadian companies currently use oDesk.

"What we're seeing is people creating their own profiles on oDesk and leaving their firms, understanding they can have freedom, flexibility, jobs of their choosing and multiple clients," he said.

More than 1.3 million jobs were posted in 2012 on oDesk. Elance.com, a California- and Norway-based competitor, posted more than one million jobs this year – an increase of more than 50 per cent over 2011, said Rich Pearson, the company's chief managing officer.

"It used to be that working online was considered somewhat unusual," said Chris Guillebeau, author of a blog and book titled The Art of Non-Conformity. "We're in the midst of a genuine revolution for those pursuing creative self-employment."

Underpinning it are companies such as oDesk and Elance, which are carving out a niche by simplifying the logistics of the employer-employee relationship. While details vary by platform, most allow contractors to post a profile, take proficiency tests (results are posted publicly) and set their own pay rates.

The system enables a swath of contractors to earn more than they would in conventional jobs.

"The money is so much better that I couldn't even compare it to working in a traditional company," said Bernard Vukas, a Manila, Philippines software engineer who turned to online work after being laid off from his job in Croatia. He started billing hourly at about $11 in 2008 and now charges $150.

Stringing together contracts, he said, has given him exposure than he would not have had otherwise.

For many, the magnetism of online work is in its flexibility. While not all vocations command triple-digit hourly rates, most allow freelancers to determine their own schedules and locales – something traditional workplaces have been slow to warm up to.

Amy Sept, a communications specialist in Belleville, Ont., began doing more online work after she became engaged to a member of the Canadian Air Force. While she hasn't had to move yet, she expects she will in future.

"I realized that to keep doing the work that I love, and hopefully not have everything upended every time we move, I needed to take control of my career," she said.

By building an online network of contacts, Ms. Sept has not only insulated her professional life from the geographic volatility of her personal life, but also against local economic ups and downs.

The same is true for the legions of skilled online workers who are based in troubled economies. By signing up with oDesk.com or other companies, freelancers from the Philippines, India and other countries can find steady work without having to move, perhaps leaving their homeland and families.

For employers, access to virtual clearinghouses of freelancers with verified skills deepens the potential talent pool. The tools provided by oDesk and others (such as organization systems to manage interviews, contract templates, a built-in work tracking and payment systems) make hiring easier and faster. Through oDesk, for example, hiring takes about four days, according to data provided by the company, compared with about 25 days for an on-premise worker.

"As a startup, you don't have a lot of money. And there's not a lot of time because the market moves so quickly," said Vlad Barshai, co-founder of Reachli, a Toronto-based company that specializes in improving brands' online marketing strategies.

The trick, he said, is figuring out which portions of work are suitable for outsourcing.

"To some extent, [online work] is great, but you can't take it to an extreme," said Mila Lazarova, an academic at Simon Fraser University in Burnaby, B.C., who holds a Canada Research Chair in Global Work Force Management. "There might be a tipping point where if you start contracting too much out, you begin to lose core competencies as an organization," she said.

On the flip side, companies that strike the right balance may gain a competitive advantage. 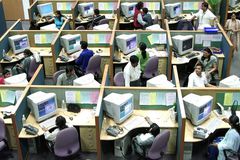 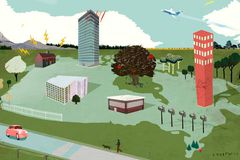