Does the tech sector have a diversity and inclusion problem? A quick scan of the news suggests it does.

Thirty-one Canadian technology companies were recently asked if they collected data on the diversity of their employees. Only two companies, OTTO and Wealthsimple, shared numbers. Other startups volunteered data, including Borrowell.

It's encouraging we're talking about pursuing diversity. But we fail to mention what happens when we get there.

Embracing diversity is uncomfortable. It requires constant, ruthless, self-assessment and correction. It requires a fundamental change in what we do, say and think.

And that's a good thing.

In the end, it's more than worth it. In fact, being uncomfortable is the whole point of pursuing diversity in the first place, because diversity makes good business sense.

Here are four specific principles that we live by at Borrowell to help turn diversity from a mere people policy into "the way we do things." These can apply to any company, from a tiny startup to a market leader.

The point of diversity is to surround ourselves with people who think and act differently than we do. The business value of diversity lies in having our views challenged. This is uncomfortable, and it's exactly the point.

As leaders, we must surround ourselves with people who aren't like us. We try constantly to be in the same room with people who challenge not only our day-to-day thinking but the way we view the world.

We put the right people in places and expect them to challenge our dearly held beliefs. This gets uncomfortable at times. But we're not going to generate new ideas with homogeneous thinking.

We have a commitment to gender parity at Borrowell. Currently, 40 per cent of our team is made up of women and 60 per cent of our CEO direct reports are women. Qualified women are out there.

Don't blame a lack of candidates for your lack of diversity. Just because they aren't applying doesn't mean they don't exist. Fintech is at the nexus of two traditional and conservative industries. If we waited for our ideal candidates to come to us, we might be waiting for a long time.

We go into these communities to actively pull people into our organizations.

Once these people are in, we empower them to be ambassadors in their communities and pull more people in. We formally do it at Borrowell with our ambassador program. We encourage employees to attend as many community events while wearing a Borrowell T-shirt as they would like, and we'll pay the ticket cost.

Communities tend to gravitate to companies where there are other members of their community.

Welcome to the power of "exponential pull."

It's human nature to be wary of the unknown. In talking to other business leaders about making accommodations, we hear the same excuses: it'll be too expensive, too disruptive or too difficult.

In reality, setting up a business and workspace for a diverse employee population to thrive isn't necessarily rocket science.

As a lesbian, a new parent and a woman with a broken ankle, I was a somewhat textbook diversity hire.

I vividly remember a conversation with our CEO and COO in the interview process. They said, "We realize you're in a unique point in your life. Let's find a start date that we're comfortable with. We're open to start you part-time. And by the way, if you need a fridge and room for breastfeeding, we can make it happen."

The total benefit to a new mom like myself compared with the total cost of a small bar fridge was monumental. Diversity is accomplished through multiple small accommodations like this.

Committing to diversity might mean holding a position open for longer than you expected. It might mean alternative working hours, locations or technologies.

My own conventions of mobility were disrupted when I broke my ankle a few weeks before starting at Borrowell. Only then did I notice that our headquarters were accessible.

We all have a responsibility to challenge our biases. As a "diverse" employee myself, I was blind to other forms of diversity until it impacted me.

In short, diversity by definition requires challenging our own conventions. Discomfort is a clue we know we're headed in the right direction.

I was recently asked why tech is singled out for its diversity problems. As tech trends to a younger work force, there's an assumption that we'd be better at it. This criticism, though uncomfortable, is a compliment. We don't have all the answers. We're trying to ask the right questions.

There's a reason diversity is getting serious attention from the media, business and non-profits alike: because people care. There's an appetite for ideas and a market for solutions.

Borrowell believes in people and has been proven right time and time again that our belief was well-founded.

This belief goes both ways. Just as employers believe in the power of a diverse work force, employees should believe that if they speak up, they will find solutions.

But after all, isn't that the point? 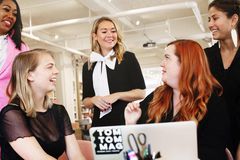 It’s human skills – not technical skills – that we need the most in today’s work force
August 8, 2017

Effective multinationals think globally but act locally
August 8, 2017
Is your company ready for innovation?
July 29, 2017
Closing the gender gap requires commitment of both genders
July 27, 2017
Follow us on Twitter @globeandmail Opens in a new window
Report an error Editorial code of conduct
Due to technical reasons, we have temporarily removed commenting from our articles. We hope to have this fixed soon. Thank you for your patience. If you are looking to give feedback on our new site, please send it along to feedback@globeandmail.com. If you want to write a letter to the editor, please forward to letters@globeandmail.com.
Comments